On December 13, 2018, in Chernihiv the Town Hall Meeting “Implementation of the Law of Ukraine “On Legal Aid” took place.
The event was organized by the Agency for Legislative Initiatives within the project “Ensuring Access to Justice in Ukraine: Ethical Standards and Institutional Aspects” with the support of the Law Enforcement Section of the US Embassy in Ukraine. The project aims directly at the comprehensive provision of the rule of law principle in Ukraine by strengthening the institutional capacity of the advocate’s self-government and strengthening the place of ethical norms and standards in the work of lawyers for the better protection of human and citizen rights. The urgency and necessity of the event for Chernihiv residents was confirmed by a large number of participants, more than 70, who expressed their desire to participate in the discussion of a number of problems of provision of legal aid. Among the participants were: lawyers, human rights activists, public activists, representatives of the Novozavodsk District Court, Chernihiv Appeal Court, Chernihiv Regional Council, Chernihiv Regional State Administration, Main Directorate of the National Police in Chernihiv Oblast, Desnianska District Council in Chernihiv city, legal advisers of Chernihiv City Council, students and lecturers of Chernihiv National Technical University, cadets of the Academy of the State Penitentiary Service, as well as ordinary citizens, who are not indifferent to the state of the legal aid system in Ukraine. 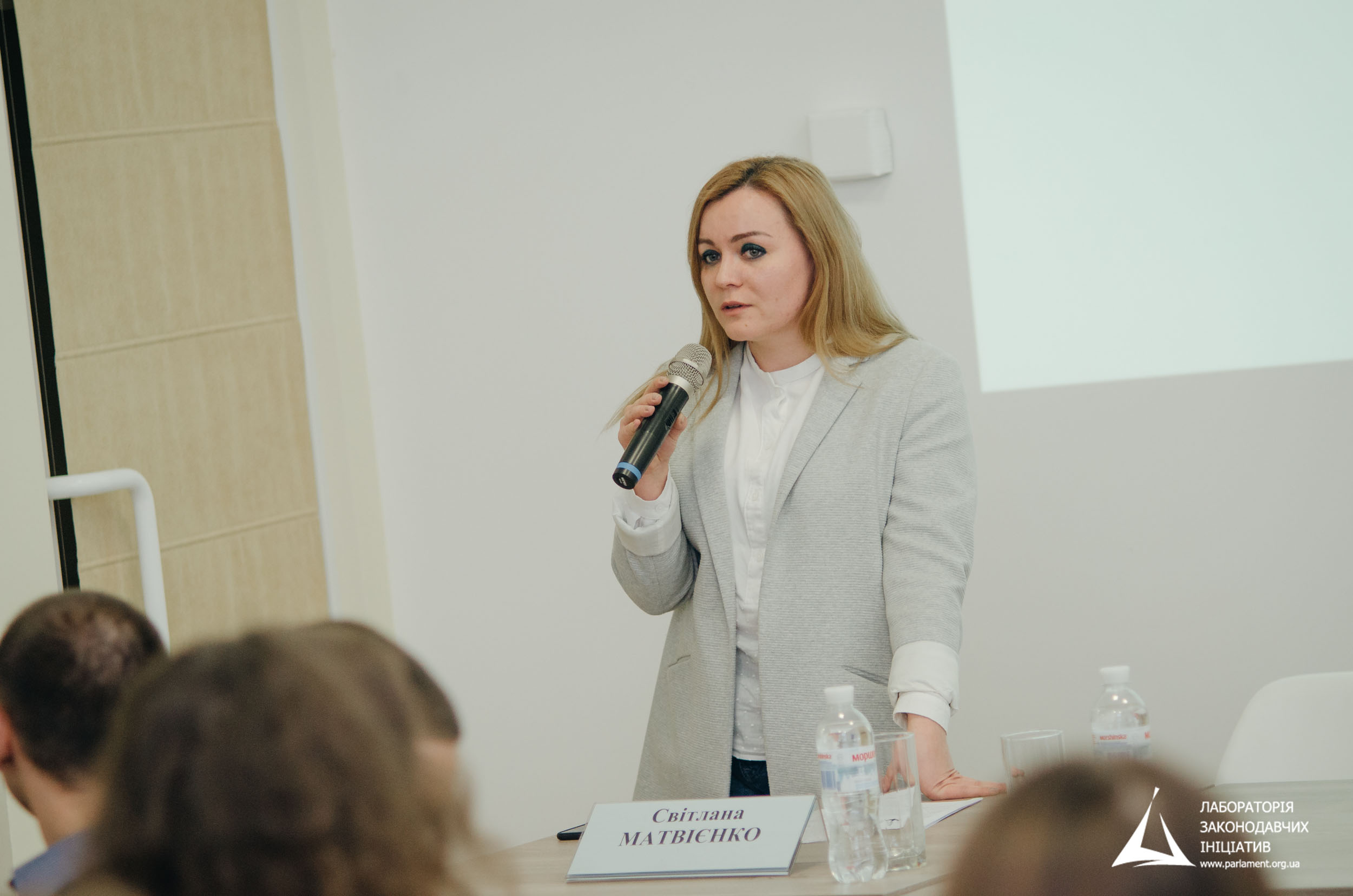 During her introductory speech Svitlana MATVIIENKO, Chairwoman of the Board of the Agency for Legislative Initiatives, stressed the need to bring up the discussion of providing legal aid to a new level in order to develop effective and efficient mechanisms for the provision of this type of service..

Legal aid provides access to legal protection for a society, since the right to professional legal assistance, including free of charge, is guaranteed by article 59 of the Constitution of Ukraine, and provided by a number of conventions and international documents, which are part of the international system of ensuring human rights. Sometimes, legal aid is the only opportunity for insecure groups of people to get legal protection and representation of their interests in court or during communication with other state bodies. 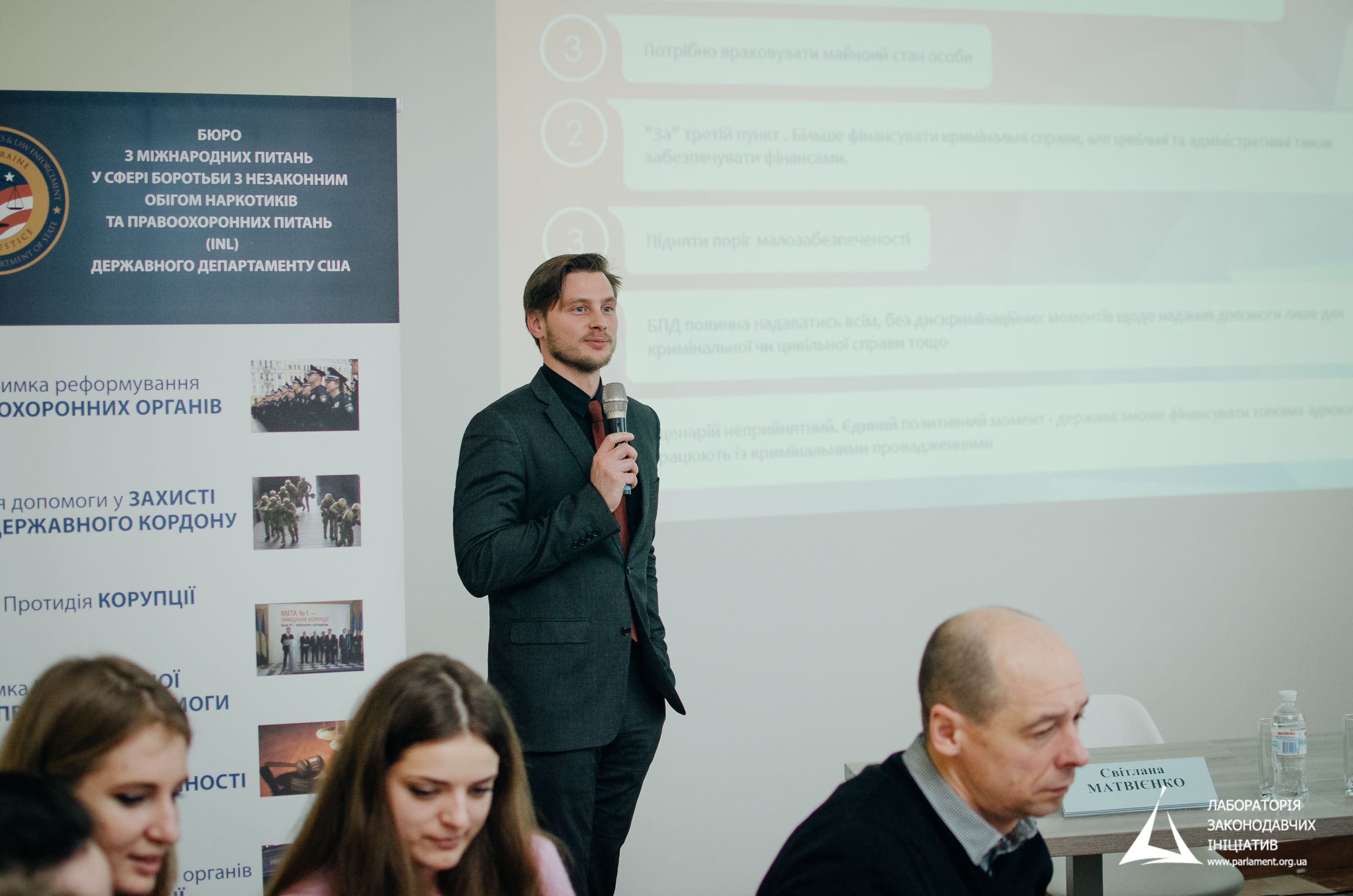 Oleksandr ZASLAVSKYI, Deputy Chairman of the Board of the Agency for Legislative Initiatives, introduced to the participants the Town Hall Meeting (THM) format, and also emphasized the importance of such formats in decision-making both at the national and local levels:

The THM format is primarily intended for public participation in decision making at the local level. In particular, it is great for finding out the community’s priorities when forming a local budget. However, this format can also be used to discuss options for solving more complex problems, and even draft legislation. Participants of the event got acquainted with the main aspects of legal aid provision, the grounds for its provision, and peculiarities of primary legal aid and secondary legal aid.

During an active two-hour discussion the participants discussed the proposed scenarios and developed their own approaches to the issues of the financial and organizational basis for providing services in legal aid system, the subordination of legal aid system, as well as improving the accessibility and quality of the provision of these services.
As a result of lively discussions, voting on scenarios took place. The scenarios address the main issues of providing legal aid.
After the discussion on the system of financial and organizational basis for the provision of services, the status quo scenario, that is, the implementation of the law “On Free Legal Aid” unchanged, won the vote. For this option, 67% of the participants gave their votes. The option to diversify the sources of financing of secondary legal aid between the state budget, local budgets, as well as recipients of free legal aid came second (21% of votes).
The smallest number of votes (12%) was given to the version according to which state funding is guaranteed primarily or exclusively for secondary legal aid in criminal proceedings. 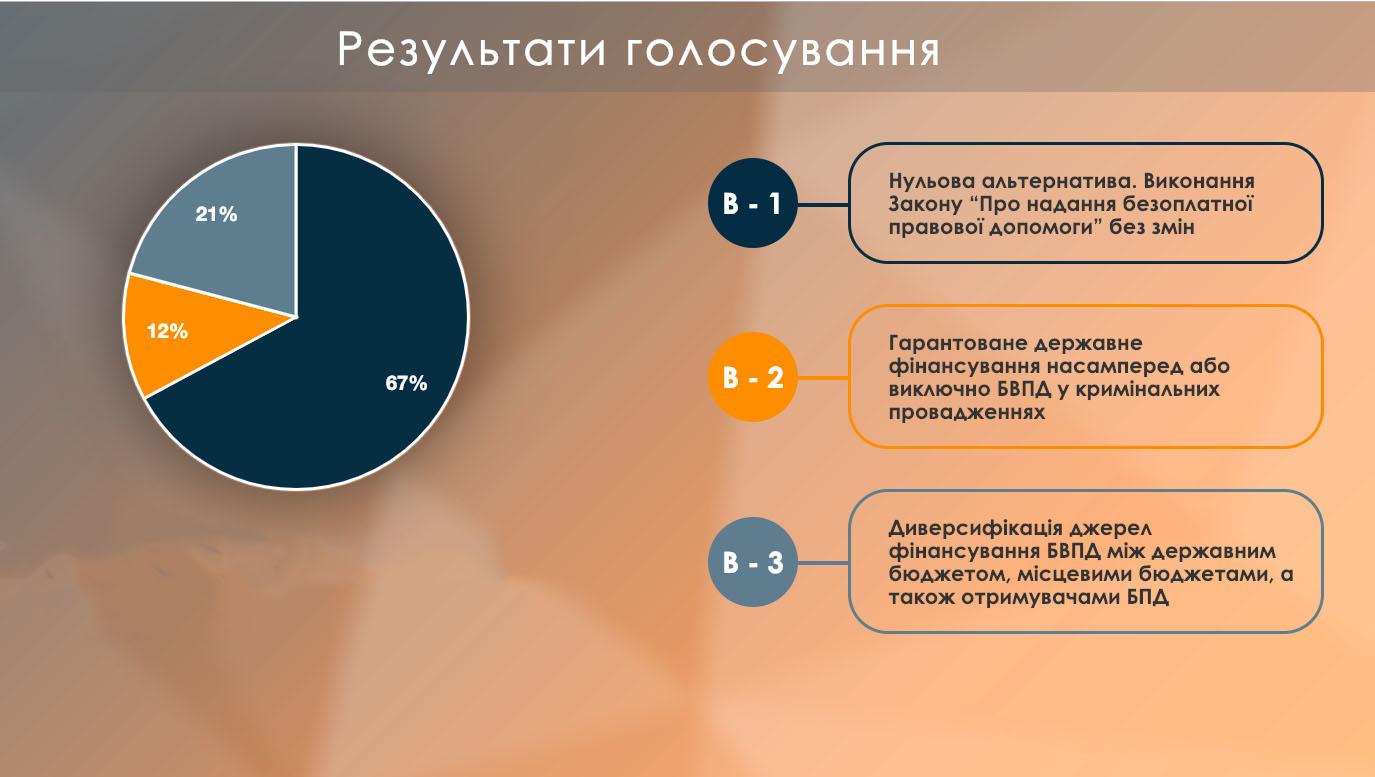 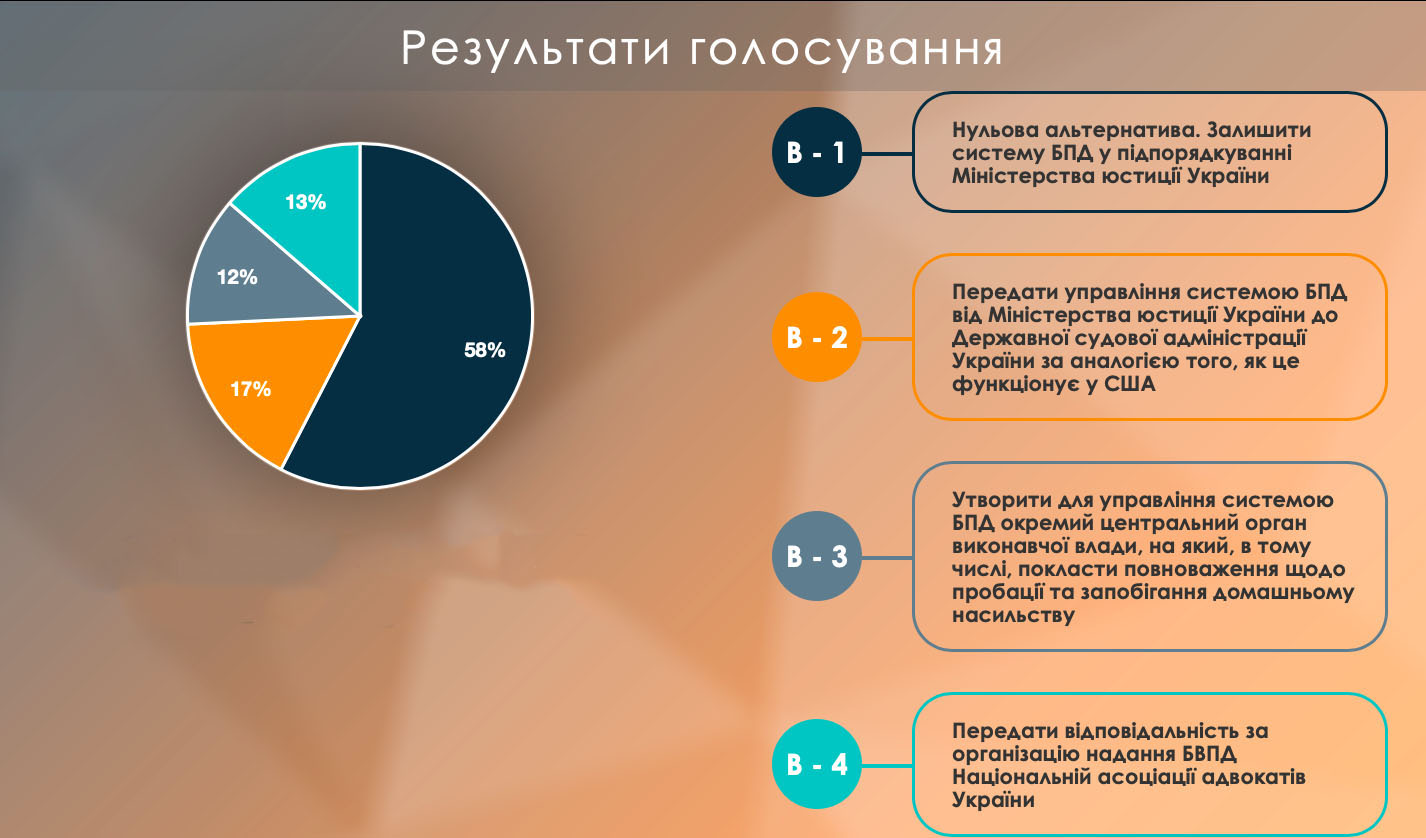 During the voting for the third problem (Improving accessibility and quality of the secondary legal aid), each participant had the opportunity to cast his or her vote for more than one option. This is due to the fact that the proposed options in their essence are not so much alternative as complementary, that is, they can be implemented in parallel or in a complex. The largest percentage of participants of the event voted for the option of introducing an additional mechanism for issuing certificates with the option of free choice of lawyer by the recipient of the secondary legal aid (32%). The status quo option took the second place, that is, to retain the existing mechanisms provided for by the Law of Ukraine “On Legal Aid” (30%). The third place was taken by the involvement of private lawyers on a contractual basis (18%). Scenario 5 (assigning a lawyer to provide a certain amount of legal aid pro bono) and Scenario 3 (mandatory verification of the quality of the legal aid) were the least popular (10% support each). As well as during the discussion of problems related to the Rules of Legal Ethics(December 11, 2018 in Zhytomyr), the systemic problem of lack of open discussions about the prospects for development of legal aid system in Ukraine became obvious.
The opinions and proposals of the participants, the voting results, which were recorded during the discussions, after processing and including in the report, will be sent to each participant of the events in Chernihiv and Zhytomyr, as well as distributed among the wider range of stakeholders.