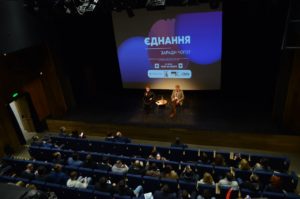 This year the USPS Conference took place in the Theatre on Podil and was dedicated to the topic “Uniting. For what?”. The conference also took place in solidarity with USPS alumna Kateryna Handziuk and other activists who suffered attacks all over Ukraine.
The Conference traditionally gathered alumni of different years, from the first USPS program in 2005 to 2018. In the end of the Conference, participants of the program of 2018 received their diplomas. The Conference was also attended by friends and partners of the School. 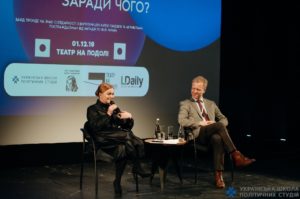 Svitlana Matviienko, Chairowman of the Board of the Agency for Legislative Initiatives, and Marten Ehnberg, Head of the Council of Europe Office in Ukraine, addressed the audience with opening remarks. Svitlana called USPS “a network of changemakers” that remains untouched and unshaken throughout time. Marten recalled how joint history of the School and the Council of Europe started.
The speakers also spoke about latest important political and social events, particularly the USPS project “New Leaders”. After the opening remarks, USPS alumnus and President of the ICTV channel Oleksandr Bohutskyi talked about conclusions drawn from the TV project “New Leaders” that provided support for civic activists, volunteers and important social projects. Talking about the winner of the project, an activist and local politician from the East of Ukraine, he said: “I believe this is an absolute success. Just think about it: the winning project was the environmental one by an activist from Mariupol”.
The first panel discussion was with Sviatoslav Vakarchuk. He talked in his capacity of civic activist and not as a singer. “I was expecting to just read my speech but I can see that you invited me for a discussion”, Sviatoslav was pleasantly surprised. And the discussion was indeed interesting, with all kinds of difficult questions. Sviatoslav talked about possible changes in Ukraine comparing us to more developed countries like Britain: “Ukraine is a less established state, which is why it is much easier to transform it”. 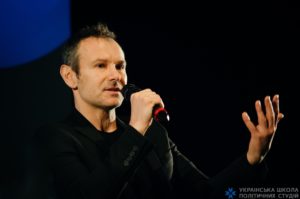 Sviatoslav answered many difficult questions from moderator Svitlana Matviienko and from alumni about fear for own safety, about populism, about more active citizen participation, about reintegration of Donbas and Crimea. “It is not important who you are – a businessman, an artist or an engineer – when it comes to the question whether to participate in politics or not. It is the desire to change the country that is important”, said Sviatoslav talking about businessmen, journalists and artists who became politicians after the Revolution.
After the discussion with Vakarchuk, Andrii Baumeister, professor of philosophy at Taras Shevchenko National University, took the stage. He spoke about unity. His main thesis wat that in order to become united, society must overcome the natural contradictions between the interests of the majority and the individual interests, find common values for all fragmented social groups in the country, and crystallize a unique public discourse. Apart from the question of what the state should be, the philosopher drew attention to the problem of public discourse of the EU. It manifests itself in constant “smoothing of the corners” and avoiding of complex topics for discussion. Market and political rules have long been holding back the degree of debate in the EU. However, if Ukraine finds its own way, its discourse may become both European and more frank. 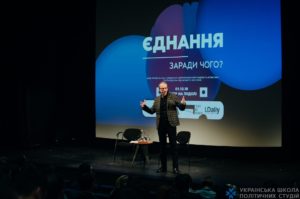 The next speaker, Ivanna Klympush-Tsyntsadze, Vice Prime Minister for European and Euro-Atlantic integration, also spoke about Ukraine’s own way.
“Russia is still not ready to let Ukraine out of its arms. It gives us another test for stability and ability to protect ourselves,” she shared her political forecasts and beliefs. She also discussed the risk of radicalization of society as a result of the fatigue of the war, economic and social problems, the change in the tactics of the Russian Federation, and so on.
Ivanna criticized not only the Russian Federation, but also the conflict surrounding the process of the introduction of a martial law in Ukraine: “That day we forgot how well we are able to unite in the face of an external threat.” 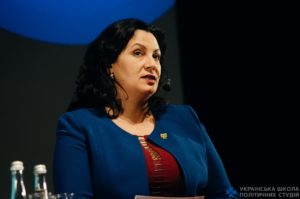 However, she also stressed that over the past 5 years Ukraine had accomplished “incredible things” and thanked everyone who came to the public service and adequately withstands the complexity of this work.
Akhtem Seitablayev, actor and film director, also thanked new civil servants. His speech was dedicated to the topic of culture as a factor of unification of people. Through different narratives Akhtem proved and arts and culture can unite people in spite of political and historic conflicts, particularly, when it comes to Crimea and the rest of Ukraine. Akhtem also talked about Crimea, namely the cultural ways of uniting the Crimeans and, in particular, the Crimean Tatars. The director is convinced that new forms of unification of Crimean Tatars are possible even in the present time of occupation and “Crimean” skepticism. 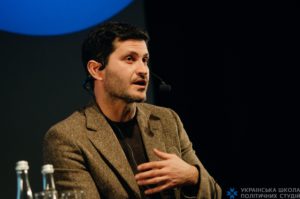 The Crimean topic closed a block of discussions with experts. After a break, Kateryna Zagorii, USPS alumna and the founder of the Zagorii Foundation talked about joint projects of USPS alumni and the School and how alumni can support the community.
A new partnership of the School was also announced, with a magazine LDaily, an analytical business magazine.
The Conference concluded with a play “Six Characters in Search of an Author”, the complex story of the search for real values from the Nobel Prize winner Luigi Pirandello performed by the troupe of the Kyiv Academic Drama Theatre on Podil under the direction of the People’s Artist of Ukraine, winner of the Taras Shevchenko National Prize Vitaliy Malakhov. 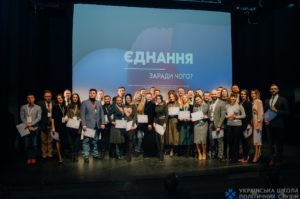