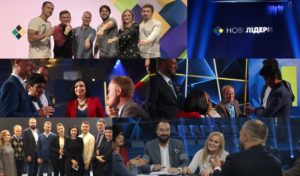 The national television project “New Leaders” has ended, which came to existence with participation of the Ukrainian School of Political Studies and the Agency for Legislative Initiatives.
For over 13 years the Ukrainian School of Political Studies has been developing a network that connects successful and driven representatives of various fields (civil servants, lawyers, businessmen, scientists, politicians, journalists, activists and artists), leaders who determine the future of Ukraine.
In line with this mission, along with more than 30 key NGOs in Ukraine and the StarLightMedia group, USPS has launched the National Television Project “New Leaders”. This project’s goal is to find active, energetic and ambitious leaders who know how to change Ukraine and are ready to start implementing these changes today.
Guarding the project’s non-partisanship, transparency of rules and their compliance by all participants is Civil Supervisory Board, formed by leading NGOs of Ukraine. The Board is an independent and impartial supervisory authority and has formed the Selection Committee of the project.
The Selection Committee includes: Olga Aivazovska (Civic Network OPORA), Roman Bondar (Odgers Berndston Ukraine), Hlib Vyshlinskyi (Center for Economic Strategy), Andriy Vyshnevskyi (NGO “Lawyer of the Future”), Tetyana Durnyeva (Public Holding “Impact Group”), Svitlana Matviienko (Agency for Legislative Initiatives, Ukrainian School of Political Studies), Tamila Tasheva (NGO “Crimea-SOS”), Yaroslav Yurchyshyn (Transparency International Ukraine).
The project started in March. Altogether, nearly 1,400 applications were received from across the country, 854 of them passed the preliminary check and inspection. Following the principles of transparency and openness, the New Leaders site was screened for security, the votes were constantly checked, and several leaders were excluded from the project for certain violations of the Code of Conduct.
100 leaders were selected: 50 leaders received the largest number of votes from the voters and 50 leaders were selected by the Selection Committee. Of these 100 leaders, the Selection Committee selected 10 candidates who went onto the live shows. And among those TV viewers chose the winner of the project.
During the project the University of Leaders was organized for leaders and viewers online, which aimed to provide the project participants and other interested citizens with an educational platform for the learning and making new skills that modern leaders need. The lecture archive is available at https://novilidery.com/university-of-leaders.
The television part of the project started in October and lasted through November.
Among the participants of the project, there are 22 alumni of the USPS and 5 alumni of the School of Community Leaders. The first show was watched by over 2 mln viewers. Three USPS alumni went through to the top-10: Gennadiy Druzenko (2006), Oleksandr Slavskyi (2014) and Olga Matyushyna (2018). Many other alumni took high positions in the overall rating: https://novilidery.com/news/vidbirkovii-komitet-opriludniv-protokol-golosuvanna-za-prezentacii-usih-ucasnikiv-novih. Olga Matyushyna was a finalist of the project.
During the project period, almost 5000 commercials, stories in news blocks were shown and 7 shows were made. The audience on the Internet was about 8 million people and more than 300,000 viewers. Overall coverage (18+) was 26.3 million people. Every 4th Ukrainian among young people watched the show.