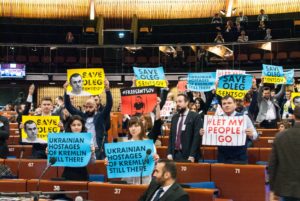 This year’s USPS delegation participated in the World Forum for Democracy that took place on 19-21 November in Strasbourg.
World Forum for Democracy that is annually held in the Council of Europe in Strasbourg is always a part of the program of the School. This year’s Forum’s topic was “Gender equality: Whose Battle?”. What role does unequal division of powers between men and women play? How to avoid gender-based violence? Why now, in 2018, gender stereotypes still hinder women’s ability to achieve their goals in civil, political and economic areas even in democratic states? How exactly all of us, women and men, can win from gender equality? These and other topics were raised during three days of the Forum.

First day of the Forum

First panel discussions were dedicated to the following topics:
–      Women and power: towards 50/50;
–      Problem of sexism, discrimination and violence against women;
–      Security, democratization and women.
USPS delegation addressed the audience at the Council of Europe several times this days with questions regarding the attacks on civic activists, securing rights of women on the territories occupied by Russia – Crimea and Donbas, and gender equality in different professional spheres.

Second day of the Forum

On this day, USPS participated in round tables and labs on the following topics: artificial intelligence and gender equality, women and migration, feminist investigative journalism, religion and feminism, women in cinema etc. USPS participants also met with Permanent Representative of Ukraine in the Council of Europe Mr Dmytro Kuleba and Ukrainian Judge of the European Court of Human Rights Ms Hanna Judkivska. The delegation discussed topical issues for Ukraine at the Council of Europe, possibilities for development of institutions and reform of Ukrainian diplomacy. With Ms Hanna Judkivska at ECHR, the delegation discussed difficulties of implementation of decisions of the Court in Ukraine and reasons for popularity of the Court among Ukrainians.

Third day of the Forum

The morning of the last day of the Forum begain with a protest of the USPS in the PACE hall in support of Oleh Sentsov and other political prisoners of Kremlin. The protest took place during the speeches by the former and incoming chairs of the Committee of Ministers of the Council of Europe – Vice-Prime-Minister of Croatia Marija Pejcinovic Buric and Finland’s Minister for Foreign Affairs Timo Soini. Symbolically, this day was also the anniversaity of the Euomaidan, 21 November.
The same day USPS delegation also held a protest in the Council of Europe telling the story of Kateryna Handziuk, an activist and USPS alumna of 2015, as well as other 50 unresolved attacks on activists in Ukraine.
Later, the Forum was closed with a plenary session “Women, security and democratization” where conclusions were made. USPS Director also received diplomas for School’s students.