On 8 November 2018, a presentation of the situational analysis “Questions on Ethical and Professional Standards of the Apparatus of the Verkhovna Rada of Ukraine ” was held. This research has been prepared by the Laboratory of Legislative Initiatives with the support of the Konrad Adenauer Stiftung Ukraine Office.

The research is devoted to assessing the level of civil service’s standards integration into The Apparatus of the Verkhovna Rada of Ukraine. The goal is to identify problematic aspects of parliamentary administration and to develop the most effective ways of reinforcing the Apparatus institutional capability. To accomplish this objective, we interpreted quality criteria of civil service in accordance with the Ukrainian Law “On Civil Service”, reviewed relevant legislative framework, examined the results of Apparatus civil servants’ interviewing and compared Ukrainian and international experience in the implementation of ethical and professional standards of the parliamentary service.

The opening words of the key speakers

Svitlana Matvienko, the Chairman of the Council of the Laboratory of Legislative Initiatives, thanked the Representation Office of the Konrad-Adenauer-Stiftung Ukraine for fruitful cooperation and noted that the study would not have taken place without the engagement and high-level commitment of the Apparatus of the Verkhovna Rada of Ukraine, as well as without the people’s deputies who took the initiative and did their utmost to assist in the preparation of the study. Svitlana noted that it was difficult to assess the situation in the Apparatus in such a manner as to preserve the credibility of its workers who kindly agreed to provide experts of the Laboratory of Legislative Initiatives with all needed information.

“We hope that this study will constitute the beginning of changes in the Apparatus, because the heart of democracy, the parliament, cannot work without a blood system, the Apparatus”. 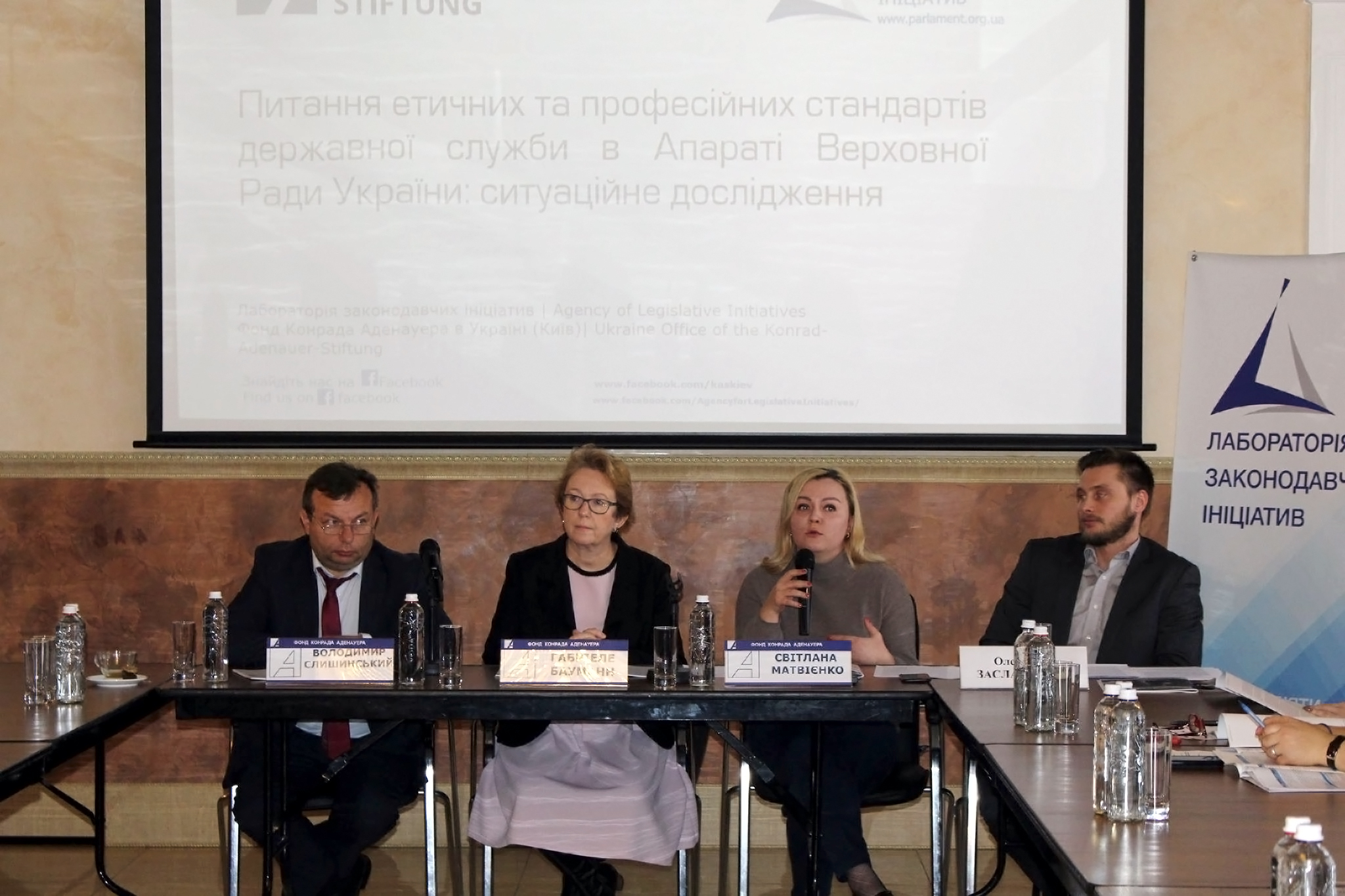 Svitlana also stressed out that the researchers relied on a qualitative methodology. This means that if at least one servant of the Apparatus describes any violations of standards, the presence of problems in the Apparatus is automatically evident.

Finally, Svitlana Matvienko emphasized that the presence of the Verkhovna Rada of Ukraine leadership at the presentation proves that it is possible to improve working processes of the whole Apparatus:

“We are well aware that it is very difficult to ensure independent and impartial work of the Apparatus without the political will and desire. However, we need to keep having the conversation on these processes. Raising issues, we give people the opportunity to express themselves and transform the agenda. Therefore, I hope that this is a mutual movement and just the beginning of a great deal of work”.

Gabriel Baumann, the Head of the Representative Office of the Konrad Adenauer Foundation in Ukraine, thanked the Laboratory of Legislative Initiatives for a scrupulous study and expressed appreciation for the recommendations suggested in the study. 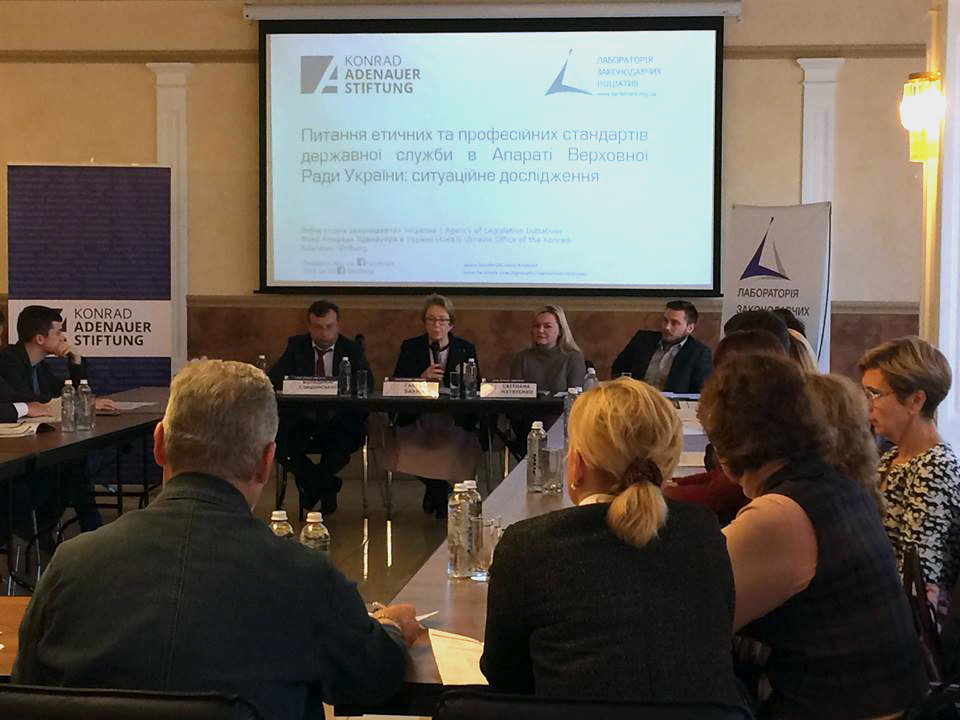 Ms. Baumann noted that the main question of the study is how to integrate European values into the civil service and how to improve the performance of civil servants:

“Ultimately, we want the Apparatus to work qualitatively, professionally and, most importantly, to receive the citizens’ trust. Remember, the trust of Ukrainians in their parliament is at a rather low level now”.

Vladimir Slishinsky, the First Deputy Head of the Apparatus of the Verkhovna Rada of Ukraine, noted that it is a very important study for his employee because they are especially interested in the uninterrupted work regardless of what is happening around them:

“Unfortunately, the parliament has a rather low level of trust. However, it does not matter how low it is. Any state conflicts or very difficult global situations are still being solved with the help of Apparatus. From my point of view, it is important that this is ensured through the professionalism of our servants who, despite constant political pressure, continue sticking to their principled impartial position”.

Mr. Slishinsky also drew attention to the fact that despite elections and changes in the deputy corps, the Apparatus servants remain in their posts. Consequently, they must be so professional and wise in order to perform their professional duties at a high level despite political perturbations, as well as to help deputies who have just begun working in a new parliament. Finally, they should make well-informed decisions because they literally define the functioning of our state. 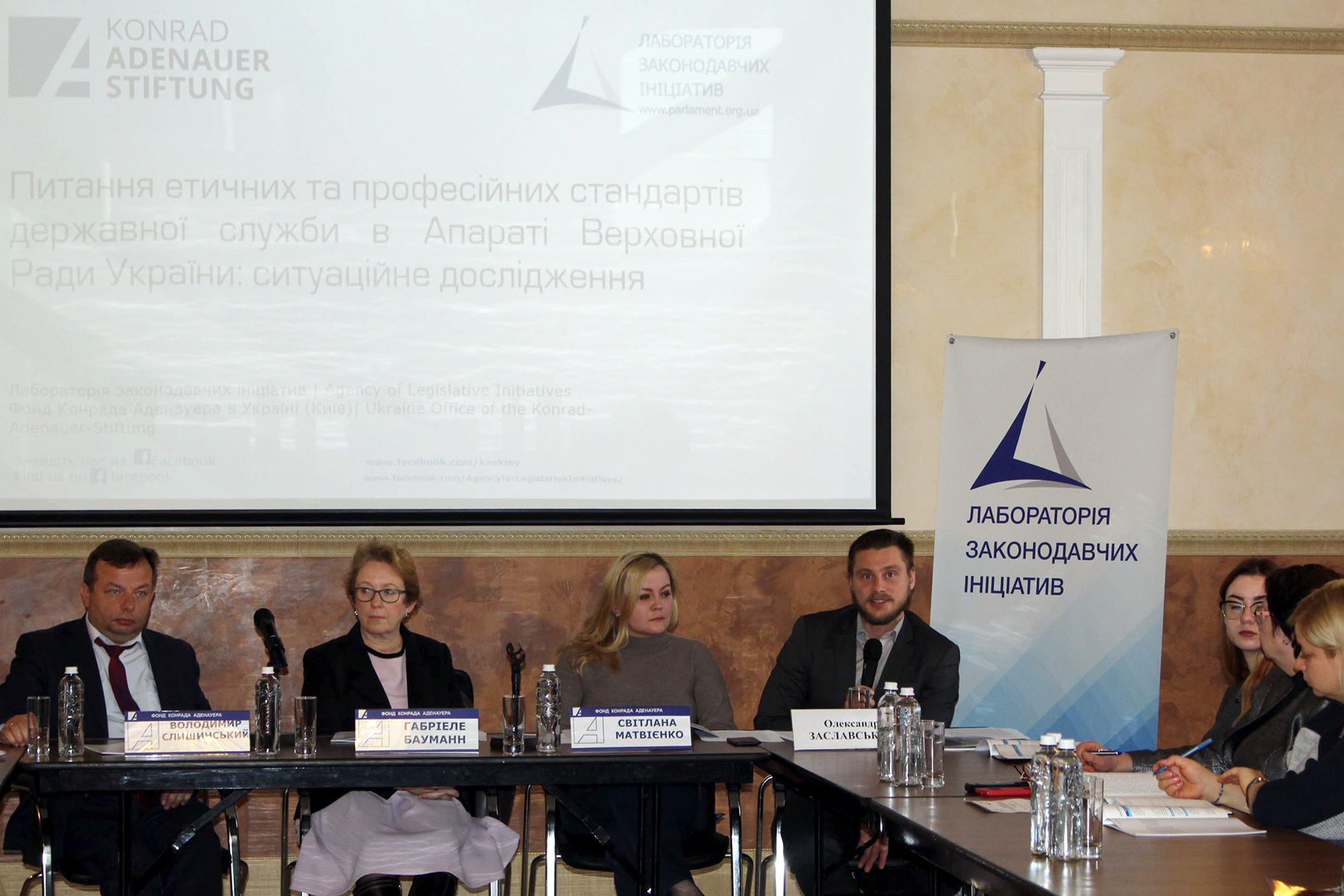 Oleksandr Zaslavskyi, the Deputy Chairman of the Council of the Laboratory of Legislative Initiatives, moved towards the more detailed presentation of the study. In order to explain Mr. Olexander’s messages clearly, we have prepared a concise list of the main Apparatus’ challenges alongside with the ways to overcome them:

Problem
– The limited authority and the lack of guarantees that all normative acts adopted by the Verkhovna Rada would correspond to the primacy of the rule of law.
Recommendation
– To make the Apparatus servants remain in their national service. Consequently, they must be so professional and responsible not only for the law expertise; instead, they should also be responsible for the final version of any bill. It can be made by consolidating the authority of the Office to refuse the registration of bills and stop the passage of certain bills;
– To develop and approve the Resolution of the Verkhovna Rada, which clearly identifies the reasons for refusal to register any law and stop the passage of bills through parliament.

Problem
– The uncertainty of the basic concepts and rules that define the behavior of the Apparatus’ civil servants hinder the conflict situations’ resolution and also impedes the development of their professional identity and ethics.
Recommendation
– To draw a clear line between concepts of a) public good and b) state interest at the official level, approve official manual on the role, mission and standards of all Apparatus’ servants remain in their national service. Consequently, they must be so professional and servants;
– To develop and approve the Code of Ethics which is, in particular, devoted to employees’ communication rules and behavioral ethics.

Problem
– The inconsistency of actions between the Apparatus servants remains in their national service. Consequently, they must be so professional and, the VRU, the CMU, and Ukrainian President impedes work processes and limits the capability of the Apparatus, which also reduces the influence of employees.
Recommendation
– To correlate regulations of the VRU and the CMU;
– To create a special department for monitoring and evaluating the impact of state policy;
– To standardize the mechanism of intra-parliamentary communications and review budget planning mechanism of the Verkhovna Rada.

Problem
– The lack of public reports on the results of the work of the parliament under the need for transparency and openness of the parliament; the mechanism of making public reports is not fixed at the legislative level clearly.
Recommendation
– To enshrine the necessity of submitting public reports by Apparatus’ chiefs in the VRU’s regulations and the Law “On Civil Service”;
– To appoint responsible persons for reporting and delegate them relevant authorities as well as to provide them with all needed financial and human resources.

Problem;
– Staff development is hampered by the outdated recruiting style and low attention to employees’ skills development. Moreover, the procedure for approval of the Chairman’s candidacy is still not specified.
Recommendation
– Adopt the strategy of the Apparatus servants’ development, which includes the professional development of employees;
– To involve external experts in conducting tenders for filling vacancies, to optimize the site and to ensure the continuity of the recruiting process;
– Determine the deadlines for the election, presentation, and approval of the Apparatus Chairman’s candidature and implement consultative contests for his positions.

Read more about the problems mentioned by Mr. Zaslavskyi in the full text of the study. It is important that apart from the key challenges of the Apparatus, Alexander also mentioned the main achievements of this organization, for example, increased transparency, improved culture of providing feedback to citizens and reporting, a stable influx and outflow of personnel.

After the study presentation, an active discussion with the participation of all parties started, which demonstrated that the system of the Apparatus of the Verkhovna Rada of Ukraine is going to reach a new level of quality and consciousness.