On December 2-4, 2018, a training session for the representatives of various political parties was held within the framework of Party Innovation Hub – Women –  a platform for spreading knowledge about the use of modern technologies and innovations for the development of political parties and party democracy in Ukraine. 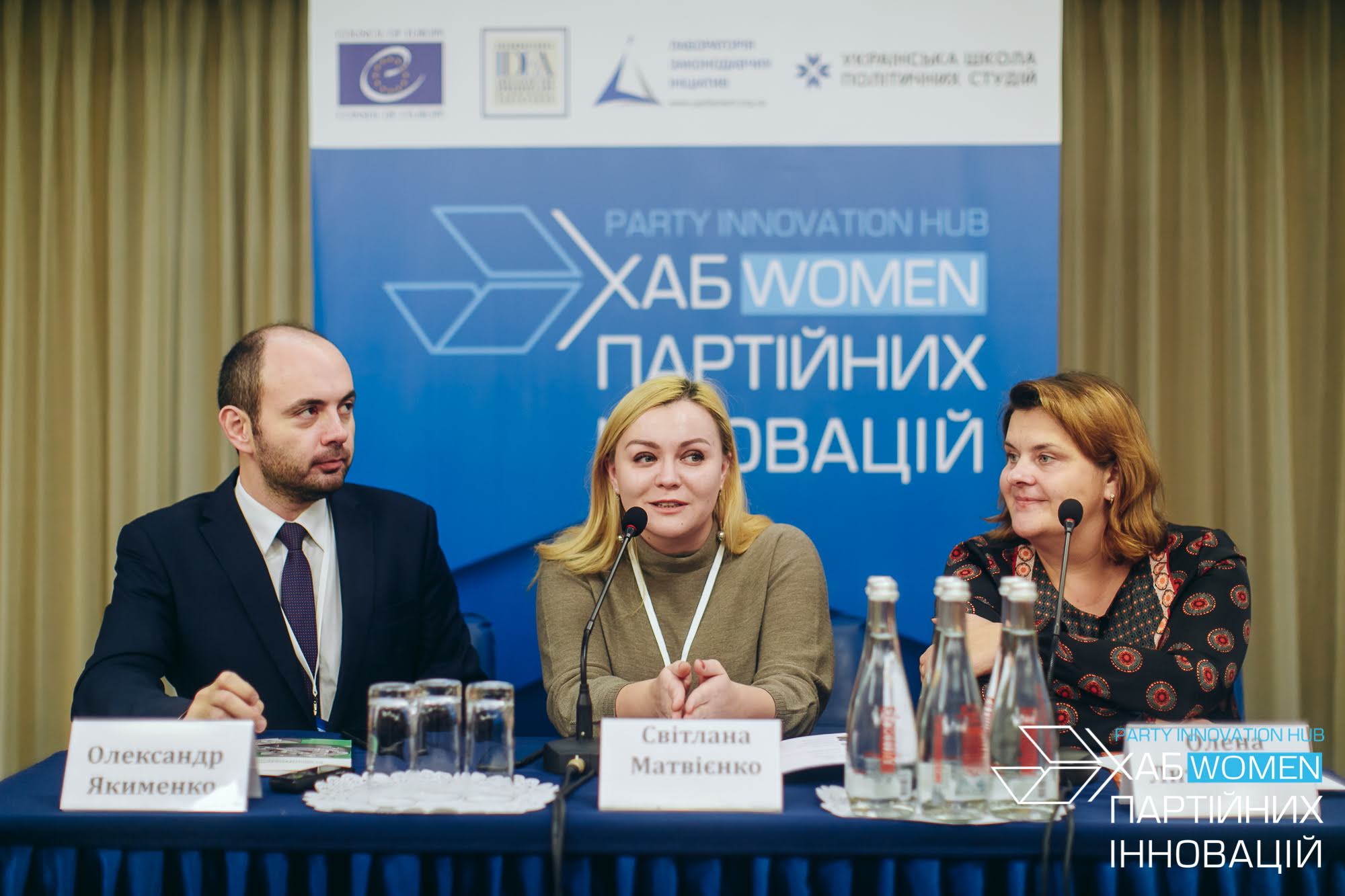 Olena Lytvynenko, Deputy Head of the Council of Europe Office in Ukraine, stressed that gender equality is one of the priorities of the Council of Europe, since equal participation of men and women in public and political life and in decision-making is an integral part of human rights. It is also a matter of social justice and a guarantee of sustainable democratic governance.

Svitlana Matviinko, Chairwoman of the Board, Agency for Legislative Initiatives, drew attention to the importance of the fact that the Party Innovation Hub – Women united representatives of a large number of different political parties and movements, which makes it possible to talk about the formation of a new political culture and inter-party dialogue. “The culture of democratic participation, intraparty communication, and democratic processes – this alone can raise us to a new level of political responsibility,” Svitlana said.

Oleksandr Iakymenko, Program Coordinator for Ukraine, International IDEA, said that the project was aimed at overcoming the crisis of representation – the gap between voters’ needs and how their elected representatives react to their inquiries. And this is a problem of connectionі and communication with voters. New technologies not only reduce the cost of election campaigns, but also help to build democracy. 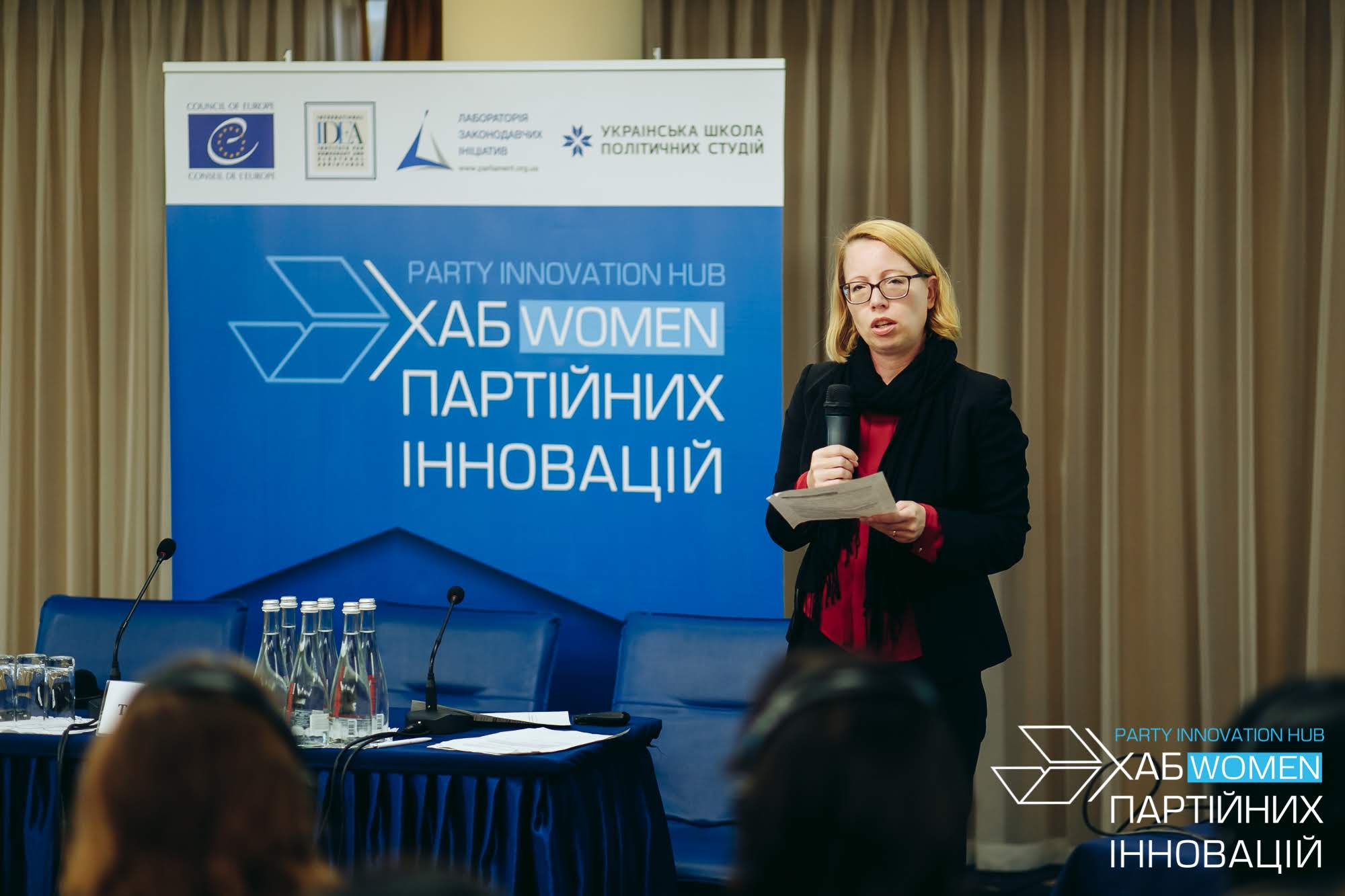 Katja Tilikainen, Gender Adviser, Council of Europe Office in Ukraine, emphasized that the achievement of balanced participation of women and men in the process of political and social decision-making is crucial for the good functioning of society.

Katia Tilikainen told participants of Party Innovation Hub – Women about the strategy of the Council of Europe on gender equality, Council of Europe recommendations on balanced participation of women and men in decision-making, equal access to funding, overcoming prejudice, sexism and stereotypes, youth involvement in political life, use of new technologies. Gender budgeting is the integration of a clear gender perspective into the overall context of the budget process through the special processes and analytical tools to promote gender-based policies.

Natalya Fedorovych, Deputy Minister of Social Policy of Ukraine, and Oksana Kyselyova, National Expert, GRB project, told participants of Party Innovation Hub – Women about what gender budgeting is, what opportunities it opens and in which regions of Ukraine it is implemented. 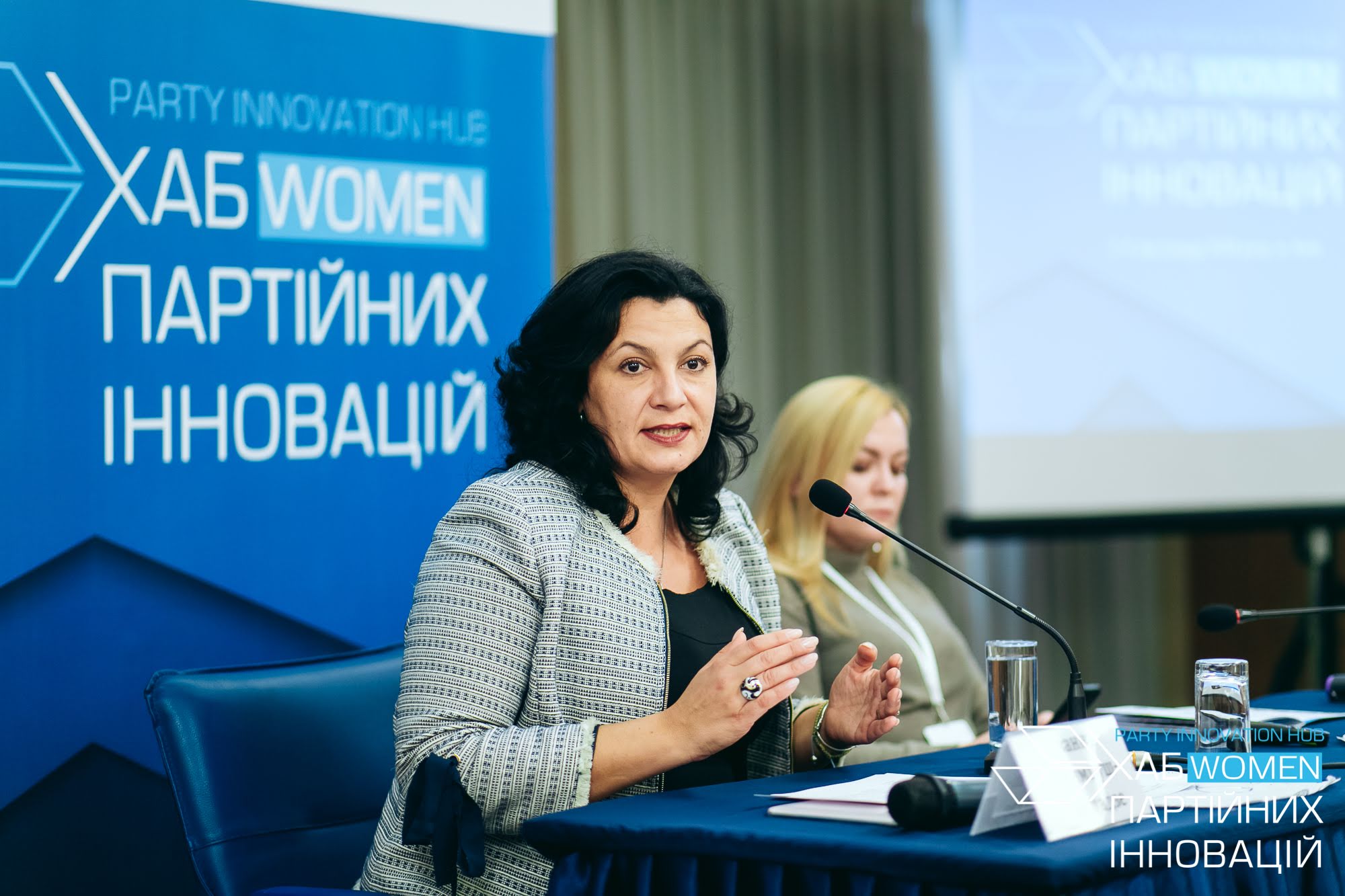 Ivanna Klympush-Tsintsadze, Vice-Prime-Minister for European and Euroatlantic Integration of Ukraine, while talking to participants of Party Innovation Hub – Women about gender issues in state administration, she stressed that equal representation of men and women makes it possible to come to a better quality of decision-making. 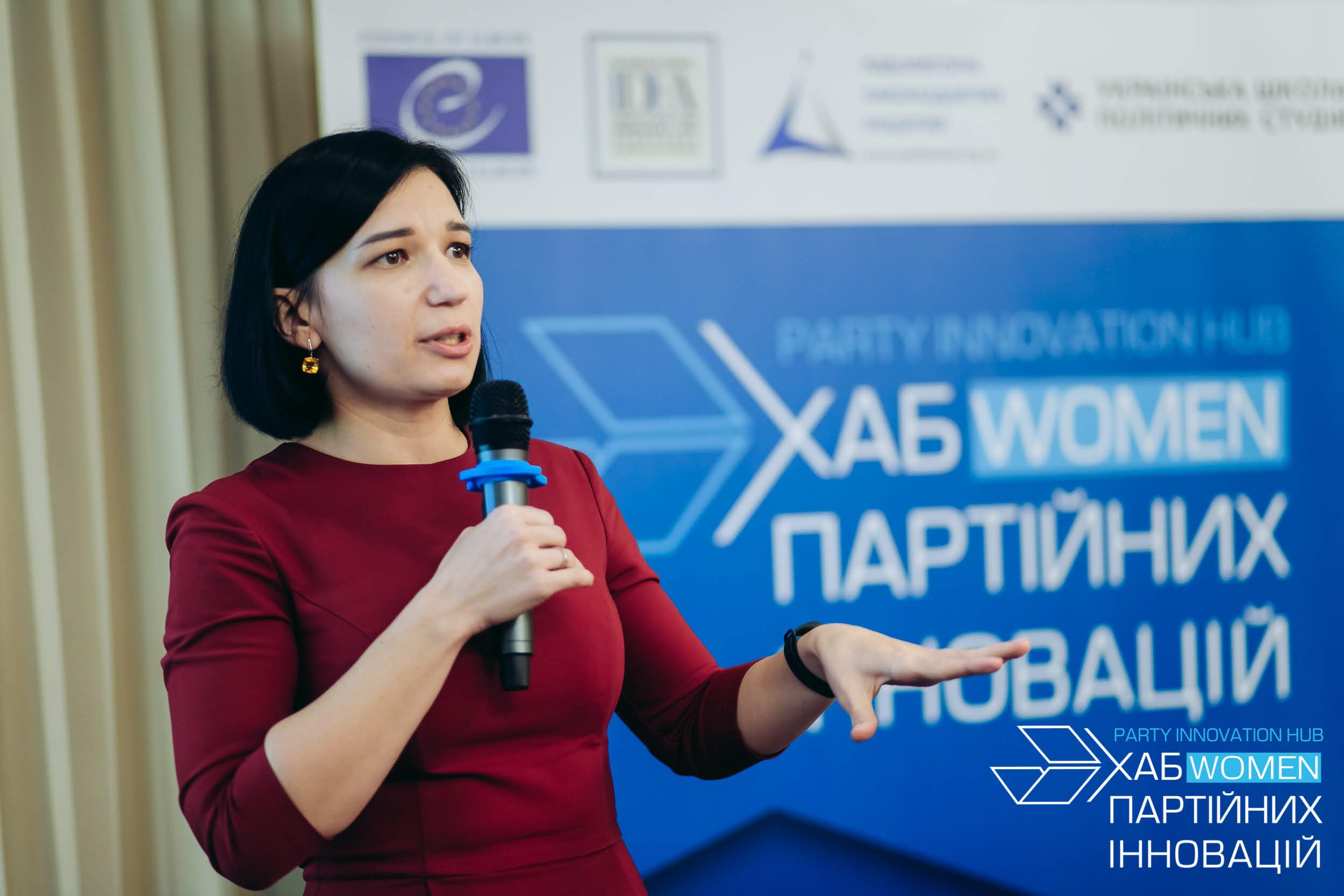 Olga Aivazovska, Head of the Board, Coordinator of Electoral and Political Programmes of the Civil Network OPORA,  discussed with participants of Party Innovation Hub – Women a number of issues related to elections, in particular, what are the basic standards and principles of electoral law; what do we mean when we talk about equal suffrage; what does the principle of free elections embody; why is it important to follow the principle of the secret ballot; how can we ensure the principle of respect for fundamental human rights and freedoms.

Gender equality in political parties: why it matters for citizens and for parties 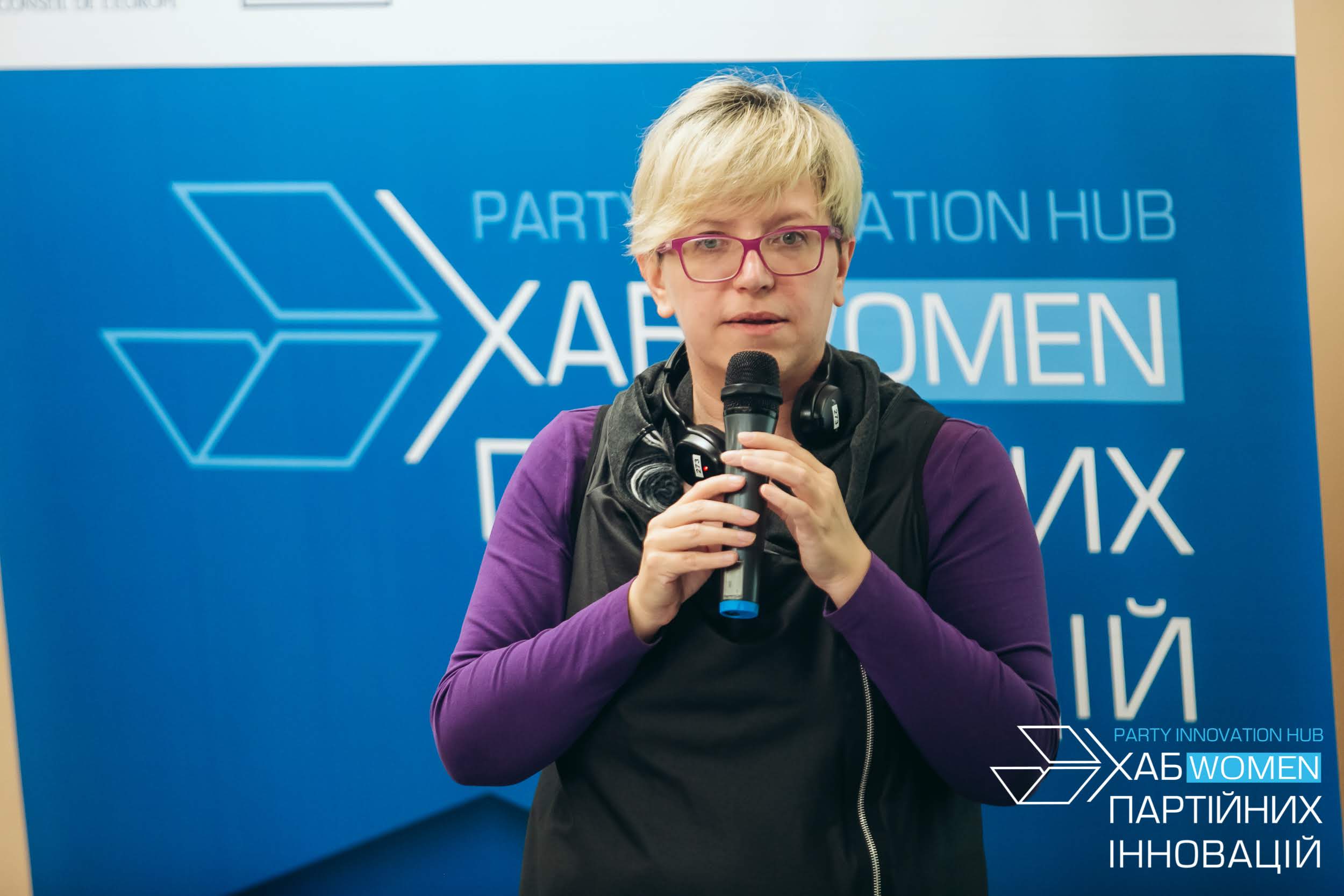 Karolina Leakovic, Coordinator of the Department of Human Rights Policy in the Social Democratic Party of Croatia, together with participants of Party Innovation Hub – Women discussed the challenges facing modern democracy; how to ensure gender equality in political parties; what are the main types of political participation of women; why there should be more women in elected bodies; how does the presence of women affects parliamentarians; what challenges does gender equality face. 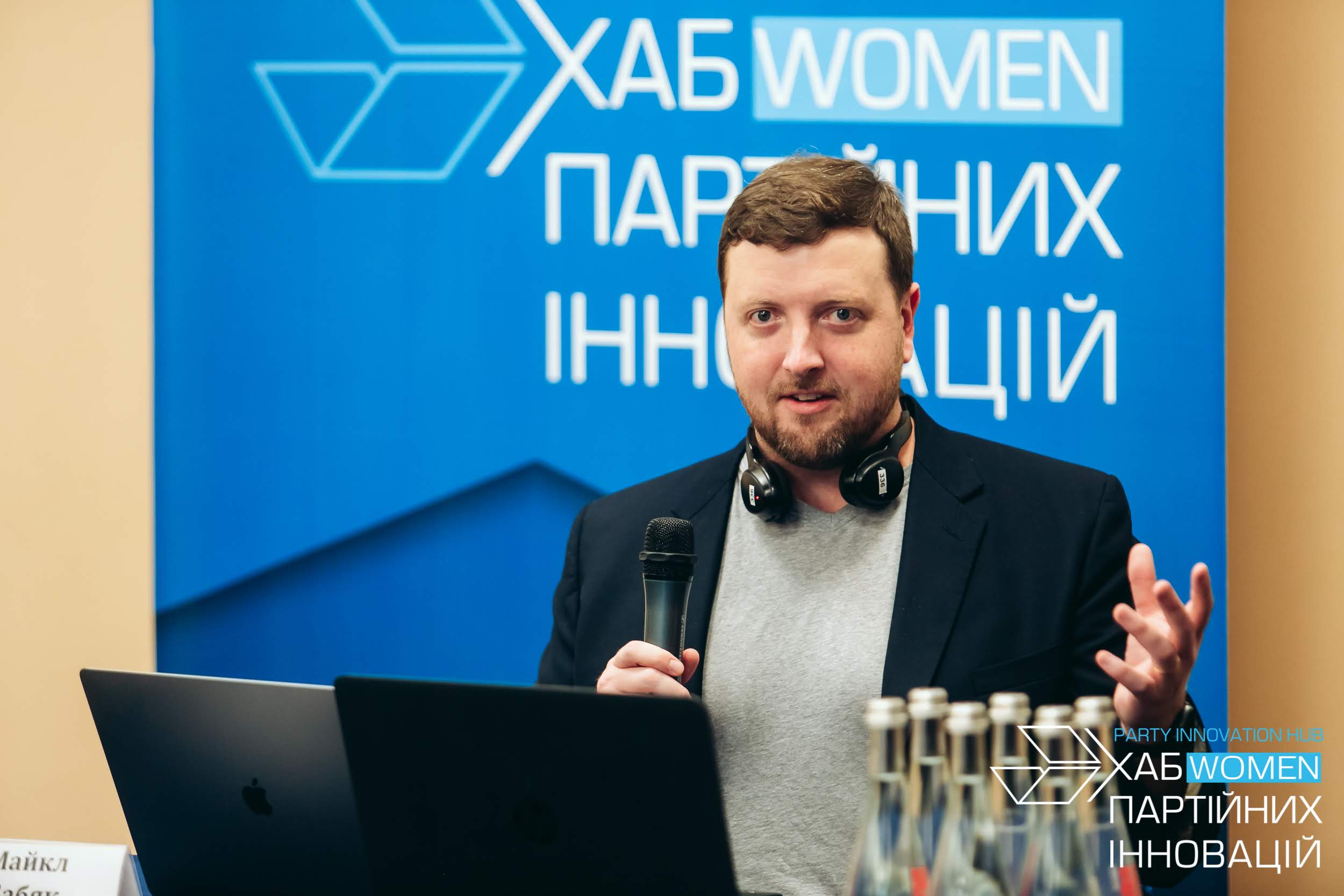 Michael Babyak, Dome Inc., Former Director of Marketing Technology at Republic National Committee, told participants of Party Innovation Hub – Women, how did the Trump’s campaign start; why did it achieve such a great success; why the Republican Party has invested in digital; how to organize and conduct an extremely effective fundraising campaign; how to involve volunteers in your campaign; what is the positive impact of digital technology on the work of political parties.

Digital strategy for politicians: what you can learn from brands 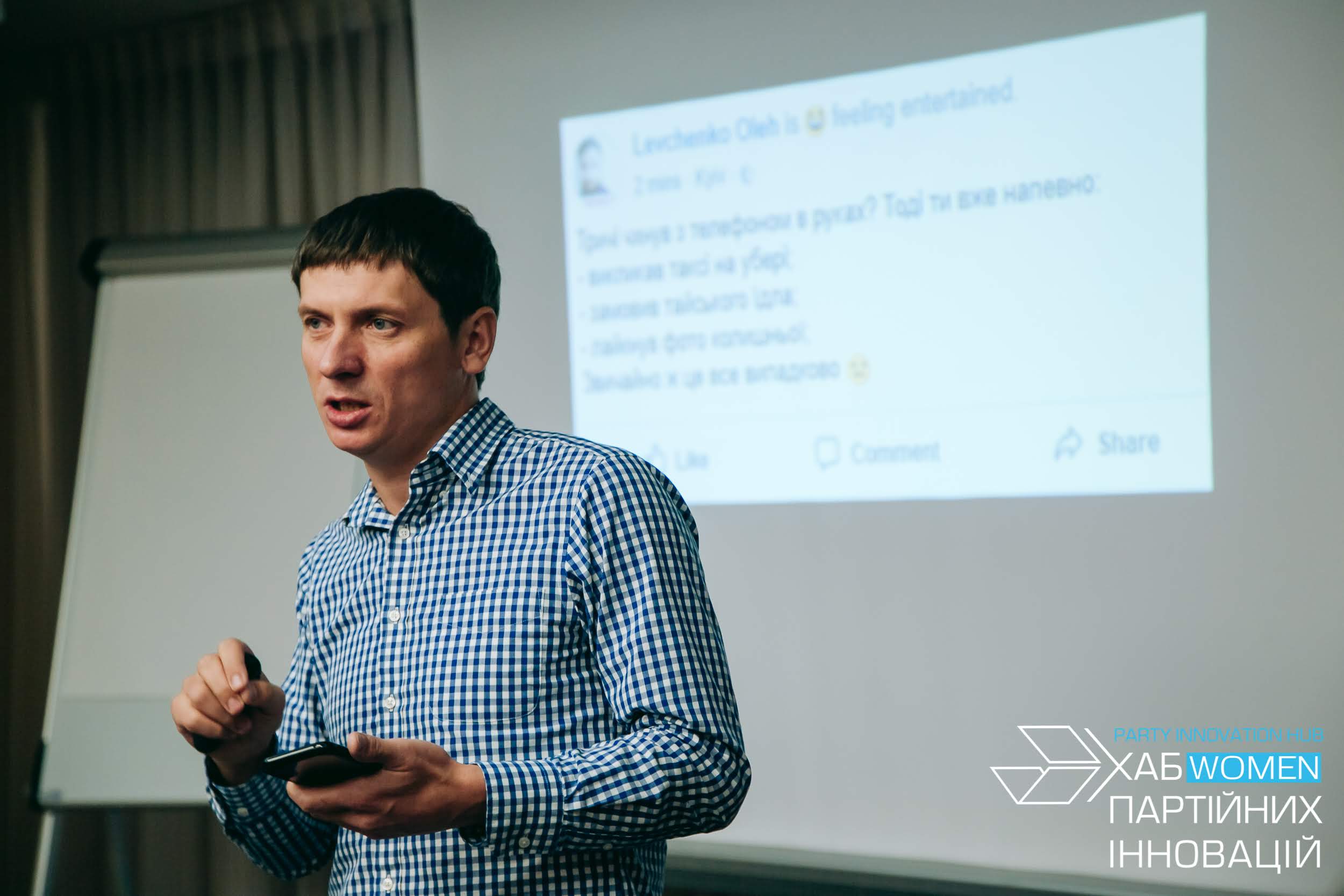 74% of Ukrainians have access to the Internet, 35% of Ukrainians spend their free time in social networks Yaroslav Vedmid, CEO and Founder, Digital Agency Postmen, told participants of Party Innovation Hub – Women, what content is most popular, and how to adapt your content to the audience’s interests, how much time Ukrainians spend online, how to analyze the impact of your messages on your audience, how to use bots, how to work with algorithms and big data, and what is artificial intelligence today. 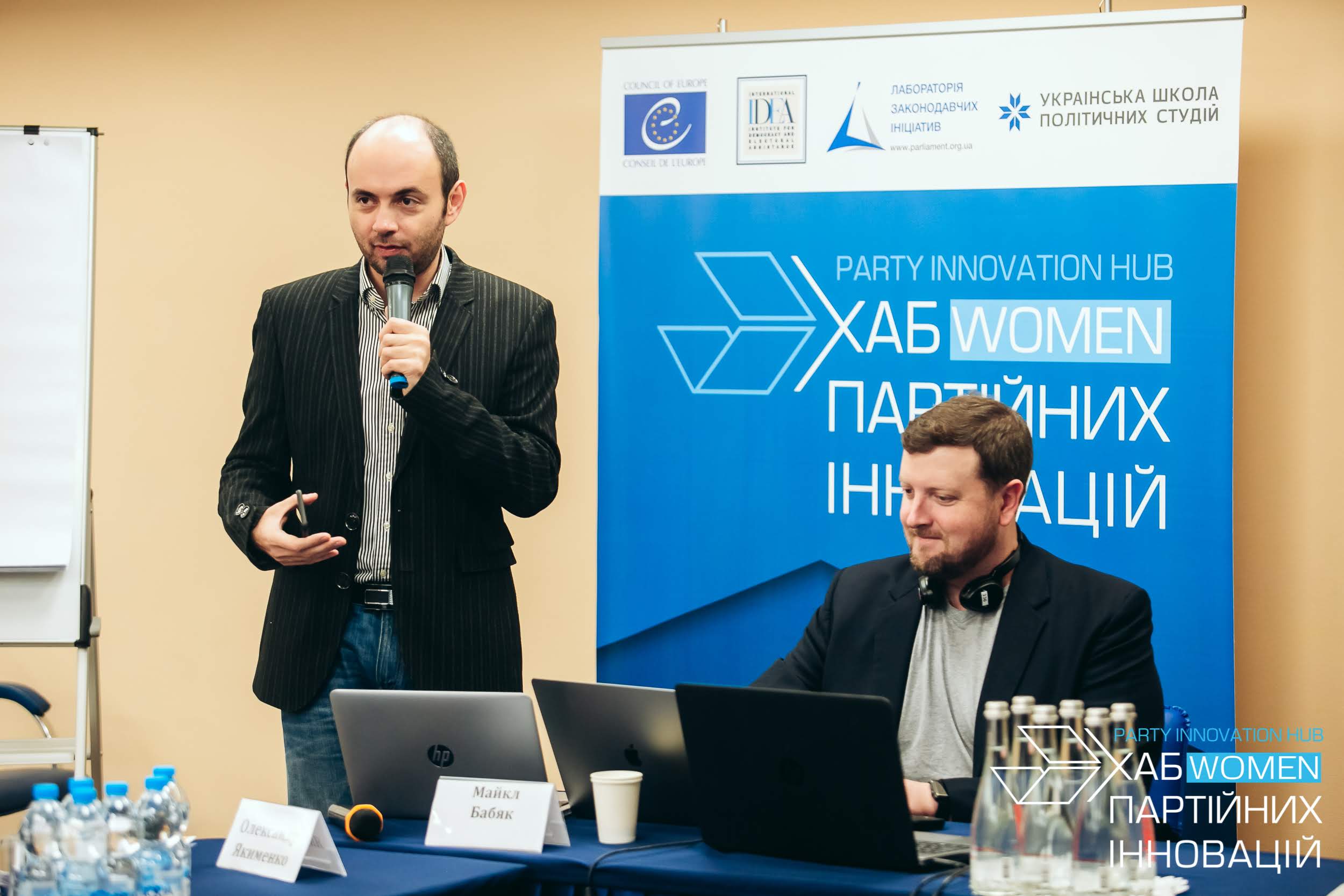 Oleksandr Iakymenko, Program Coordinator for Ukraine, International IDEA, told Party Innovation Hub participants about the rapid prototyping, its advantages, and how political parties can use it.

Michael Babyak and Oleksandr Iakymenko estimated how creative, realistic and useful for party building were the ideas of participants who tested the technique of rapid prototyping. What can we learn from Estonia’s example of promoting e-services on the state level? What are the successful examples of the use of digital technologies by Ukrainian politicians? How can political parties use digital technologies to engage their supporters in active cooperation? – Yaroslav Vedmid, CEO and Founder, Digital Agency Postmen, told participants of Party Innovation Hub – Women. 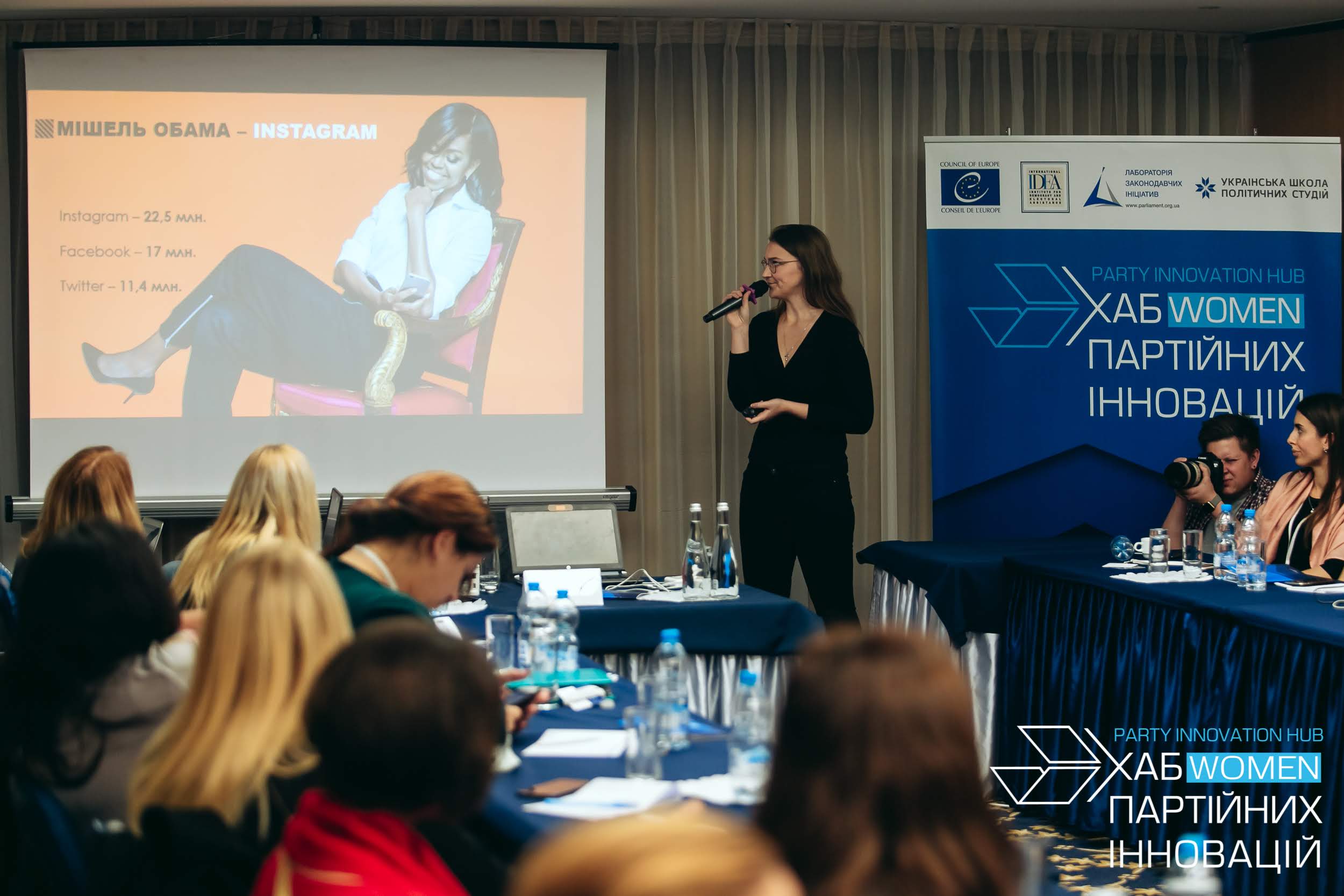 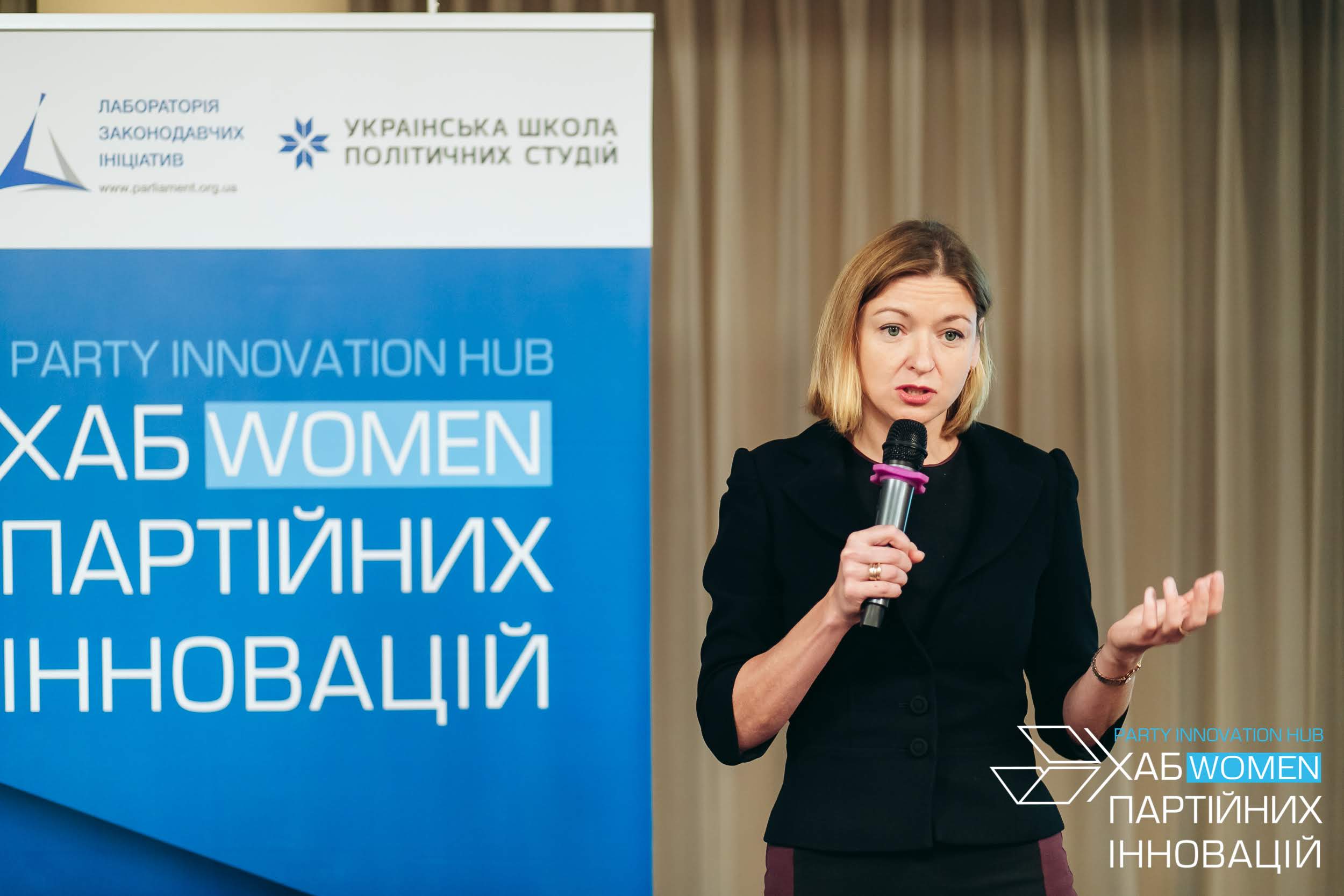 State of the Future, or how to outrun the whole world 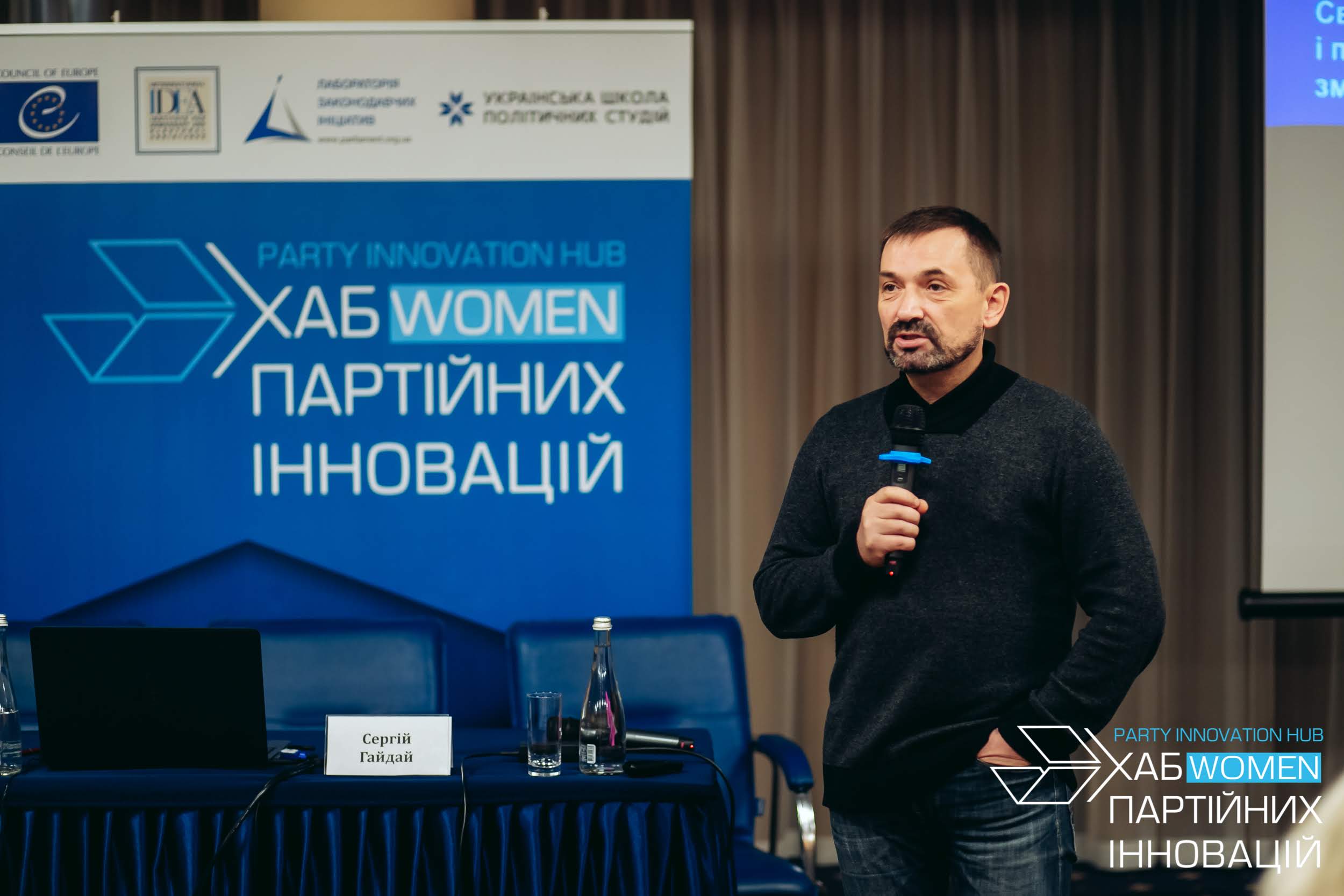 State mechanisms are outdated all over the world. The world has technologically exceeded all the traditional political systems of representative democracy. Now, any person on the planet has no need in the bulky state structures, or the multimillion army of officials. Now it is possible to own a remote control of the State Service of the People in your smartphone. What services should be provided instead the variety of state functions? What will Ukraine look in future? – Sergiy Gaiday, Director for strategic planning, social engineering agency Gaiday.com, discussed these issues with participants of Party Innovation Hub – Women.

«Vasha Dumka» and other digital instruments for parties 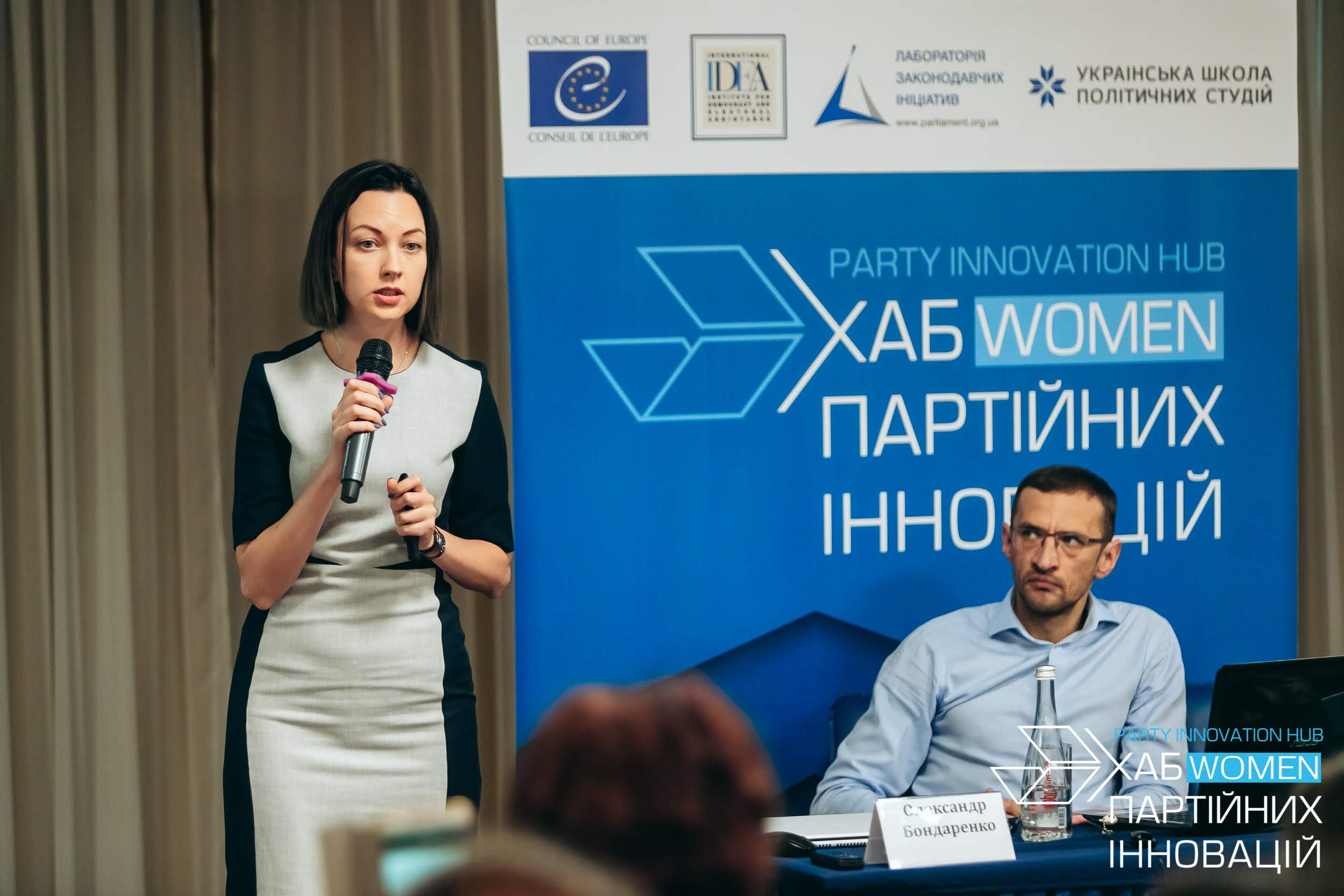 How many people in Ukraine use the Internet? What is a “Generation of Titles”? What are the most visited sites in Ukraine? How do the facebook posts rank? What are the rules of behavior for politicians on social media? How political parties should communicate in Instagram? What Ukrainian politicians are looking for on the Internet? – Oleksandr Bondarenko, Head of Special Projects, Digital Communications Agency “Reputation Management Agency”, told participants of Party Innovation Hub – Women. 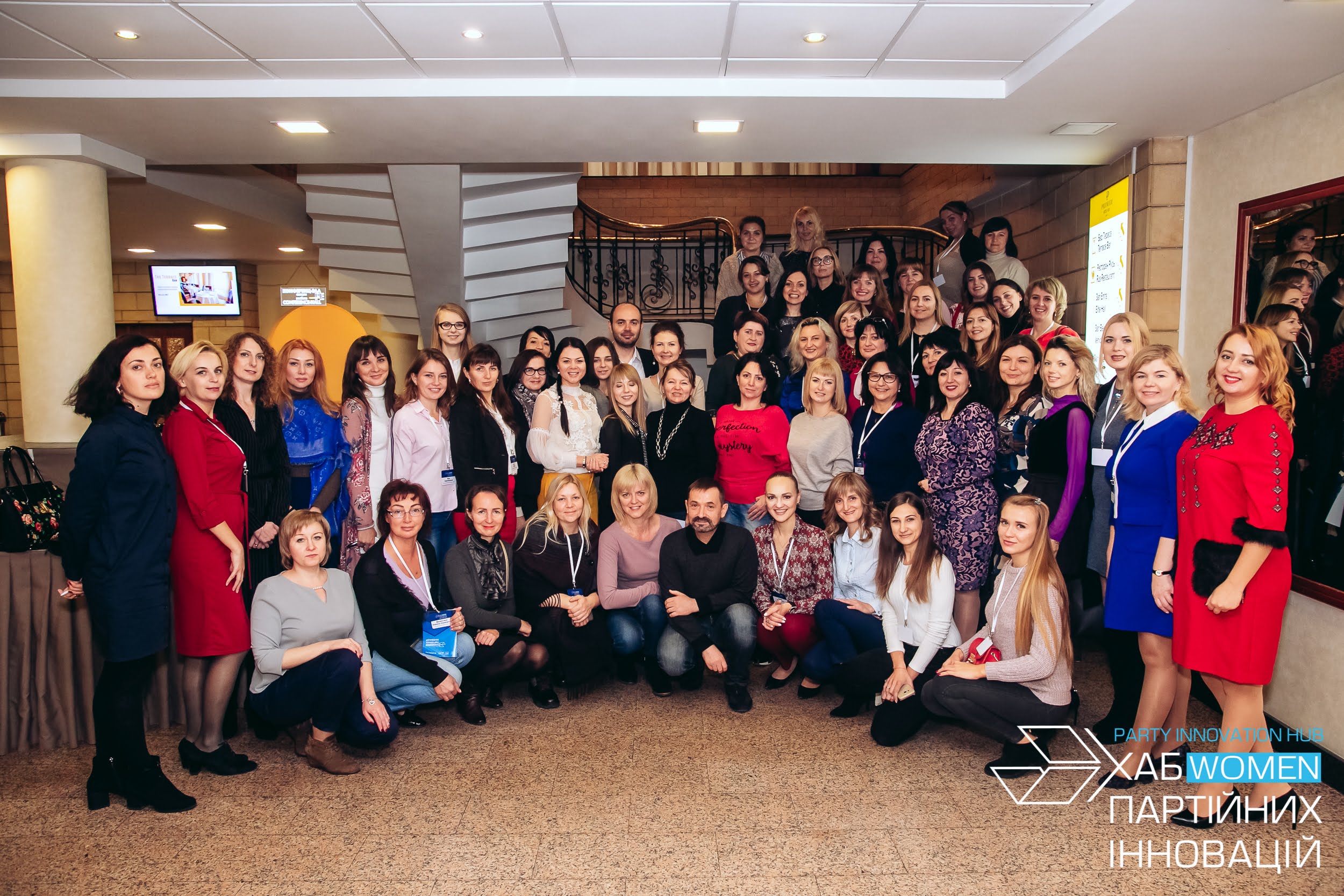