On October 19-21, 2018, a training session for the representatives of various political parties was held within the framework of Party Innovation Hub – a platform for spreading knowledge about the use of modern technologies and innovations for the development of political parties and party democracy in Ukraine.

Party Innovations Hub is an initiative of International IDEA and Ukrainian school of political studies, Agency for Legislative Initiatives’ project.

Opening of the new program of Party Innovation Hub Oleksandr Iakymenko, Program Coordinator for Ukraine, International IDEA, told about the importance of Party Innovation Hub, which is the answer to the challenges of global processes, in particular, the crisis of representation – the gap between voters’ needs and their elected representatives’ activity. Oleksandr stressed that, on the one hand, voters should better communicate their needs and aspirations; however, on the other hand, political parties should better listen to their voters and respond to their expectations. Party Innovation Hub is focused on the innovative communication and work technologies, both with voters and within the political parties.

Svitlana Matviienko, Chairwoman of the Board, Agency for Legislative Initiatives, told about the necessity and importance of political education, stimulation of women’s participation in political process, and the development of an effective communication model. Svitlana drew attention to the fact that party digitalization helps to build intraparty democracy, transparency and accountability of parties. It also helps in democratic consolidation. 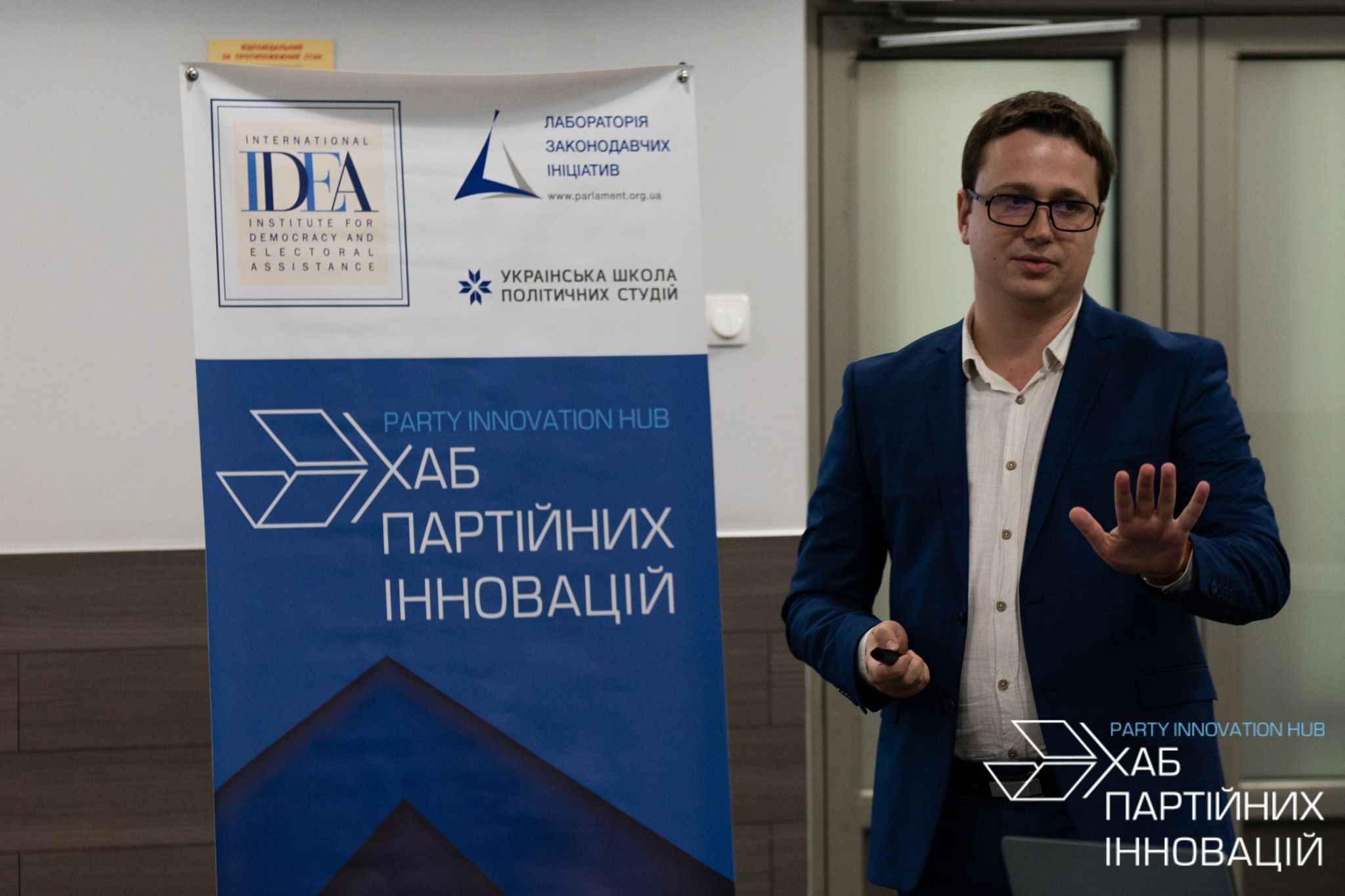 Yevhen Barshchevskyi, Coordinator of Public Consulation Program at National Democratic Institute, told the participants of the Party Innovation Hub about the system of conducting public consultations “Your Opinion” (“Vasha dumka”), which gives political parties, and NGO networks the opportunity to deliver information and receive responses via online SMS-voting or voting on the site; as well as the resource “CiviCRM”  – a system for monitoring relationships and interaction both within the party and in communication with voters.

Public monitoring as an instrument of competitive advantage in the elections 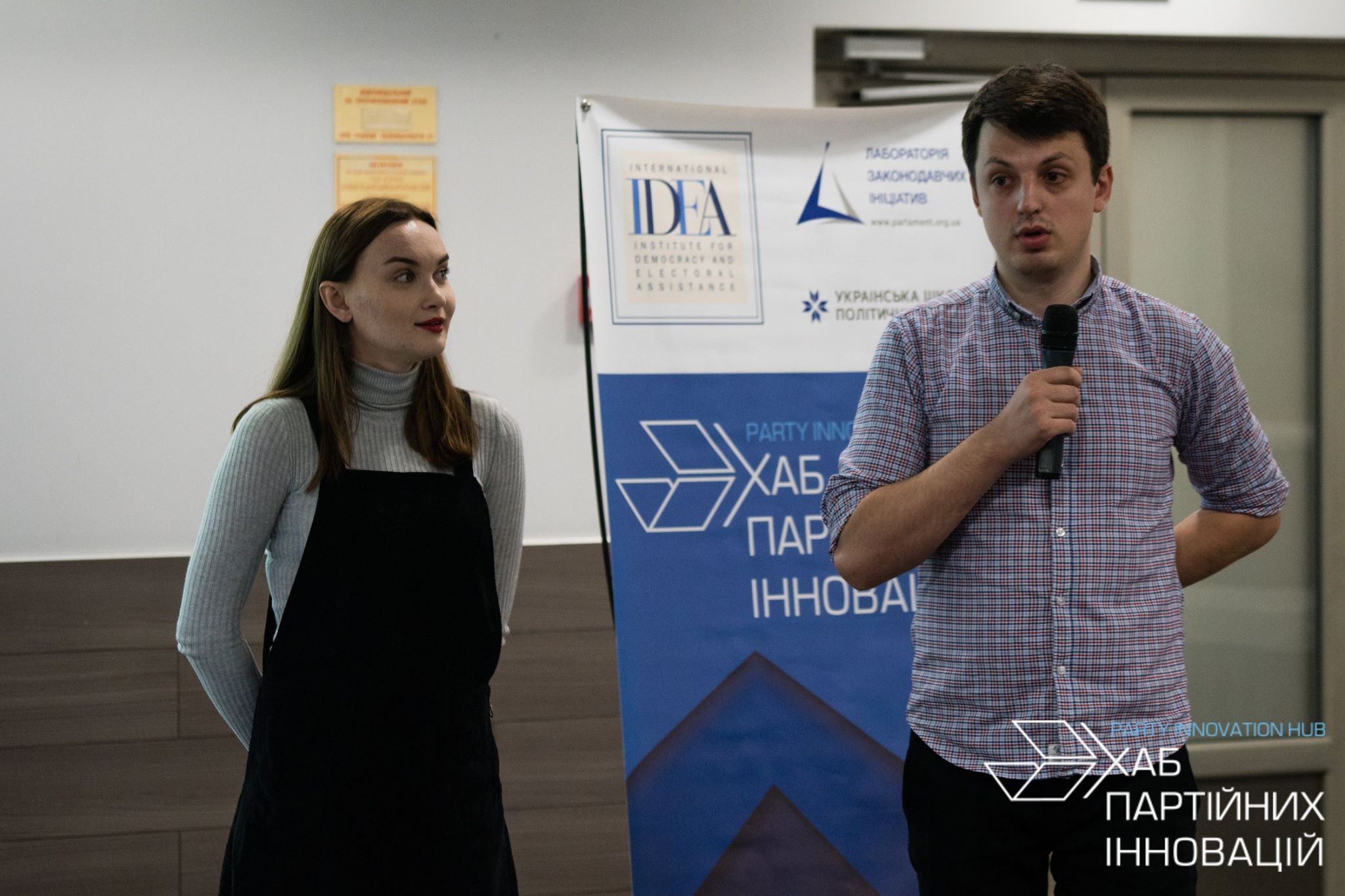 Yulia Reshitko, Communications Manager of CHESNO Movement, and Igor Feshchenko, Analyst on political finances of CHESNO Movement, presented Party Innovation Hub participants the tools that help political parties gain competitive advantage in the political debates. For example, PolitHUB is the base of politicians and parties that have at least once participated in national or local elections since 1998. The resources gathered data from the Central Election Commission, Verkhovna Rada of Ukraine, local councils, party websites, National Agency for Prevention of Corruption, party archives and media archives. Yaroslav Yurchyshyn, Chief Executive Officer at Transparency International Ukraine, discussed the openness of political parties with the participants of the Party Innovation Hub.

Digitalization of electoral campaigns in Ukraine Oleg Medvedev, political consultant, discussed with the participants of the training the ratings, organizational capacities of political parties, and probable political strategies before the elections. How did the Republican Party use digital? What is the basis of a successful fundraising campaign? How to involve volunteers in your campaign? How can video help in this process? What is the positive impact of digital technology on the work of political parties? 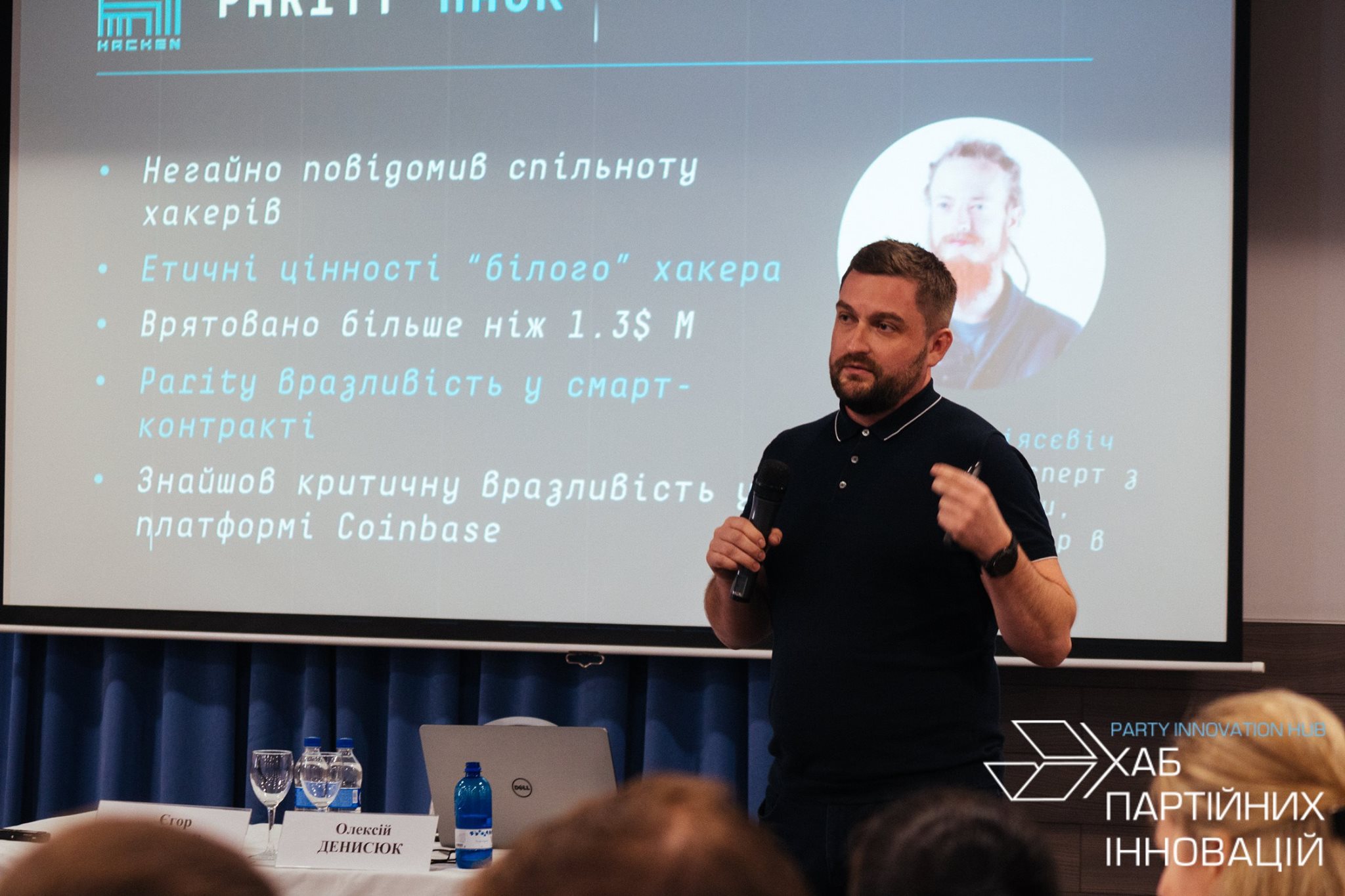 Yegor Aushev, Co-Founder, Hacken, and Oleksiy Denysyuk, Cyber security consultant, Hacken told the Party Innovation Hub participants, what is cyber security; who are such “white hat” hackers and whether they can protect your system from the “black hat” hackers violations; what are the cyber threats of the modern world; how the Internet users’ information is collected, and how can we protect ourselves from this. 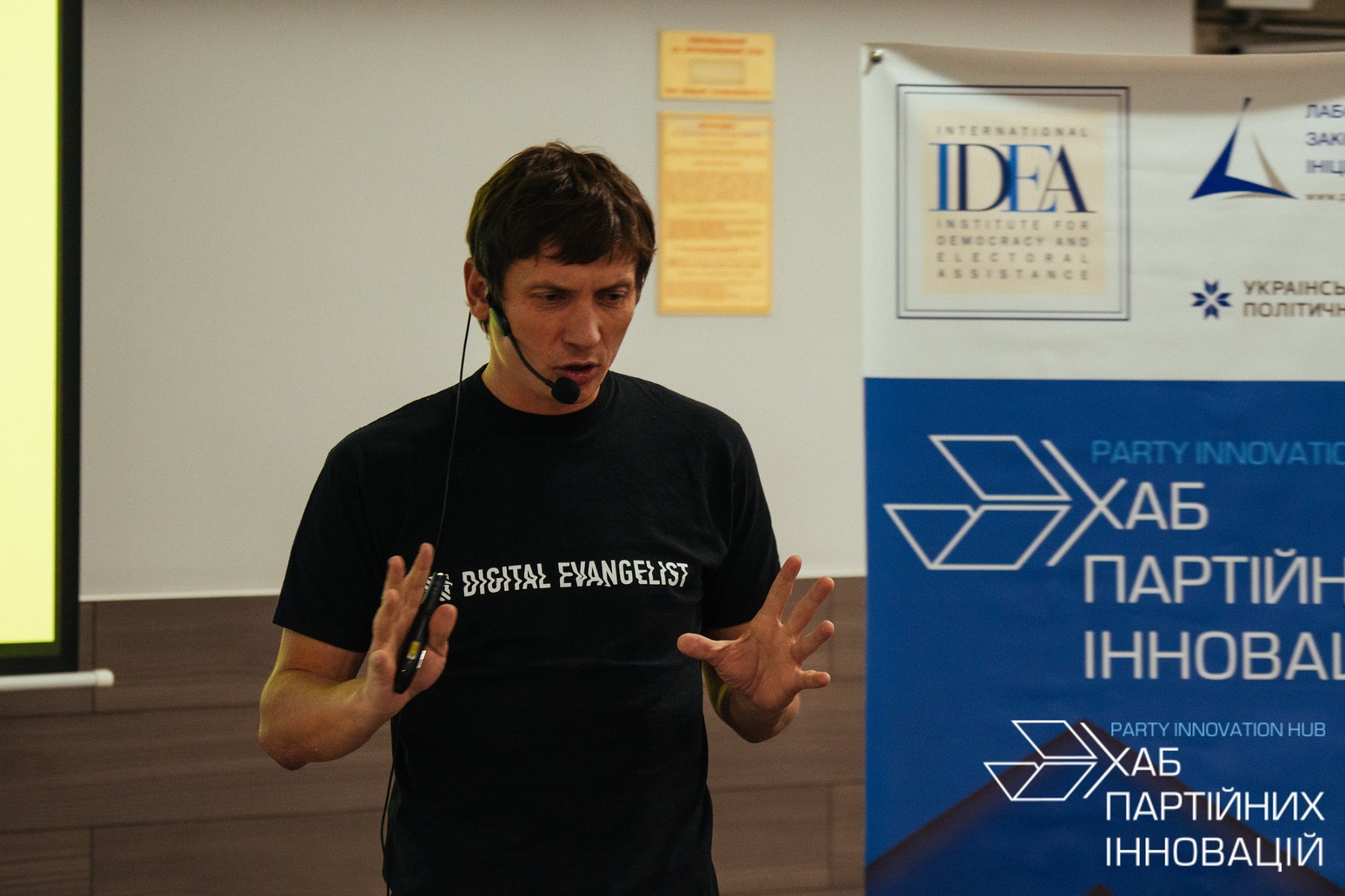 Yaroslav Vedmid, CEO and Co-Founder Postmen, told Party Innovation Hub participants how many Ukrainians are online today; how much time they spend there, and what they do online; what content is most appreciated, and how to adapt your content to the audience’s interests; why in social media fakes are much more popular than facts; how to analyze the impact of your content on the audience; what is artificial intelligence today.

Effective party communication: dialogue with society in the Internet era 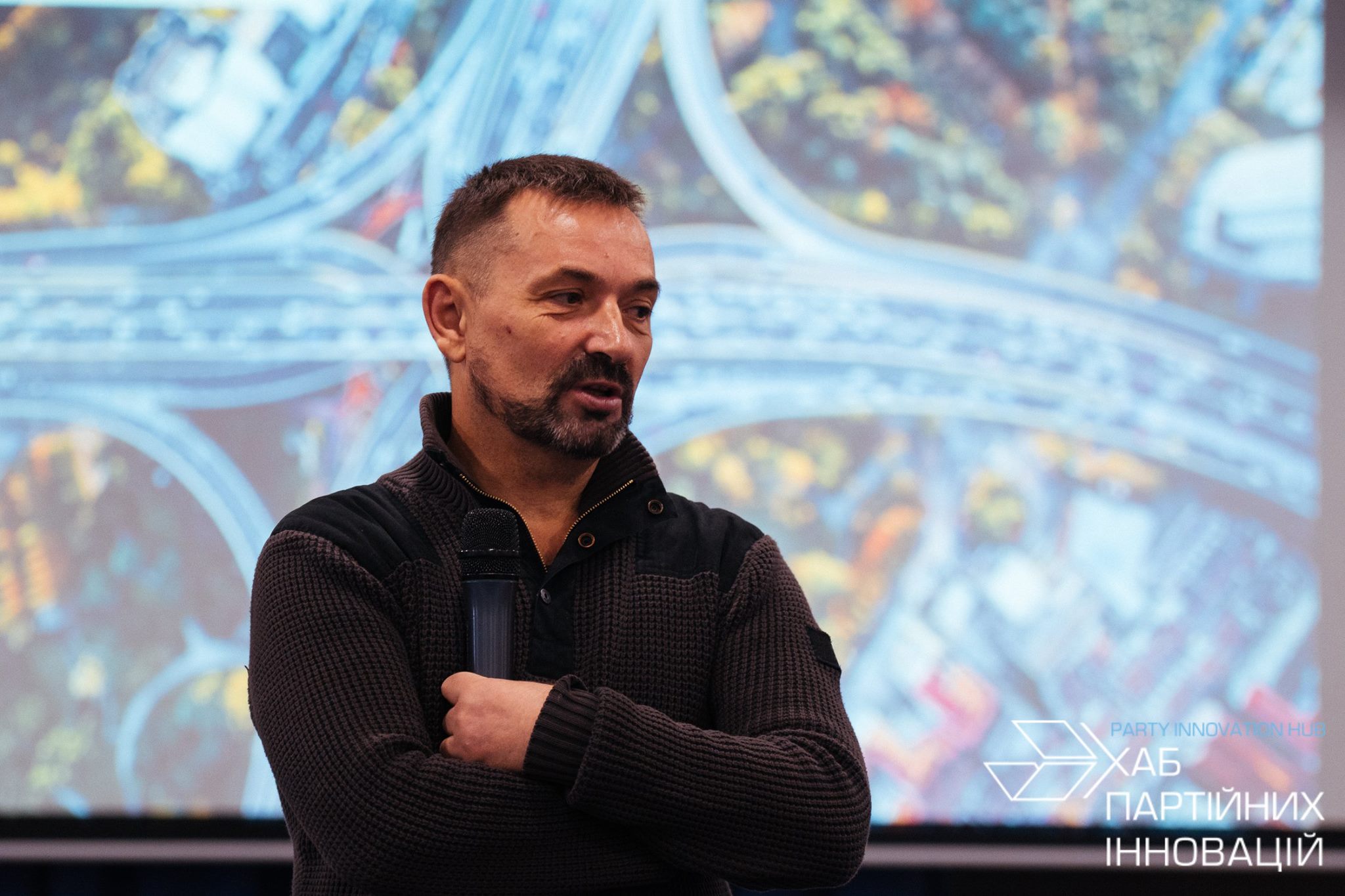 State mechanisms are outdated all over the world. The world has technologically exceeded all the traditional political systems of representative democracy. Now, any person on the planet has no need in parliaments, or in various kinds of deputies and other authorities – the bulky state structures, or the multimillion army of officials. Now it is possible to own a remote control of the State Service of the People in your smartphone. What services should be provided instead the variety of state functions? What will Ukraine look in future? – Sergiy Gaiday, Director of Strategical Planning of Social Engineering Agency “Gaiday.com”, discussed these issues with Party Innovation Hub participants. 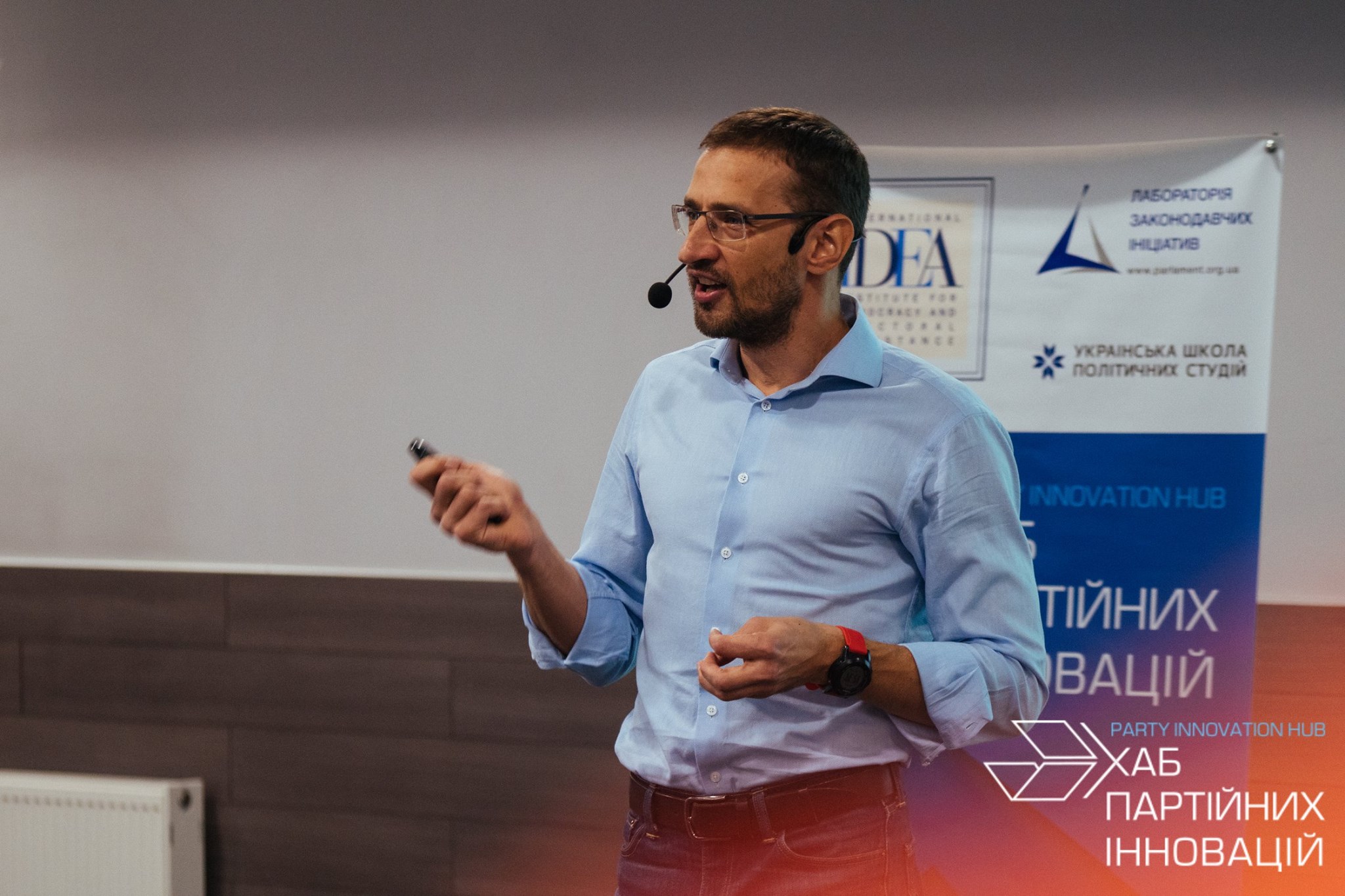 Oleksandr Bondarenko, Head of Special Projects at Digital Communications Agency “Reputation Management Agency” told Party Innovation Hub participants about the general trends in social media; about what kind of content is most popular; how Ukrainians read news in social networks; which sites are the most visited; which social media and messengers are most popular among Ukrainians; what are the secrets of creating successful content; how to use big data.