Preparation of the alternative reports (Shadow Reports) is a part of the Agency for Legislative Initiative project in terms of USAID RADA Program: Responsible, Accountable, Democratic Assembly, which aims at institutional support of the Verkhovna Rada. Due to the preparation of alternative reports on problematic issues in the reform of civil service and higher education, the implementation of the law on the opening of property registers, etc., the Agency managed to argue the position of NGOs on possible ways to settle these issues. In addition, one of the most important tasks of the project is to strengthen the control function of parliament and parliamentary committees. For this purpose, the accepted format of alternative reports from the international practice has been adapted to Ukrainian context as a tool for policy monitoring and evaluation.
In the context of these guidelines we consider alternate reports as expert analytical documents created by civil society organizations that propose a sound alternative approach to the state of implementation of government policy, assessment of its impact during implementation, review of existing approaches and finding ways to improve public policy. The main task of an alternative report is a reasoned demonstration of position that was developed and consolidated by expert civil society organizations on an important political issue. These reports are not only published in the open access, but are also presented at the meetings of specialized parliamentary committee in order to get civil society organizations’ point across MPs and other participants of the political process. Although reports may be submitted to any parliamentary committee meeting, they are especially in need during Government Annual Report review by relevant parliamentary committees.
Alternative reports of the Agency for Legislative Initiatives were prepared by profile civil society organizations or specially invited experts and were presented at the committee meetings with the participation of responsible representatives of government ministries. The popularization of such an instrument among parliamentary committees allows to introduce step-by-step an institution of policy monitoring and evaluation at the stage of decision-making, facilitates communication between committees and government (and / or ministries), and involvement of profile NGOs in policy development. 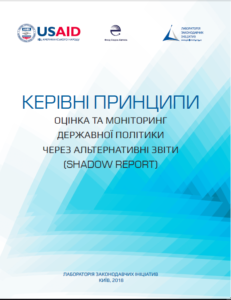 The preparation and presentation of analytical reports in the Shadow Report format is part of the project embodied by the Agency for Legislative Initiatives, supported by the USAID Rada Program: Responsible Accountable Democratic Assembly, implemented by the East Europe Foundation.

The third session of the Verkhovna Rada: What has changed in the work of the parliament?