On May 16, 2018 at the Committee meeting on State Building, Regional Policy and Local Self-Government the presentation of the Shadow Report “Civil Service and Public Administration Reform in Ukraine in 2017” was held.

The shadow report was presented by Tatiana Chernukha, Program Coordinator of the Agency for Legislative Initiatives. The study was prepared within the framework of the USAID RADA Program: Responsible, Accountable, Democratic Assembly implemented by the East Europe Foundation. 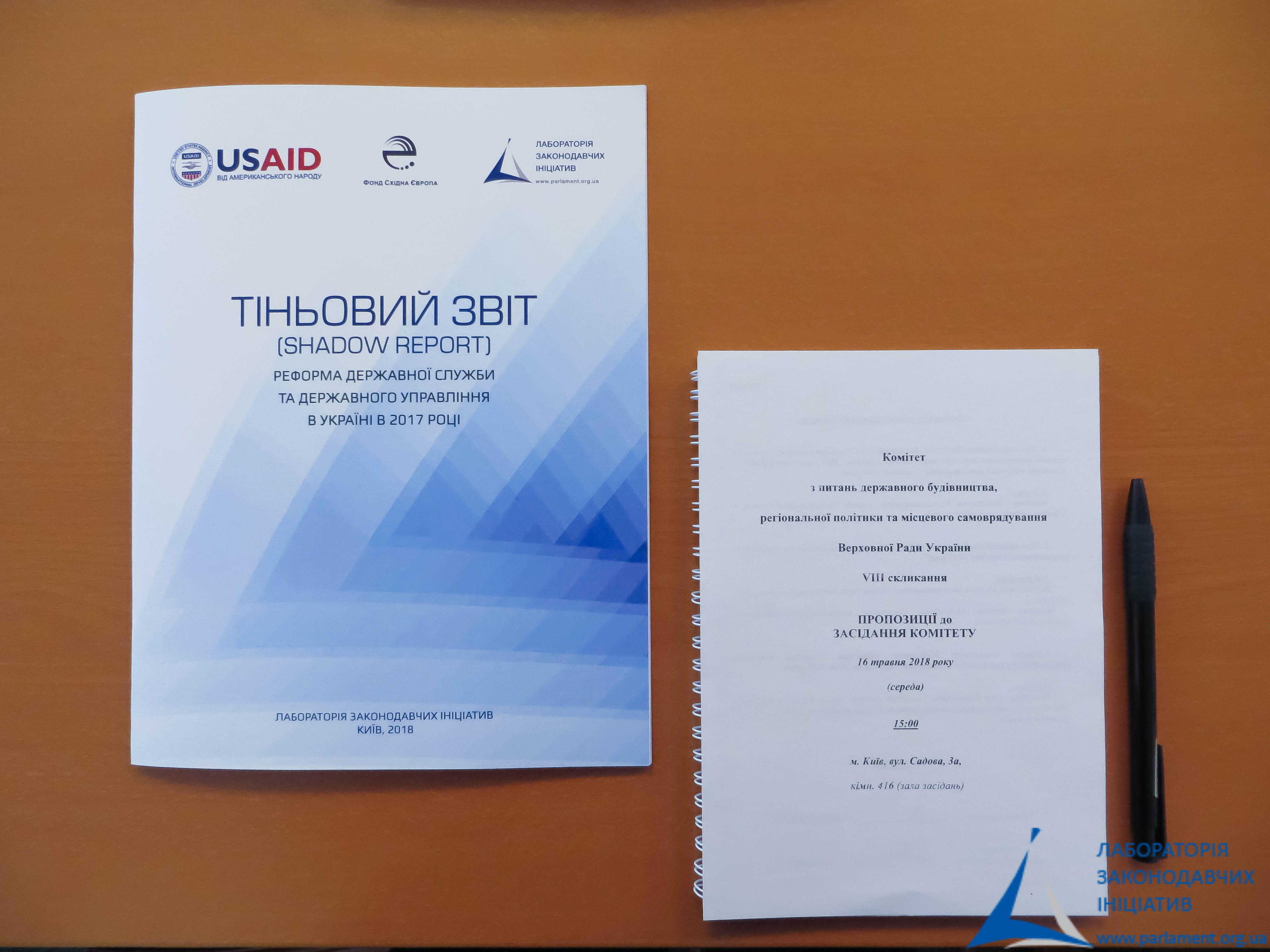 The report is includes the process assessment of key reforms implementation in the area of ​​public administration and public service of Ukraine, as defined by the new edition of the Law of Ukraine “On Civil Service”, adopted on December 10, 2015, which came into force on May 1, 2016, along with the relevant key policy documents of the Government on public administration reform, approved in 2017. The report studies the policy assessment in the field of civil service reform and public administration reform (PAR), including its compliance, retrospective progression and internal concurrence, integrity, planning, co-ordination and resource provision of implementation.

This report does not analyze the Verkhovna Rada and the President of Ukraine role in shaping the public policy and their coordination with the Cabinet of Ministers; local state administrations role and their coordination with central executive bodies; independent regulators role; local self-government role; budget process efficiency and reformation state of the public finance management system. 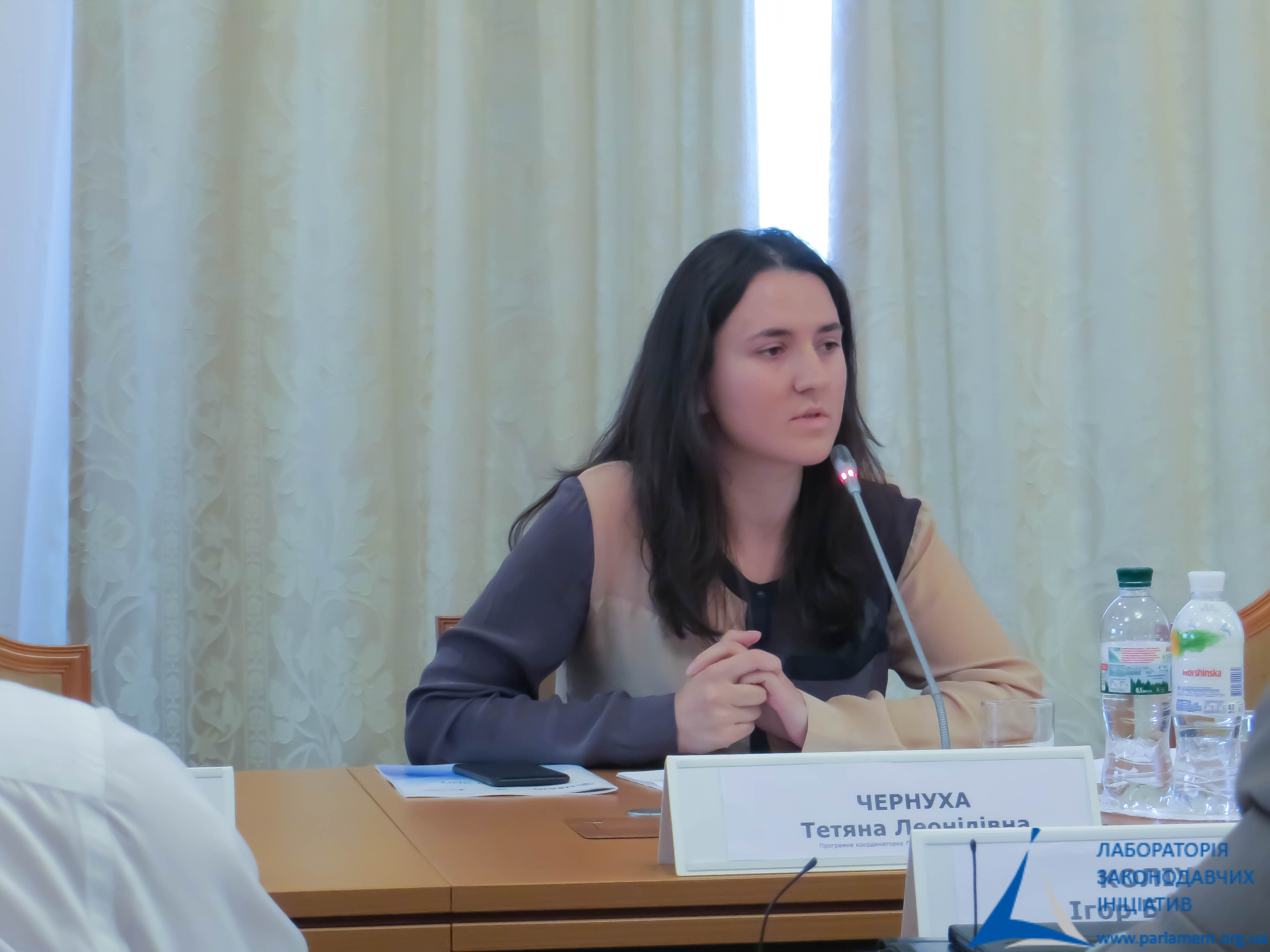 Tetiana Chernukha noted that the report prepared by the Agency for Legislative Initiatives is an alternative to the government report for 2016-2017 on the implementation of public administration and civil service reform of Ukraine.

“This report is prepared to support the Committee on State Building, Regional Policy and Local Self-Government control functions. We also pursue the goal of supporting the reform itself in such a way that it takes place as efficiently as possible and in order to respond in time to certain challenges, problems that may arise in the process of its implementation.”

“The Government’s report for 2017 contains a detailed description of the activities implemented during the year in areas covered by the Strategy, but does not reveal the state of objectives achievement, implementation of performance indicators and, in particular, the impact on problem solving. The reports also do not provide a clear understanding which planned measures were not implemented and why, and do not fully address the real challenges and risks associated with the PAR implementation, which are currently crucial and critical” Tetyana said.

The report presents a qualitative assessment of the reform implementation, based on the Public Administration Principles developed by SIGMA:
·     Coordination of implementation of public administration reform;
·     Formation and coordination of government policy and strategic planning of government activities;
·     Development of civil service and personnel management;
·     Accountability and institutional architecture of the central executive authorities system. Among the problematic aspects of accountability and institutional architecture of the central executive authorities system, the following should be singled out:
·     There is no clear distinction between political and administrative functions at the level of ministries;
·     The subjects’ functions of the policy formation and implementation are not distinctly specified;
·     The optimization and centralization of ministry functions were not held.

Summing up the presentation and discussion of the Shadow Report, Serhiy Vlasenko, Chair of the Committee on State Building, Regional Policy and Local Self-Government, noted that the Committee takes note of the information, taking into account the comments expressed by MPs during the discussion.