The report is devoted to the evaluation of the progress on key reforms in the field of public administration and public service of Ukraine, as defined in the revised Law of Ukraine «On Civil Service», adopted on December 10, 2015, which came into force on May 1, 2016, with the relevant key policy documents of the Government on the Public Administration Reform that were approved in 2017. The evaluation of policy in the field of reforming the civil service and public administration, including its relevance, consistency in retrospectives and internal consistency, integrity, planning, coordination, and resourcefulness of implementation are researched.

The research examines the progress of implementing the corresponding State policy measures from January 2017 to May 2018, as well as the analysis of the specific challenges of reforming and specific suggestions for the required steps in this area.

Only existing normative legal acts in the field of public administration from January 2017 to May 2018, primarily the Civil Service Law, have been studied with a view of preparing the publication.

The publication focuses on reforming the public administration system, mainly at the level of the CMU and CEB, especially as regards the coordination of the reform implementation, the development of capacity in relation to the formation of public policy, the development of personnel management in the civil service and the organization of the Government architecture and its accountability.

For this publication, the above-mentioned issues and essential elements of the public administration were not analyzed. They should be included in the comprehensive harmonization of the Public Administration Reform, still, they are insufficiently covered by the key Government policy documents: 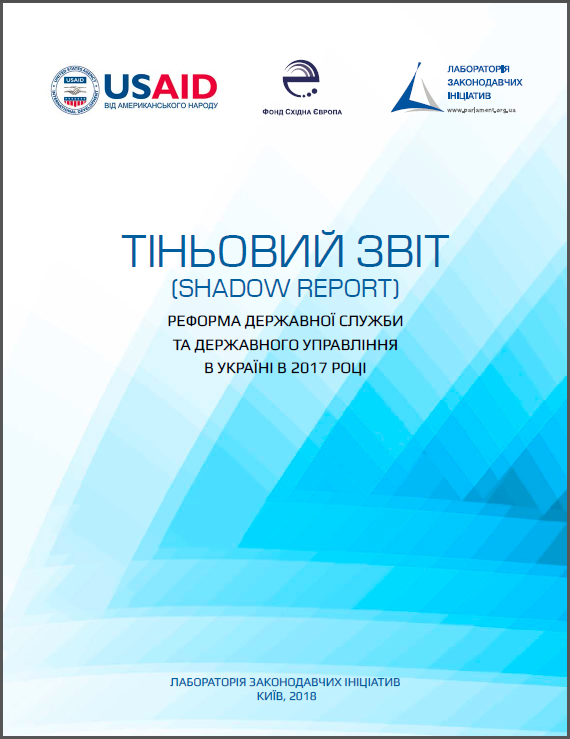 The preparation and presentation of analytical reports in the Shadow Report format is part of the project embodied by the Agency for Legislative Initiatives, supported by the USAID Rada Program: Responsible Accountable Democratic Assembly, implemented by the East Europe Foundation.