On April 12, the thirteenth Ukrainian School of Political Studies began its work at the First National Session in Kyiv. The USPS community welcomed the participants of the XIII Program, among whom are civil servants, politicians, lawyers, representatives of business, civil society, academia, art and media. Svitlana Matvienko, Chairwoman of the Board of the Agency for Legislative Initiatives, welcomed the participants of the XIII Program, emphasized that the main values ​​on which USPS is based are human rights, freedom of expression, tolerance and democracy.
Marten Ehnberg, Head of the Council of Europe’s Office in Ukraine, spoke about key values ​​of the Council of Europe and also focused on reforms and initiatives supported by the Council of Europe in Ukraine.
Katerina Ryabiko, Co-ordinator of the project “Strengthening the Dialogue between Civil Society and Key Public Authorities and Institutions in Ukraine in the Human Dimension”, OSCE/ODIHR, stressed that peace cannot be achieved without human rights protection. What is the responsibility? Who should we be responsible to? What is an authentic life and how does it relate to responsibility? What is abstract thinking and who thinks in an abstract way? What is an absolute? What is judgment by taste? What is common sense and how to build judgments based on it? What does it mean to think independently? What is identity? How do political judgments form? Yevhen Bystrytsky, PhD, Head of the Department of Philosophy of Culture, Ethics and Aesthetics of the Institute of Philosophy of the NAS of Ukraine, member of the USPS Supervisory Board, talked about the basics of responsible judgments with the participants.

Rules for building democracy in the 21st century. Why don’t they work in Ukraine? 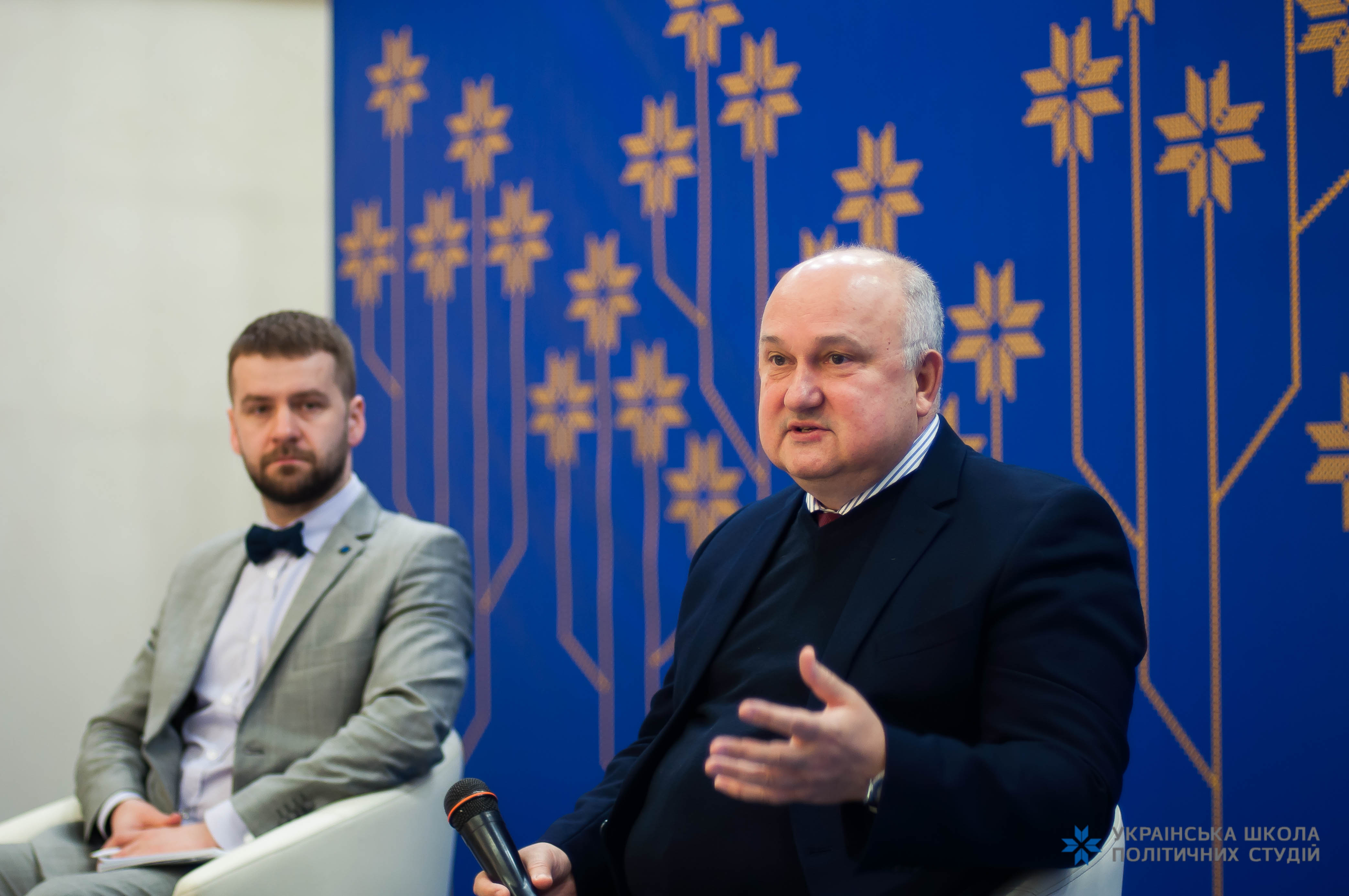 Ivanna Klympush-Tsyntsadze, Vice-Prime-Minister for European and Euro-Atlantic Integration of Ukraine, talked frankly with the participants about her work in the parliament and government of Ukraine.

National Health Service of Ukraine: change of the system of financing of healthcare in Ukraine Healthcare reform, or rather reform of the system of financing of healthcare, has been the subject of fierce discussions in the recent months. The manipulations and rumors surrounding this reform, in particular, the National Health Service, have become a reflection of the resistance of those players who are the most disadvantaged by the change of status quo. But what will the reform really change? Will the new system, even after the change of government, hold? What are the biggest risks of the new system? Ulana Suprun, Minister of Healthcare of Ukraine, and Oleg Petrenko, Head of the National Health Service of Ukraine, USPS alumnus, discussed these topics with the participants. What are public finances and what is their nature? What are the risks of financial abuse? Can budget expenditures be unprotected? What are the sources of financing a budget deficit? What is the subsistence minimum? What is the budget deficit monetization? What is the dynamics of active operations of the banking sector? These topics were raised by Victor Pynzenyk, PhD, Member of the Parliament of Ukraine, member of the Committee of the Verkhovna Rada of Ukraine on Budget. Peaceful Donbass: Are There Preconditions for the End of the Conflict? 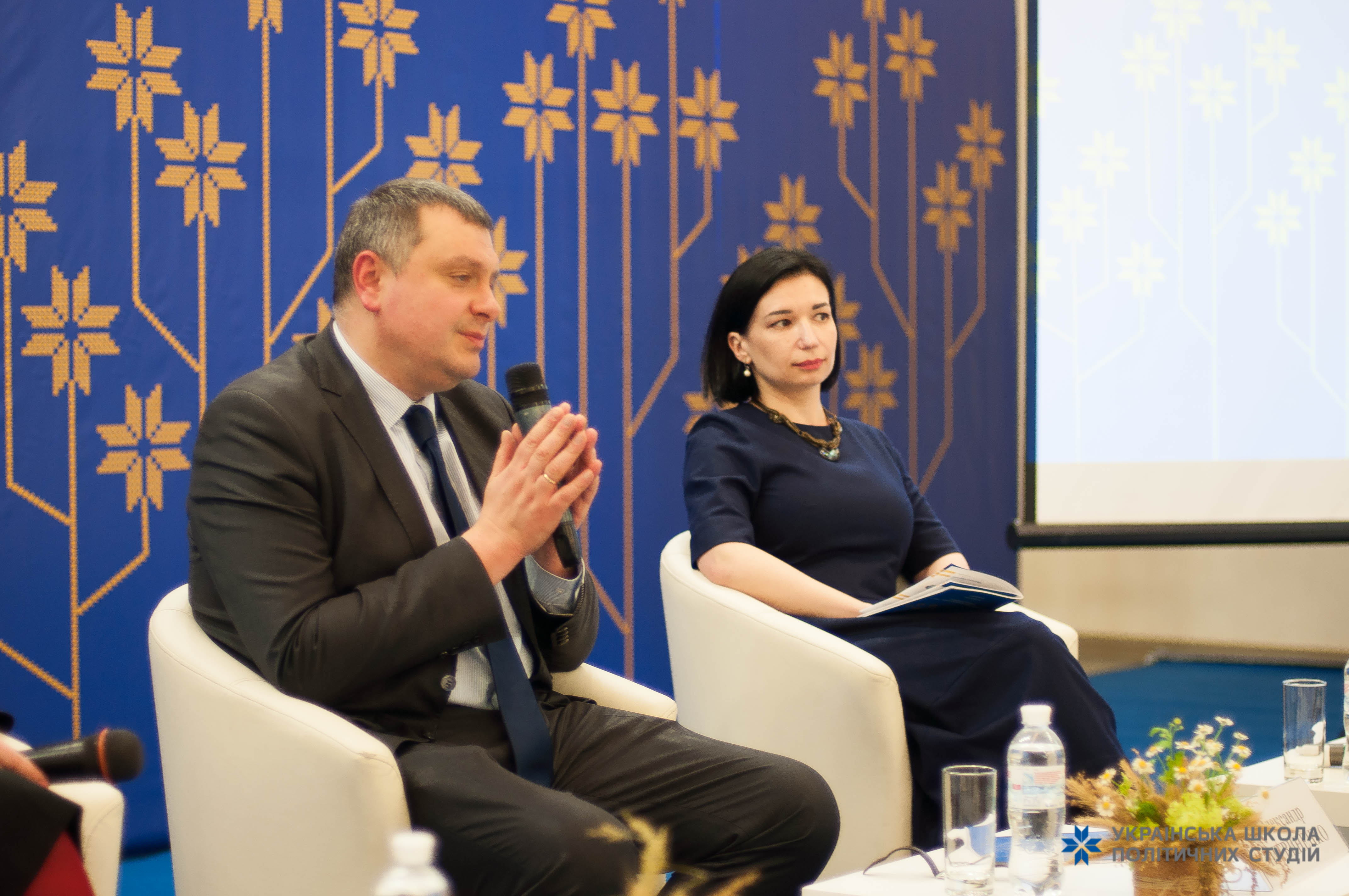 For four years now, Ukrainians are starting their day with the latest news on loss at the frontline. Millions of people have been forced to seek new homes. Hundreds of thousands are involved in the formation of a new Ukrainian army. Forecasts and even promises to end the conflict have been heard from many Ukrainian politicians on a number of occasions, but there is currently no single strategy to get out of the situation, and the Minsk negotiations leave many issues open. What are the ways to resolve the conflict? Are there any preconditions for an end? Participants discussed these issues with Oleksandr Lytvynenko, Deputy Secretary of the National Security and Defense Council of Ukraine, and Olga Ayvazovska, Chairwoman of the Board, coordinator of election and political programs of the Civic Network OPORA, a representative of Ukraine in the political subgroup of the Tripartite Contact Group Donbass, USPS alumna.

How to unite not to destroy, but to create? 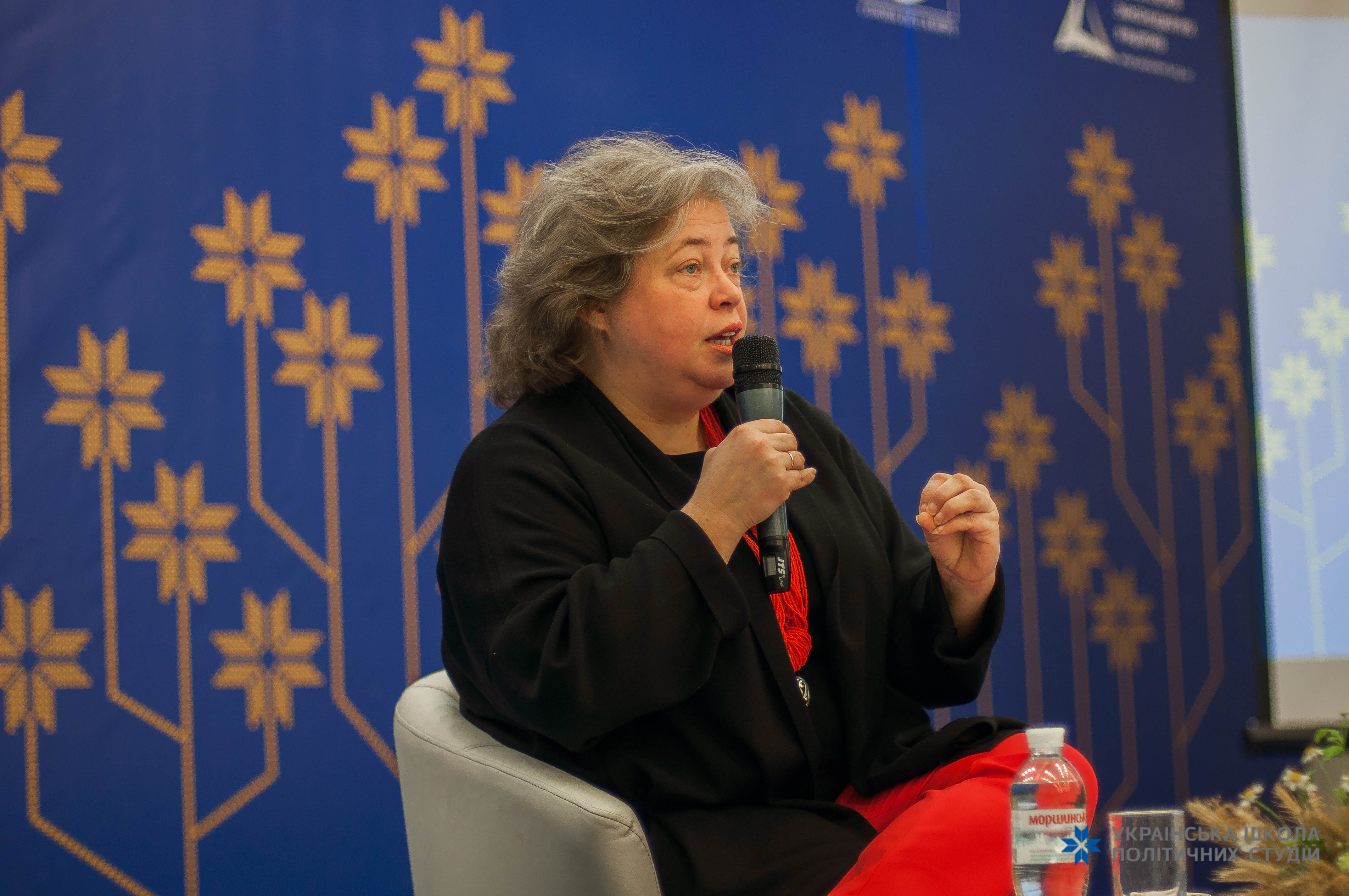 In a constant search for simple answers to complex questions, we imitate reforms. We move on to European ideals, demanding ready-made recipes. However, we need to find 18these recipes ourselves. Professionalism, trust, consistency are something that can drive us into the future. How to unite not to destroy, but to create? How to stop simulating change? Yulia Mostova, the editor-in-chief of the newspaper Dzerkalo Tyzhnia, member of the USPS Supervisory Board, spoke about the reality of Ukrainian politics.

Media framework of the country: can public broadcasting change the status quo? 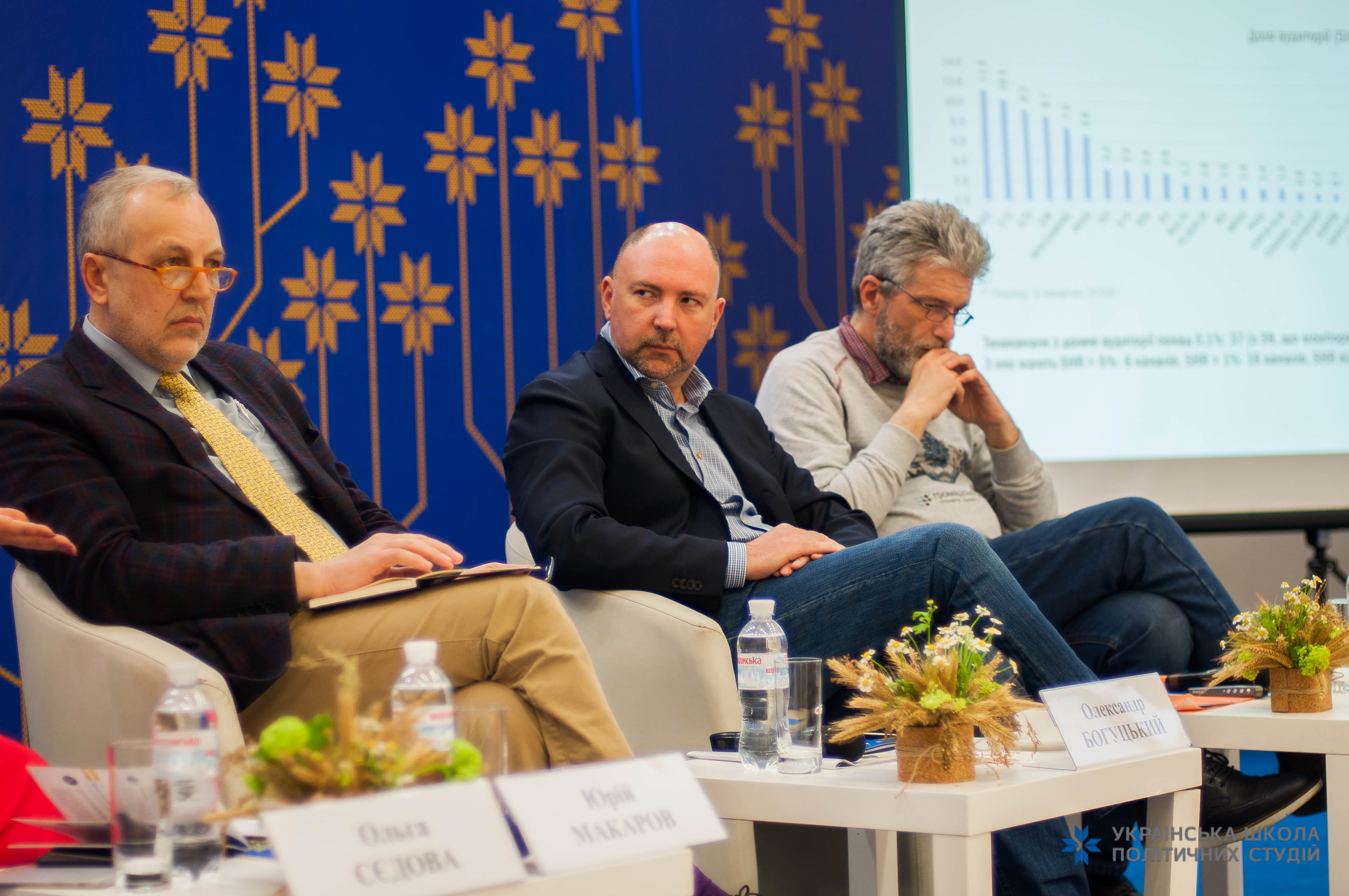 Why watch TV? What needs to be done to change the TV world for the better? Why are there so many news channels in Ukraine? Why communicate with the media? What are the benefits of radio compared to other media? How to provide funding for public broadcasting? Witnesses of what media revolutions have we become? Can public broadcasting change the media scenery of Ukraine? This discussion was held among Oleksandr Bogutsky, Director-president of the ICTV channel, board member of the investment and consulting group EastOne, USPS alumnus, Andriy Kulykov, Chairman of the Public Broadcasting NGO “Hromadske Radio”, and Yuriy Makarov, member of the Board on educational issues of public broadcaster “NSTU”.

The panel was moderated by Olga Sedova, Coordinator of National Programs of the Embassy of Sweden in Ukraine.

In search of a trigger mechanism: driving and restraining factors of modernization of Ukraine What are the objective laws and circumstances governing the world? What factors help us become a European country? What hinders the realization of the European choice of Ukraine? What strategies of survival are practiced by Ukrainians? What are the reasons for the immaturity of the revolutionary minority? What is the new ethics? What is the forecast regarding the future development of Ukraine? Oleksandr Paskhaver, PhD, President of the Center for Economic Development, Corresponding Member of the Academy of Technological Sciences of Ukraine, Honored Economist of Ukraine, spoke about modernization of Ukraine.

The panel was moderated by Katerina Venzhyk, Editor and Project Leader of Prostonomics, USPS alumna.

Occupied Crimea: What does it mean for the world? The annexation of Crimea marked the beginning of a break in the established system of global security. Having challenged international law, Russia has not received the proper resistance, and hundreds of thousands of Ukrainians are in a “gray zone” both in terms of law and security. At the fourth year of occupation, there are no definite strategies for reintegrating Crimea. How to make Crimea the key issue on the agenda again? How to turn the focus not to the territory, but to people? How to attract world attention to Crimea? Refat Chubarov, Member of the Parliament of Ukraine, Head of the Mejlis of the Crimean Tatar people, talked about this with the participant.

The conversation was moderated by Aliim Aliyev, Program Director of Crimean House Kyiv.

How to overcome intolerance in society? How do we perceive the Other? What are the stereotypes and how do they affect our perceptions? Why not rely on the first impression? Why are stereotypes so persistent and pervasive? What is tolerance? How does hatred for otherness begin? What is hate speech? How can bias be overcome? Larry Olomofe, a former OSCE ODIHR’s adviser on combating racism and xenophobia, had an interactive discussion on these issues with the participants.

Value orientations of Ukrainian society in the historical perspective 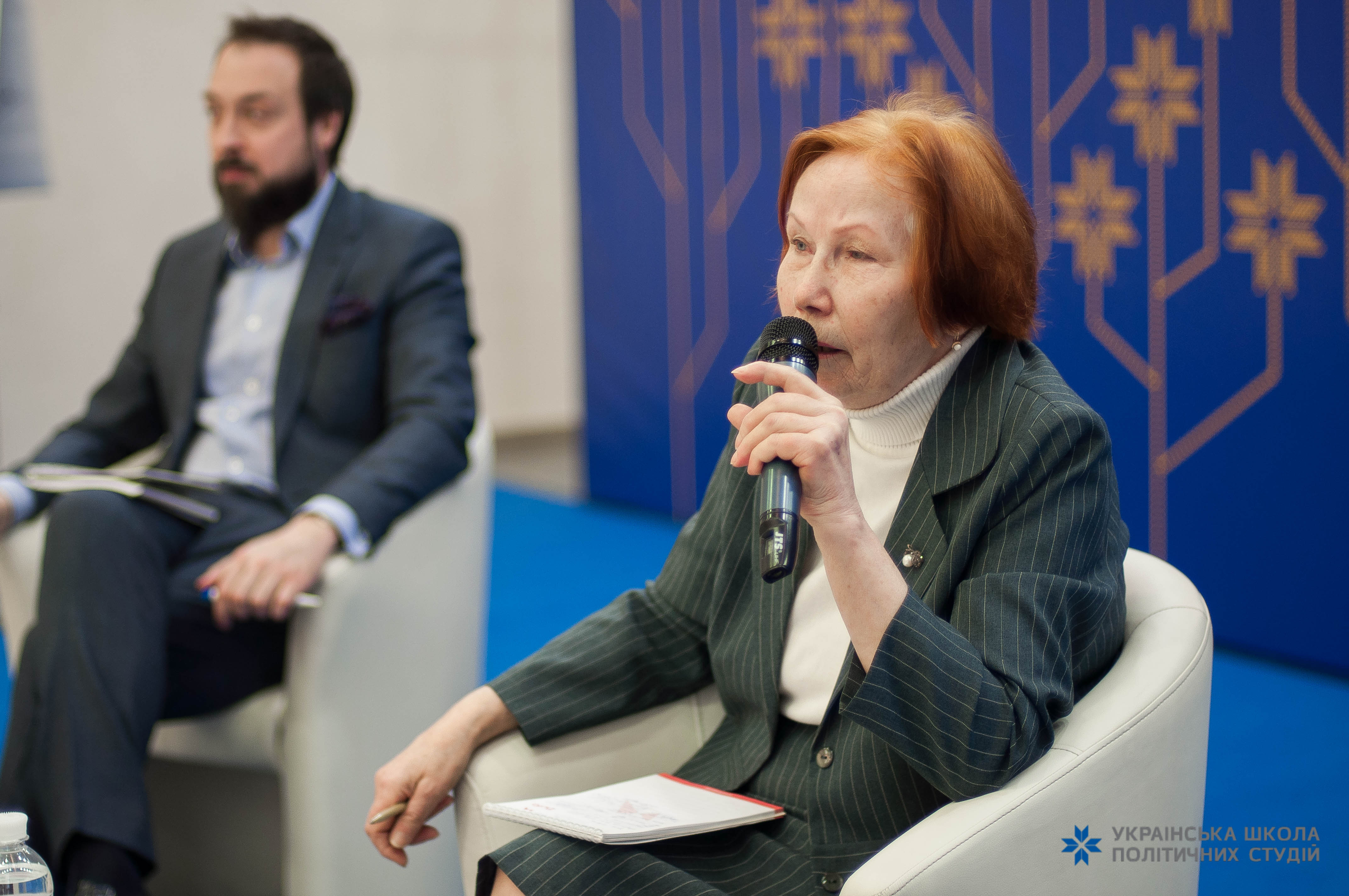 What are the values ​​and what role do they play in society? What is a communicative code of culture? Are values ​​stable and unchanged? What is identity? What is historical memory and how does it work? How does a tradition form? What ideological guidelines does wartime need? What are the value orientations of Ukrainian society in the past and today? Do we repeat our history? Natalia Yakovenko, Professor of History Department of the National University “Kyiv-Mohyla Academy”, spoke about value orientations of Ukrainian society in the historical perspective.

The discussion was moderated by Andriy Vyshnevsky, a lawyer, executive director of the Tomorrow’s Lawyer NGO, USPS alumnus.