EventsNEWS 28 Mar 2018
Comments Off on Presentation of the Shadow Report “On Implementation by the Ukrainian Government of the European Court of Human Rights decision in the Case of Burmych and Others v. Ukraine” Twitter Facebook Telegram

During the round table Svitlana Matviienko, Chairwoman of the Board of the Agency for Legislative Initiatives, presented the Shadow Report “Implementation of the European Court of Human Rights decision in cases “Yuriy Mykolayovych Ivanov v. Ukraine” and “Burmych and others v. Ukraine”, prepared by an expert of the Agency for Legislative Initiatives.

Read Shadow Report “On Implementation by the Ukrainian Government of the European Court of Human Rights decision in the Case of Burmych and Others v. Ukraine” 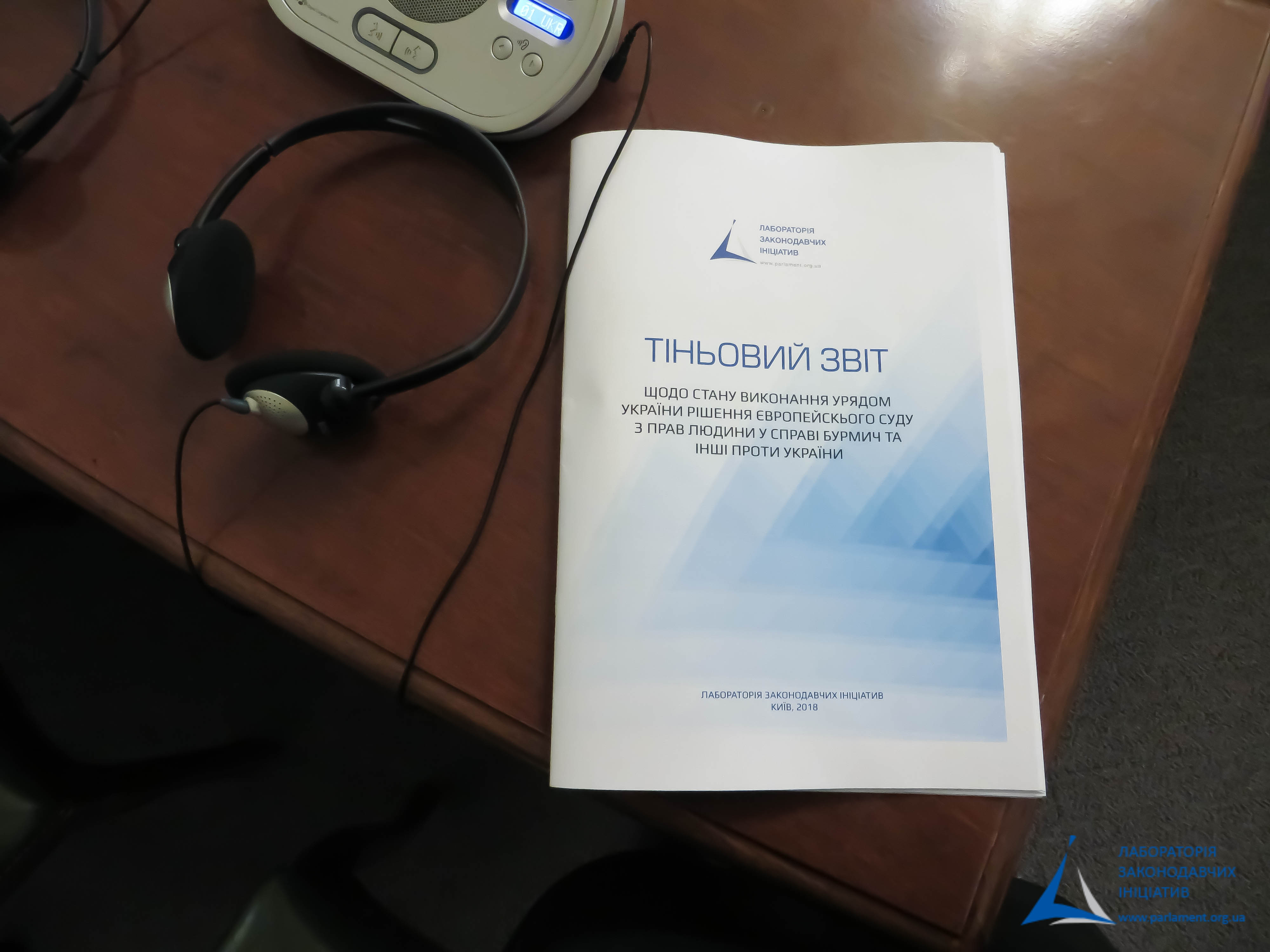 Core of the Problem

The problem of non-enforcement of national courts’ decisions was first recognized by the European Court in 2004 in the cases of “Zhovner v. Ukraine” and “Voytenko v. Ukraine”. Unfortunately, over the past five years, the Government of Ukraine has not taken effective measures to address this problem, which has led to a significant increase in the number of complaints to the European Court. As a result, the Court decided to apply the pilot decision in the case of “Yuriy Mykolayovych Ivanov v. Ukraine. In this case the Court points out to the existence of structural problems that are of a widespread and complex nature and require the implementation of comprehensive and complex legislative and administrative measures, involving various national authorities.
The European Court determined that the violation was a consequence of the practice incompatible with the provisions of the Convention for the Protection of Human Rights and Fundamental Freedoms (ratified by Law № 475/97-VR dd. 17.07.1997), which is the systematic non-compliance of the respondent government with the national courts decisions for which the respondent government is liable and in connection with which the parties whose rights are violated do not have effective remedies.

On October 12, 2017, by the decision of the Grand Chamber of the European Court of Human Rights in the case of Burmych and Others v. Ukraine, the European Court handed 12.148 cases under the control of the Committee of Ministers of the Council of Europe. It also decided to transfer all such cases under consideration, as well as such future cases, to the Committee of Ministers for consideration in the framework of general measures to implement the pilot decision in the Ivanov case, including provisions for compensation for failure to comply or late execution of national court decisions and payment of a debt awarded by a court decision.Thus, public authorities should be called upon to introduce at national level a targeted mechanism to ensure that all actual and potential applicants with valid complaints under the Convention are compensated. In response to the Burmych case decision, a high-level meeting was held in Strasbourg on 17 November 2017 with the participation of the Ministry of Justice, the Presidential Administration and Parliament, which discussed the creation of an ad hoc compensation mechanism for all those mentioned in the applicants’ decision, which should take place in parallel with the efforts, aimed at reaching a long-term solution to the root causes of these problems. Svitlana Matviienko, Chairwoman of the Board of the Agency for Legislative Initiatives, presenting the Shadow Report prepared by the expert of the Agency for Legislative Initiatives, noted that the source of the information for the Report was the annual report on the activity results of the Government Commissioner for European Court of Human Rights in 2017, responses to the Mr. Lishchyna’s query to Member of the Parliament Ruslan Sydorovych, information provided by the Ministry of Justice to the Ombudsman for Human Rights, the Ombudsman on Human Rights annual report on the state of observance and protection of human rights and freedoms in Ukraine in 2017 and information received from the applicants in the case of Burmych.

“Having examined all these facts, we came to the conclusion that this problem can be analyzed on the basis of two positions,” mentioned Svitlana.

“First of all, the lack of political will blocks the process of resolving this issue, and here we do not aim at criticizing the Ministry of Justice of Ukraine. Our goal is for all interested stakeholders to understand that it’s time to raise this issue at a very high state level,” emphasized Svitlana.

f we are talking about taking measures to implement the national courts decisions, it is worth emphasizing the mechanism revealed by our experts, which consists in working with the Resolution of the Cabinet of Ministers of Ukraine “On approval of the procedure for using the funds foreseen in the state budget for payments related to using decisions of foreign jurisdictional bodies adopted on the results of consideration of cases against Ukraine” №408 dd. 07.03.2017.

“We believe that if we make some changes to it, it will allow us to begin to enforce court decisions and to understand one simple thing – we need not only to enforce decisions, but to understand that it is necessary to change the system itself and the vision frame. Because we can endlessly try to enforce all of these decisions, but without changing the system, we will still collapse. Therefore, changing the point of view on this problem was our main task,” emphasized Svitlana Matviienko.

The CMU Resolution №408 can be improved as follows: first of all, a large-scale collection of information on the decisions to be executed and the state of their enforcement should be carried out. Amendments to the Resolution of the Cabinet of Ministers of Ukraine No. 408 will allow to undertake expenditures for taking general measures. After that,  it will be possible to calculate the amount of indexation and compensation for long non-enforcement of court decisions. Then, the most important step is to provide adequate funding for these payments. It is at this stage that the coordinated work of the Verkhovna Rada of Ukraine is needed and the bringing up this issue not only within the professional lawyers circle, but also a massive informing of the public.

The second important point emphasized by the Shadow Report is to take measures to implement an effective system of enforcement of domestic courts.

In our opinion, the main disadvantages of the mechanism proposed by the Government are:

“We are ready to cooperate with all stakeholders to solve this problem,” stressed Svitlana, “as the problem is extremely relevant, and if it is not considered in all its bearings and a mechanism for its solution is not formed now, then there may be collapse.”