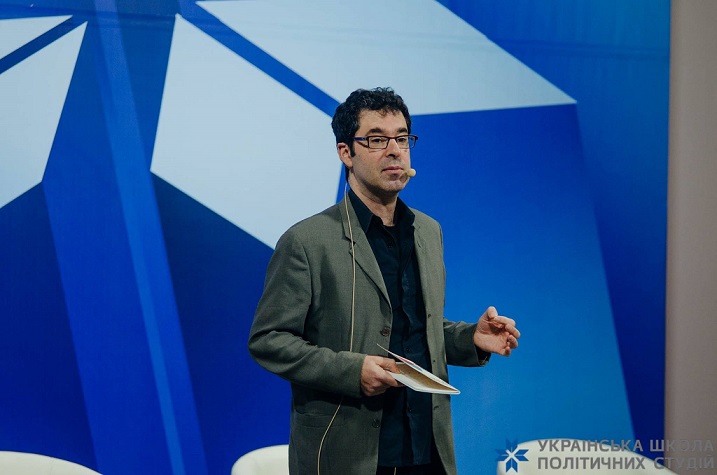 It became this excitement thing. What is he going to do something next? Will he say something bad?

So, this is comedy show, where they had someone dressed as Hilary Clinton talking about policy and the news media were all focused on microphone over here and she’s like: Hello! I’m talking about policy, and the media is like – what is Donald Trump going to say?

So, if you had a figure who is really good at attracting attention – “What is going to do next?”, someone who can get the media to cover whatever crazy thing he’s going to do next. That figure is someone who worry about because they’re making the news into entertainment. Again, and again in the literature on fascism you find this point. When the news became spectacle, it is very dangerous. When people just wait for this feeling “what is next?”.

In democracy, we are supposed to get together and figure out what to do about our problems. But if we have no idea, if we can’t see the world, because we have this myth, then we are actually not addressing the problems.

So, the ideals of history is truth and objectivity, but when you use history for national pride, like Victor Orban in Hungary wants educational system to teach great Hungarian past times, when that happens, you eliminate the base for discussion about reality.

Myth is usually there for the purpose of nationalism and populism. Most people object to nationalism on moral grounds. They say, it is bad, it is morally bad.

I am not a judgmental person; I would never come and tell people you cannot be patriotic. People should do what they want. But myth is bad. Nationalism has a price on your perception of reality.

That’s my worry about nationalism. There are two kinds of nationalism: good and bad. Good nationalism is nationalism by a group that has been excluded, that had a language taken away, that isn’t allowed to be independent and make its own decisions.

The next example of propaganda is when good nationalism is used to advance bad nationalism.

And this undermines equality. This is use of equality to undermine equality. And my objection is not a moral objection. I said that my objection is different. It’s bad for you or me to tell that “My country is a greatest”. Think of American exceptionalism. The reason it is bad is because none of us is that good, but one group of us says we the greatest, we are getting something deeply wrong.

The political technologists in Russia have done some very interesting things to distort reality. Think about the slogan of Russia Today. It is “Question more”. How can it be a bad thing? Isn’t it democratic to ask more questions?

That is very clever. Because what Russia figured out is if you have the news deliver everything – if you look at RT, there’s Nazis, there’s Stalinists, there’s everything!

The Nazi says this, the Stalinist says this, democrat says that. What Russia figured out, what Surkov figured out is that this is another way of using democratic ideals to undermine democracy. “Question more” sounds very democratic. RT is giving you every conspiracy theory.

Does anyone know how Donald Tramp came into the national politics? Do you know the specific reason he started getting interviewed by the news? Because he said Obama was born in Kenya. That is how he came to the news. He said that President was born in Kenya.

When you have a lot of conspiracy theories and people say: Oh, it could be true. Than people do not know what to believe anymore. Peoples lose the sense of reality.

And if you read Hanna Arendt about totalitarianism, she talks about how the Nazi and Bolsheviks survived off of conspiracy theory. That’s how they came to power.

That’s exactly what Donald Trump said – the media is controlled by Obama, you can tell because they’re not talking about how Obama controls the media and is born in Kenya.

In Russia, once you destroy reality, what is there left? All there is left is myth.

So that I think is what’s happening in Russia – conspiracy theory gone mad and then you have a national myth. And like all near-fascist myths, it’s harshly antigay, harshly misogynist.

Putin is like a father of the patriarchal family. Equality is the enemy. And they need the enemy. We are the best, Russian Empire is the best.

We do the same in America too. Many Americans believe that America was ordained by God to rule the world.

How do we start instilling a sense of reality? When you destroy reality, when people are talking about conspiracy theories, it’s very difficult.

Conspiracy theories are ways of entertaining yourselves. In the literature about the Soviets and the Nazis, you find people making a distinction between language used to describe reality and language just used to create fear, emotion.

If you say the words “climate change”, many Americans think you’re talking about a conspiracy to make us all pro-gay.

One problem is that we think language is used to describe the world but is not. Then we become confused about what actually is going on.

So how do we restore reality is a very important question. At Yale we have a group called the Yale Climate Change Committee and they go and talk to people in Republican state who believe climate change is a conspiracy but who have to deal with the effects of climate change.

They say – you’ve got a lot of rain lately, or the water is coming into your house, what are you going to do about that? But they don’t say “climate change”.

So a lot of the time the myths become connected with certain words, and words become magical words, and magical words are no longer about describing things, they are about a magic world, and that’s why after the end of the 1945 denazification took the form of eliminating a lot of the language.

When you start seeing words being magical, it’s a little bit dangerous. Even I love the Revolution of Dignity but still language can be a dangerous thing.  You think it is describing but instead it’s creating this bigger myth for you.

On the one hand you have national myth, and on the other you have libertarian, technicists, efficiency, capitalism. I understand why efficiency, market, private sector is important.

What makes Ukraine important for the world right now is the Revolution. Ukraine understands things and did things as a civic community that are not just about their own pocketbook and there are not just about efficiency or having more private sector. Different people came together with very different viewpoints and said: Ok, it is a very serious problem. When does that happen? That never happens – and you did it. Everyone is curious about this. And here is optimism.

I hope that Ukraine does not say that we need to become like everybody else. It is important to come up with your own ideals, your own way of going.