On November 14, 2017, the Verkhovna Rada of Ukraine hosted a press briefing dedicated to the presentation of the policy paper “Proposals Concerning Policy on Conflict of Interests of MPs of Ukraine”. 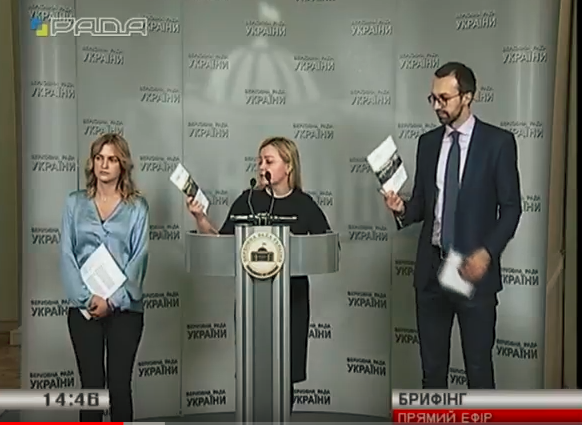 This briefing organized in cooperation with the Agency for Legislative Initiatives is dedicated to the notion that lies at the heart of political corruption, this is especially true for parliament. This notion is a conflict of interests, that is, the phenomenon when people who have business in the area they regulate as officials are elected to parliament or to a public office. A typical example is Mr. Dubnevych, Chairman of the VRU Committee on Transport, who has business in the field of supply to Ukrzaliznytsia. That is, on the one hand, he chairs the Committee and, therefore, can influence Ukrzaliznytsia, the Ministry of Infrastructure and his deputies; and, on the other hand, he supplies equipment and is making a lot of money, which makes it possible for him to capitalize, design his political projects, engage in acts of corruption, and so on. I know that the Anti-Corruption Bureau has launched an inquiry into some of his affairs.

Why does it happen? Because we do not have any safeguards against conflicts of interest, although it is much easier to keep such people out of office than to investigate their actions, study their schemes, spend investigator resources, resources for travel to offshore zones and abroad to collect documentation, press charges, and spend years in court to punish these corruptors and confiscate stolen money in the future (possibly!). It is easier to prevent them from access to these positions. If you chair a committee, you should engage in something else in life. Dubnevych is a specialist in transport, he has a transport business, let him deal with issues of culture or spirituality, for example, or youth and sports. That is a sphere that has nothing to do with his personal business. This is precisely how European politicians are appointed to positions to avoid conflicts of interest. We are implementing the same initiative in parliament so that we could use a draft law, a Code of Conduct to bar politicians with conflicts of interest from holding public offices in the area of their private business interests. Svitlana Matviienko, Chairwoman of the Board of the Agency for Legislative Initiatives:

We want to present our proposals for a policy on conflicts of interests of MPs of Ukraine. This is a continuation and analytical lead-in of the Agency for Legislative Initiatives to the work on adoption of the Code of Conduct in the Ukrainian Parliament. Settlement of conflicts of interest is one of the main cross-cutting issues that will make it possible to overcome corruption as well as provide an important safeguard. This analytical material with concrete proposals, which Ulyana Poltavets will elaborate on, is handed out to MPs, faction leaders and, in fact, the Chairman of the Verkhovna Rada of Ukraine. As an organization that cooperates with numerous international foundations and donors, such as USAID, the Kingdom of the Netherlands, OSCE/ODIHR, we urge to adopt the Code of Conduct in Parliament with a list of so-called safeguards, possibly even including penalties, since it is the only thing that will help Ukraine get out of this corruption pit mentioned previously by Mr. Leshchenko. Ulyana Poltavets, author of the study, Program Director of the Agency for Legislative Initiatives:

Parliament’s role in combating corruption is not limited to adopting anti-corruption laws. First of all, a democratic parliament must conform to its own standards of openness and transparency. Of course, the main obstacle to adhering to these principles is MPs’ conflicts of interests. The Ukrainian parliamentary practice abounds in examples when a representative of a particular industry is a member or the head of the specialized parliamentary committee. According to the analysis of the 2016 electronic declarations of 422 MPs of Ukraine of the 8th convocation, 131 MPs (31%) have equity rights, and 108 MPs (25.6%) are the final beneficiaries of legal entities. At the same time, the analysis revealed that 38 MPs have a conflict of interests, including two chairpersons of committees (Chairperson of the VRU Committee on Health Care and Chairperson of the VRU Committee on Transport). The record holders in terms of the number of members with conflicts of interests are the Committee on Agrarian Policy (20 MPs) and the Committee on Construction, Urban Development and Housing and Communal Services (7 MPs). Some enterprises may belong to family members rather than MPs themselves, which anyway is contrary to the provisions of the Law of Ukraine “On Prevention of Corruption”: rights cannot be transferred to the benefit of family members.

Given the above, it is advisable to introduce a comprehensive conflict-of-interest policy. In particular, it is proposed to clarify the provisions regarding the inadmissibility of MPs’ business activity and availability of equity rights, by aligning the Commercial Code and the Law of Ukraine “On Prevention of Corruption”. Another extremely important element, according to Ms. Matviienko, is the adoption of the Code of Conduct, which would take into account MPs’ opinions and best international practices. A separate element of the legislative regulation of conflicts of interest is the adoption of a law on lobbying. The NAPC as the main tool for managing conflicts of interest should begin to operate independently and impartially.

This study attests to the need to include the issue of conflicts of interest in the political agenda. We hope that MPs, and in particular the Chairman of the Verkhovna Rada, as well as the Committee on Rules of Procedure, will take this into account and, in cooperation with the NAPC, will manage to implement an effective comprehensive policy on conflict of interests.

The first module of the School of Community Leaders 2020 is coming to an end!