Implementation of the policy of equal rights and opportunities for men and women always serves as an indicator of ethics, transparency, and readiness to democratic transformations, and the Ukrainian parliament takes important steps in this direction as is required by the international standards and the time.

The 8th Verkhovna Rada is different from the previous convocations not only by the biggest number of women among its members over the entire time of the Parliament’s existence, but also by the active promotion of “gender interests” in terms of the public policy making. And it is not by chance that the Verkhovna Rada gender sensitivity is on the agenda, as it is one of the main components of the parliamentary reform in accordance with the Pat Cox recommendations and the Jean Monnet Dialogues.

The gender sensitive parliament can be defined as an institution that meets the needs and interests of both men and women in its structure, operations, methods, and work generally. The aim of the gender sensitive parliament is to overcome the obstacles faced by women on the way to the full-fledged participation in politics, as well as to demonstrate a positive example and to define the model of opportunities for the society in general.

Analysis of the provisions governing the structure and methods of the parliamentary work is based on the proposals to amend the Verkhovna Rada Rules of Procedure in order to introduce the gender-based analysis of draft laws, instruments to counteract sexism and discrimination in the behaviour of the members of parliament, as well as to ensure the balanced representation of women and men in the Ukrainian parliament. 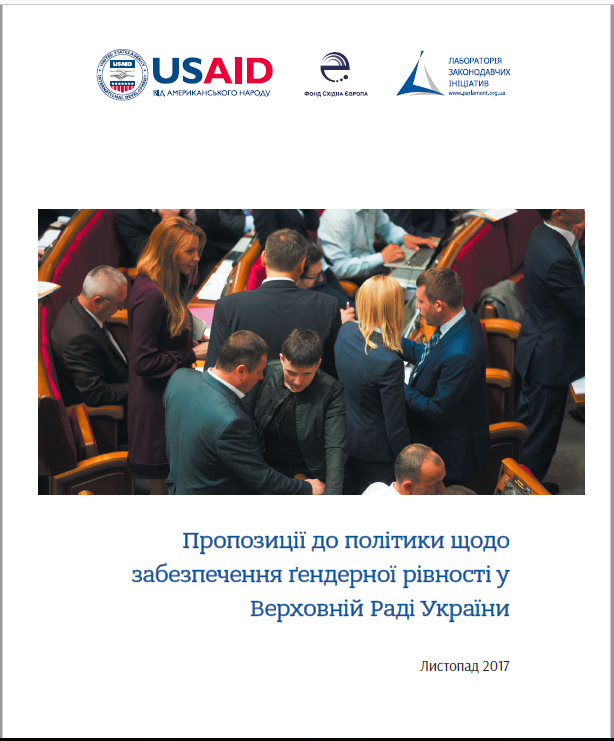 The preparation and presentation of Policy Proposals is part of the project embodied by the Agency for Legislative Initiatives, supported by the USAID Rada Program: Responsible Accountable Democratic Assembly, implemented by the East Europe Foundation.