On September 28, 2017, the Volnovakha Regional Center of Culture and Leisure (94 Tsentralna St.,) hosted the Town Hall Meeting on the topic of “Strategies for the development of Youth Policy in Donetsk Region”.

The event was organized by the Agency for Legislative Initiatives together with the Interns’ League and the Ministry of Youth and Sports of Ukraine on the initiative of Dmytro Lubinets, MP of Ukraine, in the framework of the Model District Project, supported by the USAID Rada Program: Responsible Accountable Democratic Assembly, implemented by the East Europe Foundation.

The discussion took place in the Town Hall Meeting format, which implies competent and efficient discussion of any specific issues of public interest and serves as a tool for citizen participation in governance. Town Hall Meetings are intended to highlight the role of the public voice in the policy decision-making process by providing feedback from the public on key issues of public interest.

During the event in Volnovakha, we piloted a web app for holding Town Hall Meetings, developed by the Agency for Legislative Initiatives. This web app is designed to facilitate handling information both during the process of discussion, and during processing and analysis of data. Information is better structured and easier to perceive, which improves the level of discussion. The web app helps you quickly process and display voting results on monitors; it also summarizes discussion results in a download-friendly format for their further analysis and processing. 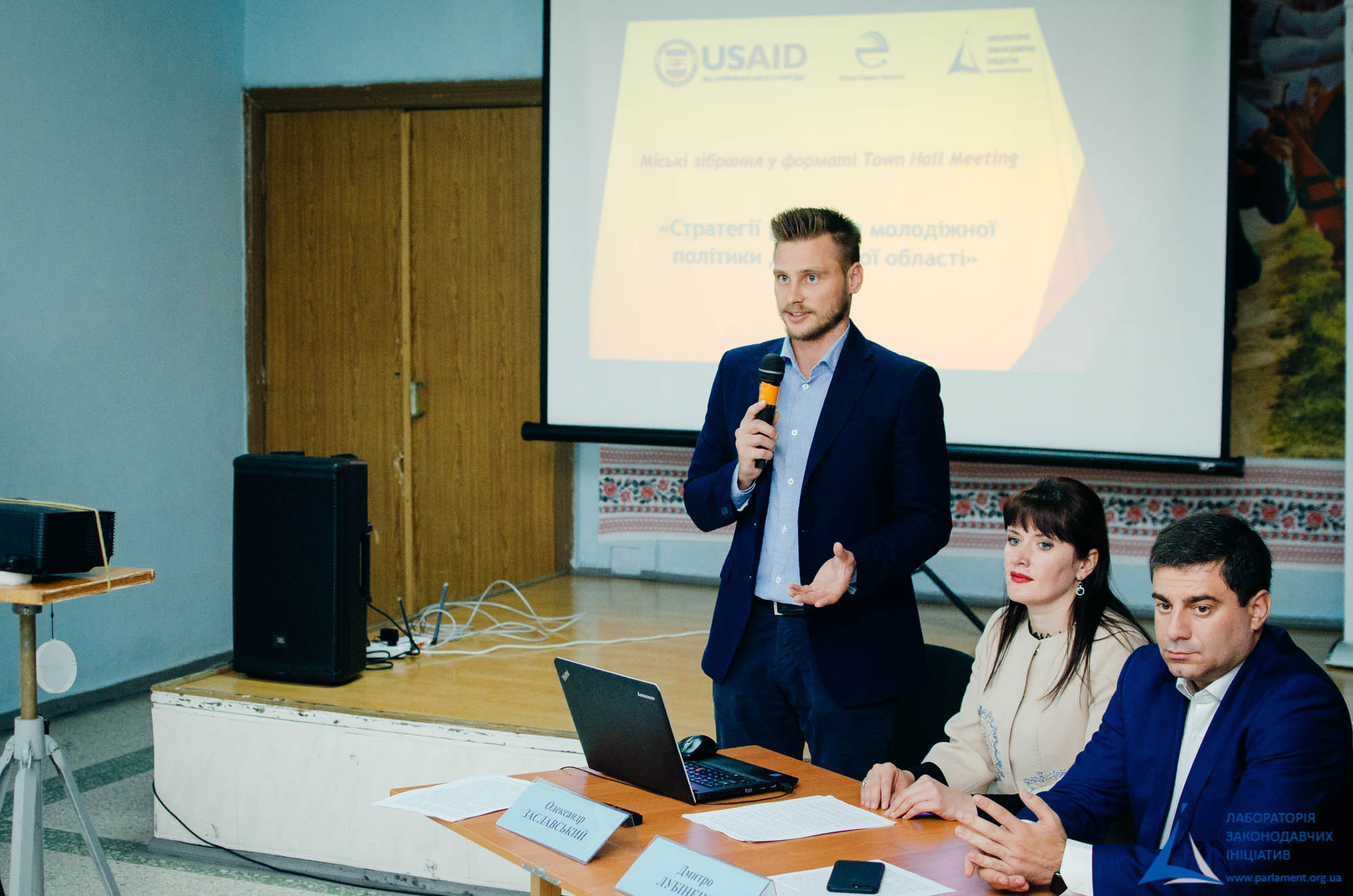 Oleksandr Zaslavskyi, Deputy Chairman of the Board of the Agency for Legislative Initiatives, emphasized the advantages of the Town Hall Meeting format compared to other formats of public gatherings:

“First of all, this format gives everyone an opportunity to speak and be heard – it is a structured discussion. Secondly, the format involves the adoption of a decision – you will have the opportunity to vote for one of the options. Thirdly, the decision is made on the basis of preliminary expert work – the decision you make will be based on facts and rational arguments.” 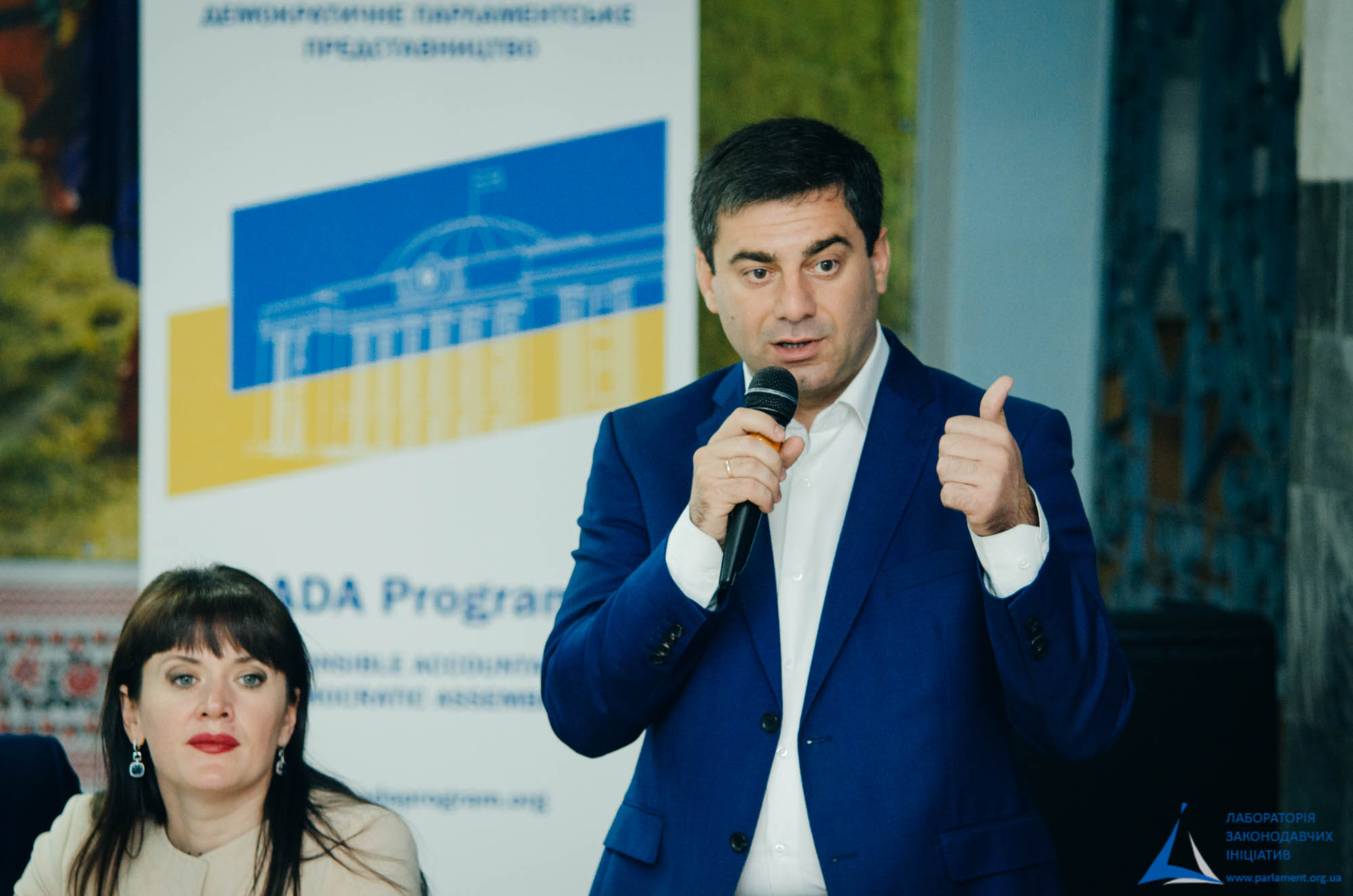 Dmytro Lubinets, MP of Ukraine, said that the idea of addressing the youth is really a proper one. Because it is young people who will develop Donetsk region and influence the whole of Ukraine. It is appropriate that changes and initiatives should come from the youth on the ground; they are much better aware of their needs than MPs. Often MPs vote for a decision without clearly understanding how it will work and without understanding the problems of people who will then fulfil these decisions. The Town Hall Meeting format makes it possible to directly hear the opinion of people and make it known to decision-makers who have to vote.

What is the main problem of the events spawned in 2014? The problem is that nobody ever tried to develop civil society, public organizations, or youth movements in Donetsk region.

The example of young people working in “I am Volnovakha” fund demonstrates how by developing themselves they develop their town and region as a whole. The increase in the number of such towns, active involvement of youth, and development of civil society will contribute to the advancement of Donetsk region and the whole of Ukraine. 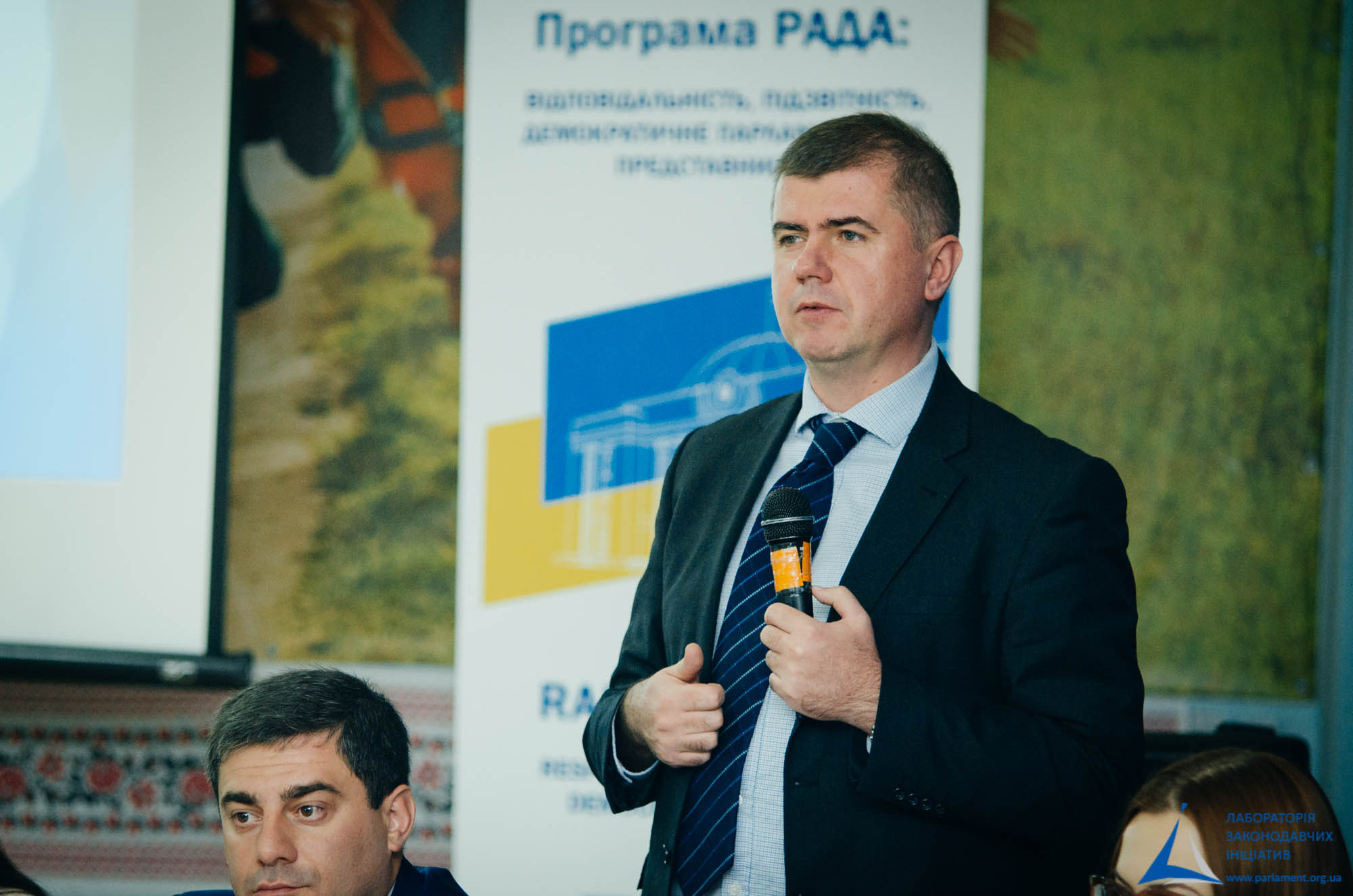 Oleksandr YAREMA, Deputy Minister of Youth and Sport of Ukraine, emphasized the importance of establishing partnership relations with civil society. Only through such cooperation can we build something reliable, durable, and at the same time really interesting and needed for young people. A youth center should be a friendly space. It should work when young people need it; it should generate interesting ideas and initiatives that would attract young people, and make young people feel at home there.

The slogan of the Agency for Legislative Initiatives is “Think and act ahead of time”, and the Agency is ahead of time working to establish communication between MPs and civil society, which provides a solid foundation for further understanding and cooperation.

The most important thing is to strengthen horizontal relationships. The youth of all regions has to meet in different formats, on different platforms, and in different venues. It is important that the country develop, move ahead, and establish a better understanding between young people. It is very important that youth spaces become growth points for the region spawning new youth initiatives, new organizations, new ideas, points of view, etc.

“We have a lot in common. We just have to talk about these things, plan ahead together, and outline the steps that will help us move faster and faster.” 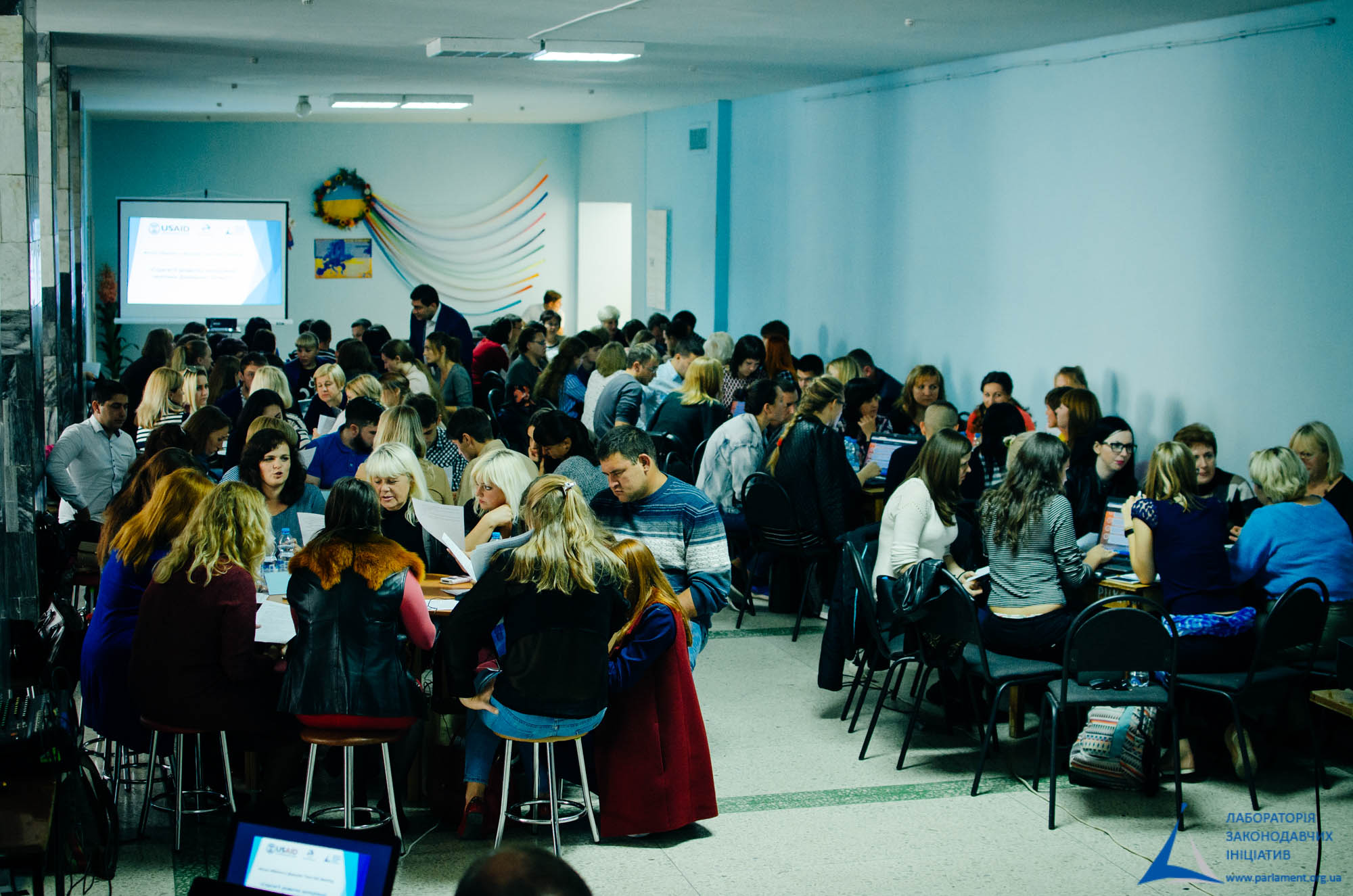 Participants of the Town Hall Meeting “Strategies the for Development of Youth Policy in Donetsk Region” discussed two issues: 1) institutionalization of youth centers, 2) organization of communication between youth centers of Ukraine. 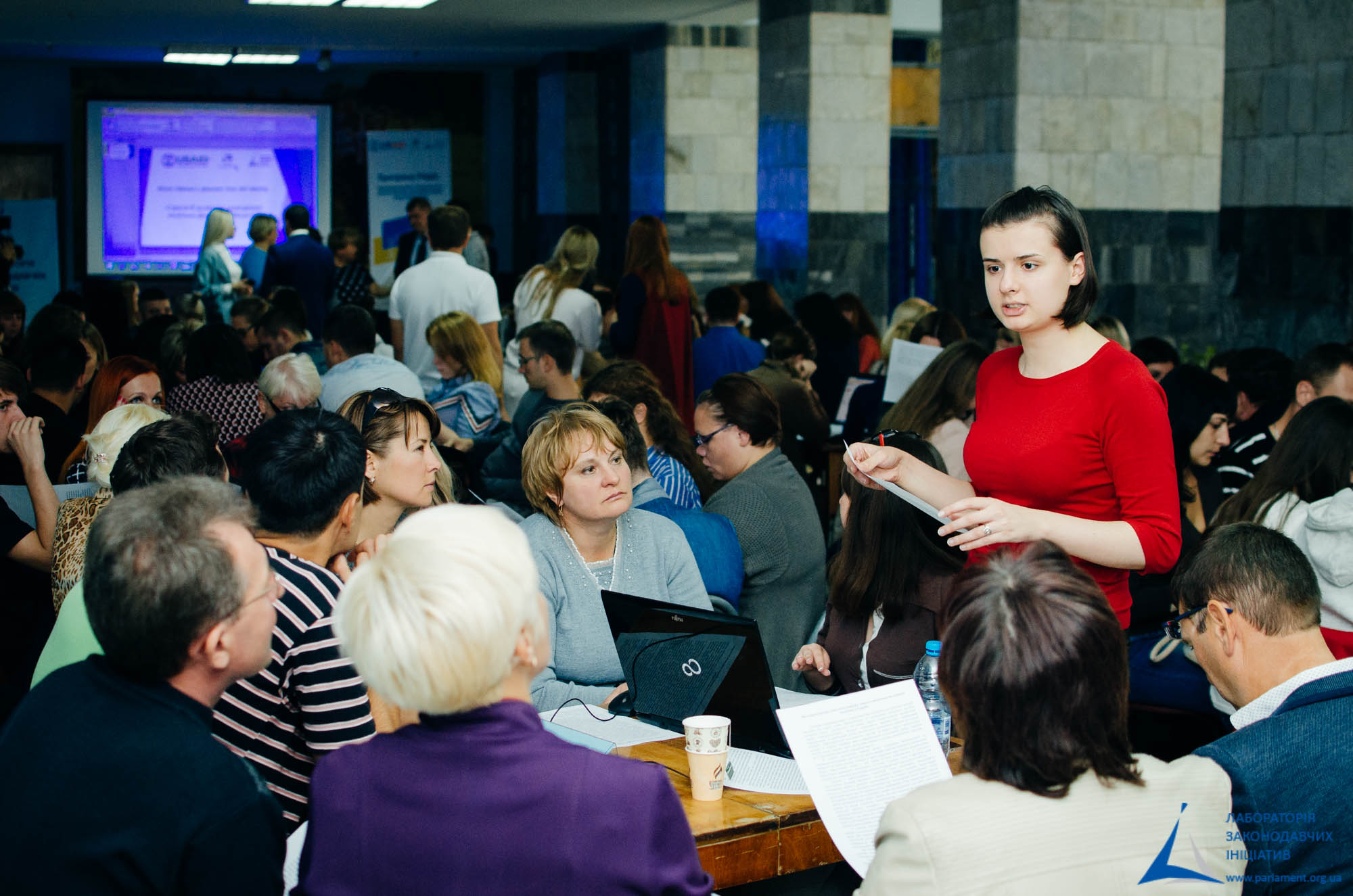 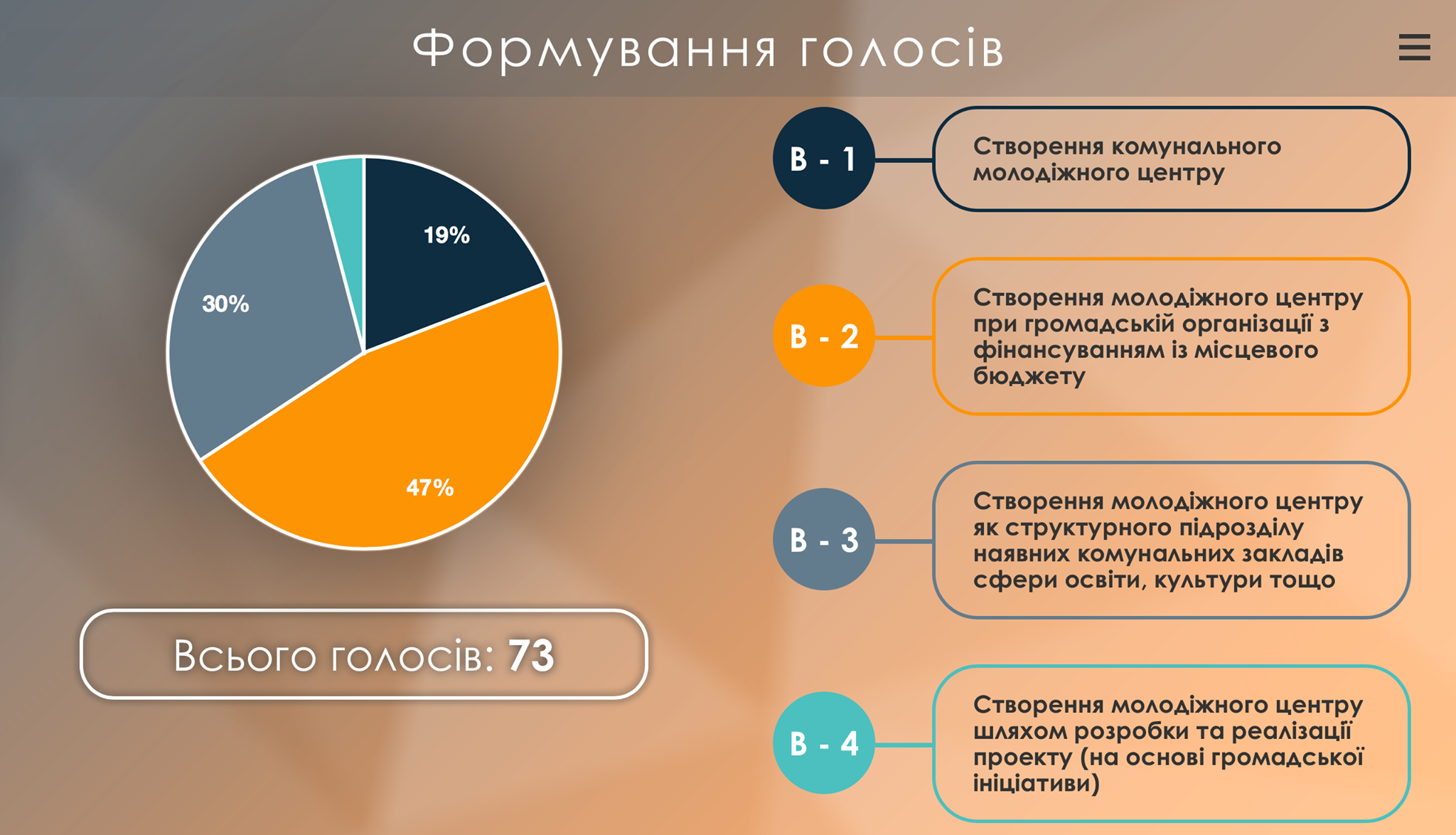 The results of the voting were as follows: the first scenario scored 19% of votes; the second amounted to 47%; the third scored 30%; the fourth numbered 4%. Thus, almost half of the participants of the discussion chose the option of creating a youth center under an NGO with financing from the local budget. 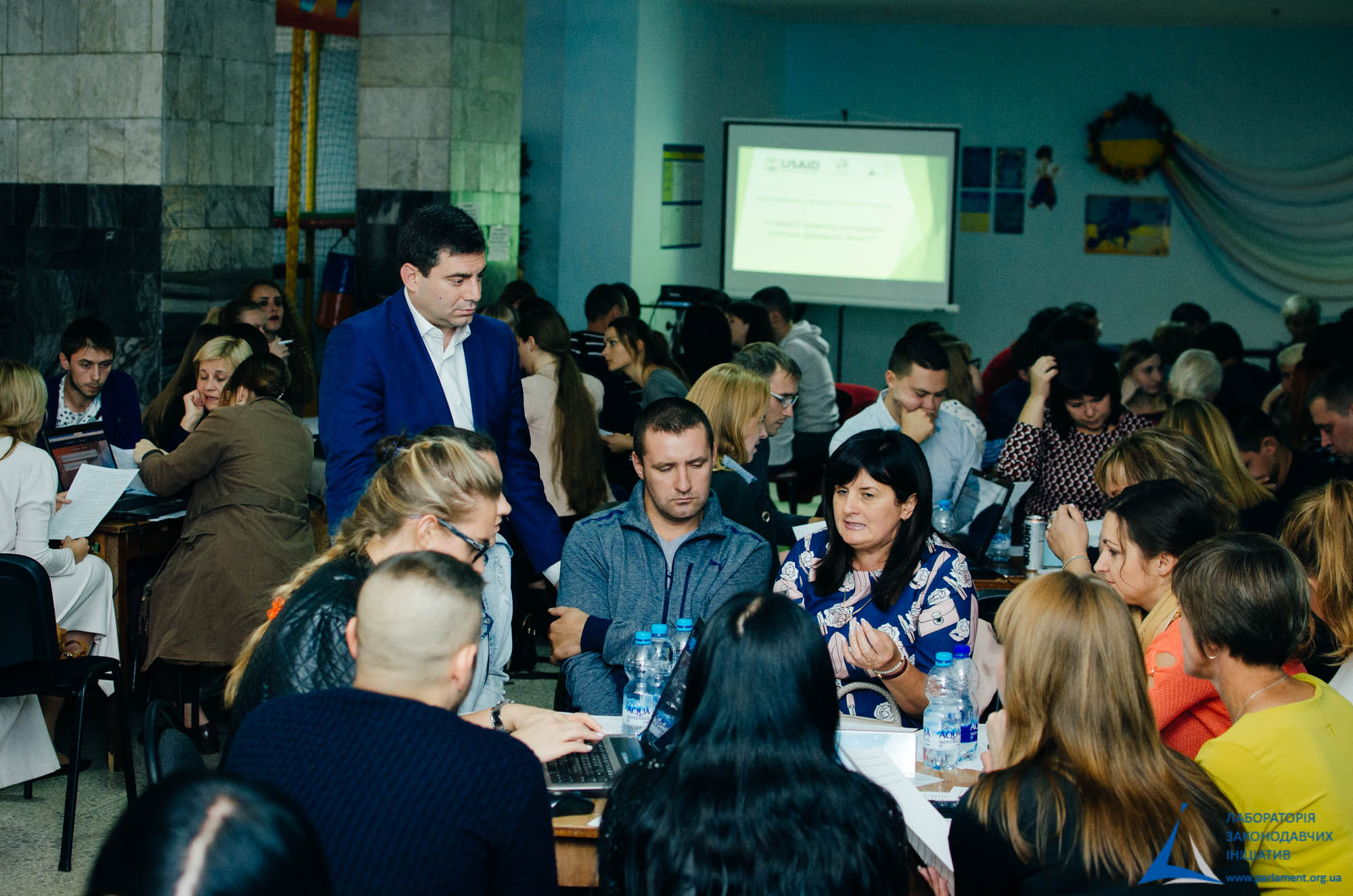 Discussing the problem of organizing communication between youth centers of Ukraine, the participants reviewed 4 scenarios, the first of which implied establishment of a coordination council under the Ministry of Youth and Sports of Ukraine; the second suggested creation of an all-Ukrainian public organization of employees and activists of youth centers; the third was about establishing a professional communication network based on an Internet platform, website (volunteer initiative); the fourth involved creation of the institution entitled National Youth Center functioning as an organizational and methodological center of the network. 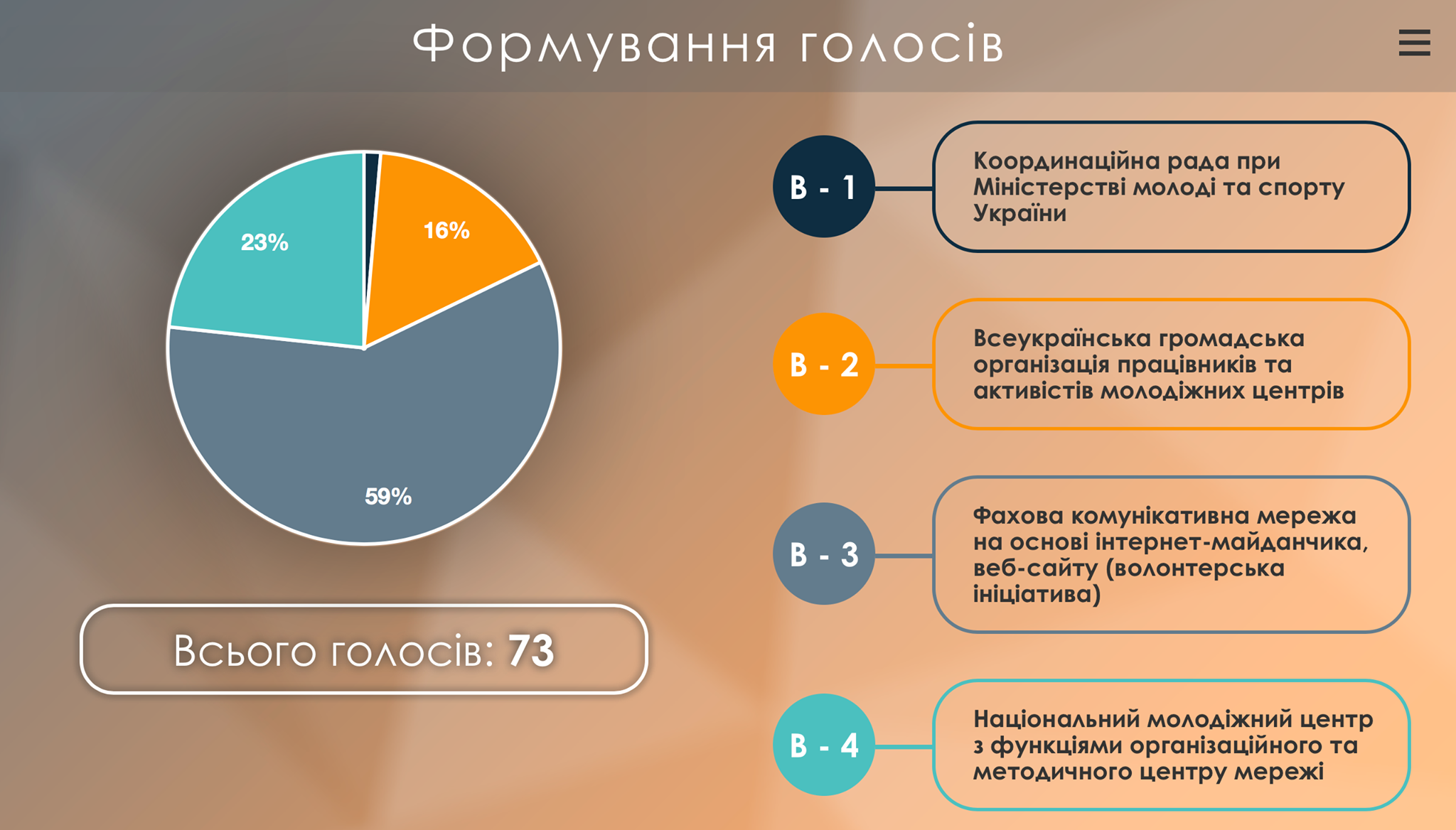 After the discussion, the participants voted in the following way: the first scenario scored 2%, the second scored 16%, the third amounted to 59%, and the fourth nembered 23%. Thus, more than half of the participants of the discussion preferred the third option, which involves the establishment of a professional communication network based on an Internet platform, website (volunteer initiative). 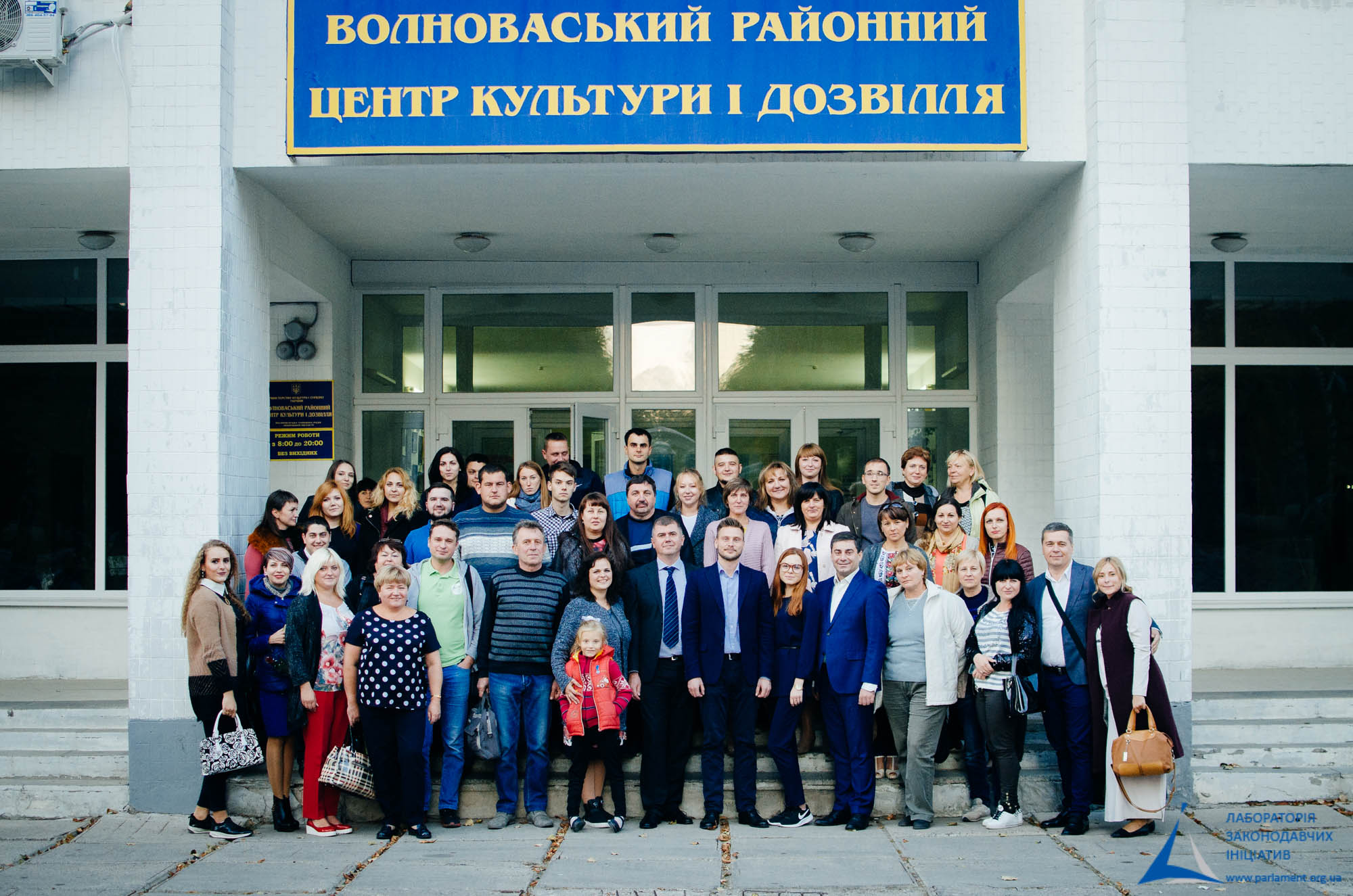 The results of town hall meetings carry no legal weight. The decisions approved within this discussion will be implemented by Mr Lubinets within his powers and capabilities as an MP.