This report has been prepared under the Agency for Legislative Initiatives Project “Support of the Democratic Political Culture in the Verkhovna Rada of Ukraine via Political Dialogue and Ethical Standards” backed by the Matra Programme (the Netherlands Embassy) in partnership with the OSCE/ODIHR “Strengthening Dialogue among Civil Society and with Key Government Stakeholders in Ukraine on Human Dimension Issues” Project, the Netherlands Institute for Multiparty Democracy (NIMD), and with the assistance of the USAID “RADA: Responsibility, Accountability, Democratic Parliamentary Representation”. 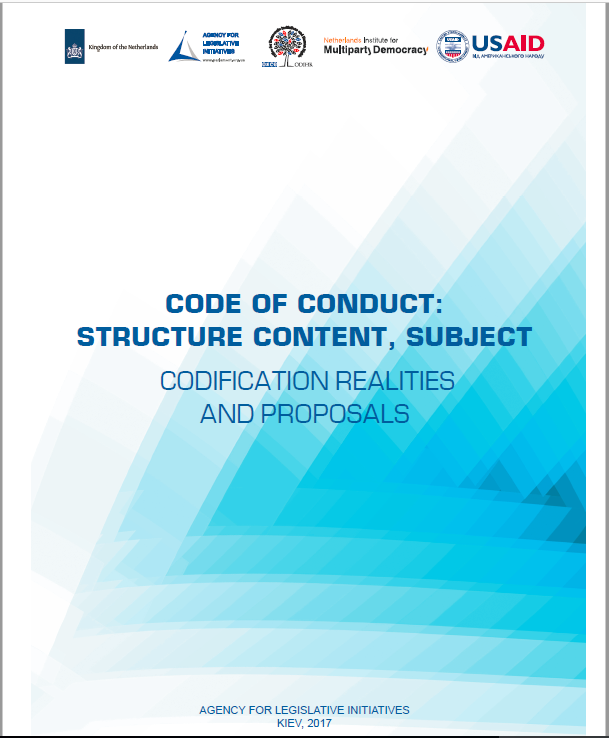 The Agency for Legislative Initiatives (ALI) project aims at improving the quality of the parliamentary process through the support of the interparty dialogue and promotion of ethical standards in the parliament, which includes:

The project shall help to improve the culture of the political communication, to strengthen the interparty cooperation, to move closer to the international standards as suggested by the Cox Mission recommendations, and to restore trust in the Verkhovna Rada of Ukraine.

This document summarises the discussions held among the Ukrainian MPs, international and OSCE/ODIHR experts, as well as other stakeholders on the basis of the dialogue platform. In addition, proposals are made to codify the existing legislation in the areas related to the Code of Conduct.

The reports based on the dialogue platform discussions should form the basis for the Parliamentary Code of Conduct and should become subject to the broader debate.