On June 30, 2017, at 12:00 am, the Volyn Orthodox Theological Academy (Lutsk, 5, Hradnyi Uzviz) hosted a Town Hall Meeting on the topic “Strategy for the Development of Youth Centers in Volyn Region”.

The event was organized by the Agency for Legislative Initiatives in cooperation with the Interns League and the Ministry of Youth and Sports of Ukraine. It was initiated by MP Ihor Huz as part of the Model District project with the support of USAID RADA Program: Responsible, Accountable, Democratic Assembly, implemented by the East Europe Foundation.

The discussion was held in the Town Hall Meeting format, which implies competent and efficient discussion of any specific issues of public interest and serves as a tool for citizen participation in governing. 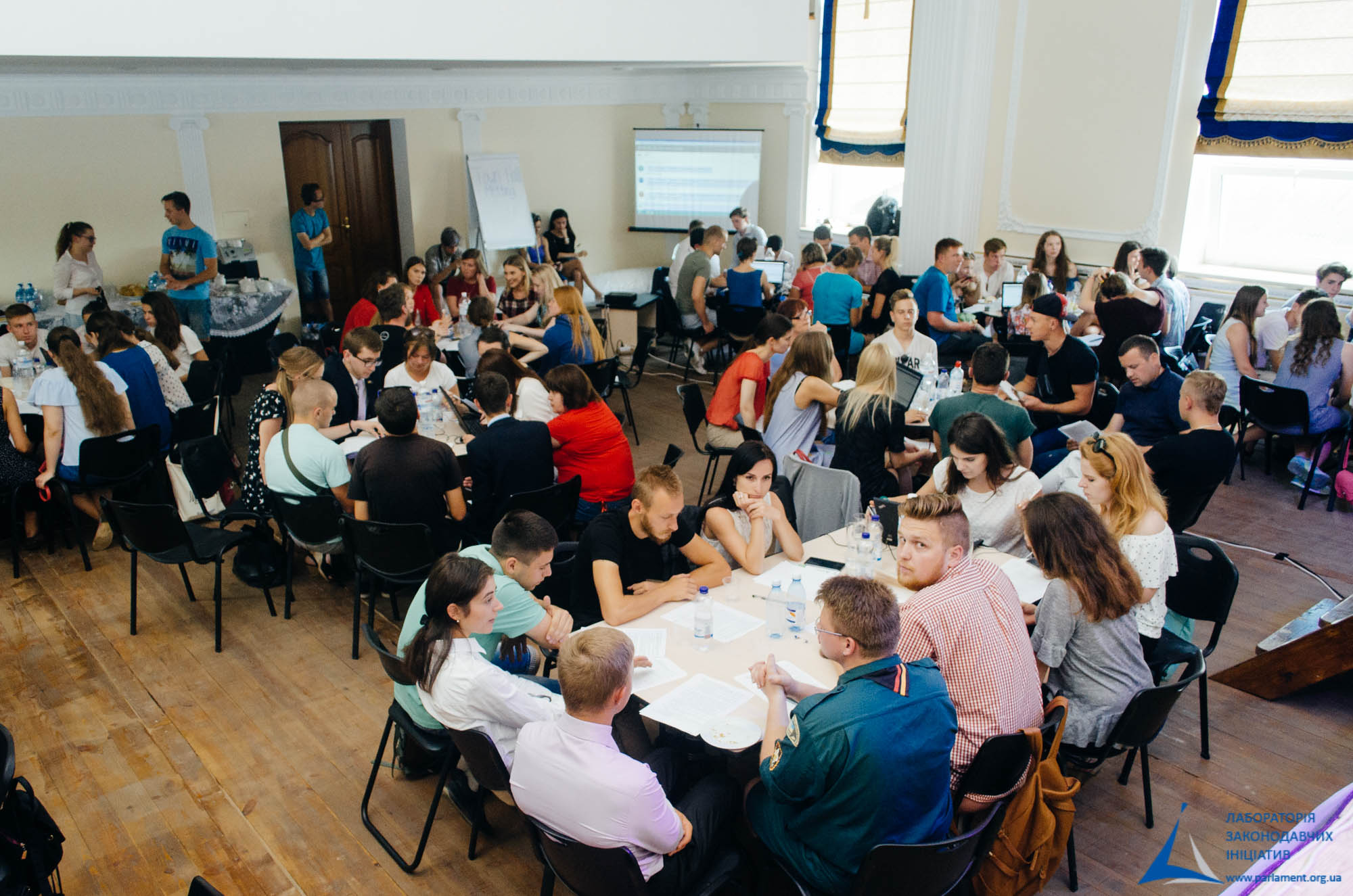 The agenda included such topics as the creation and development of youth centers, communication between youth centers of Ukraine, and work with youth with disabilities. 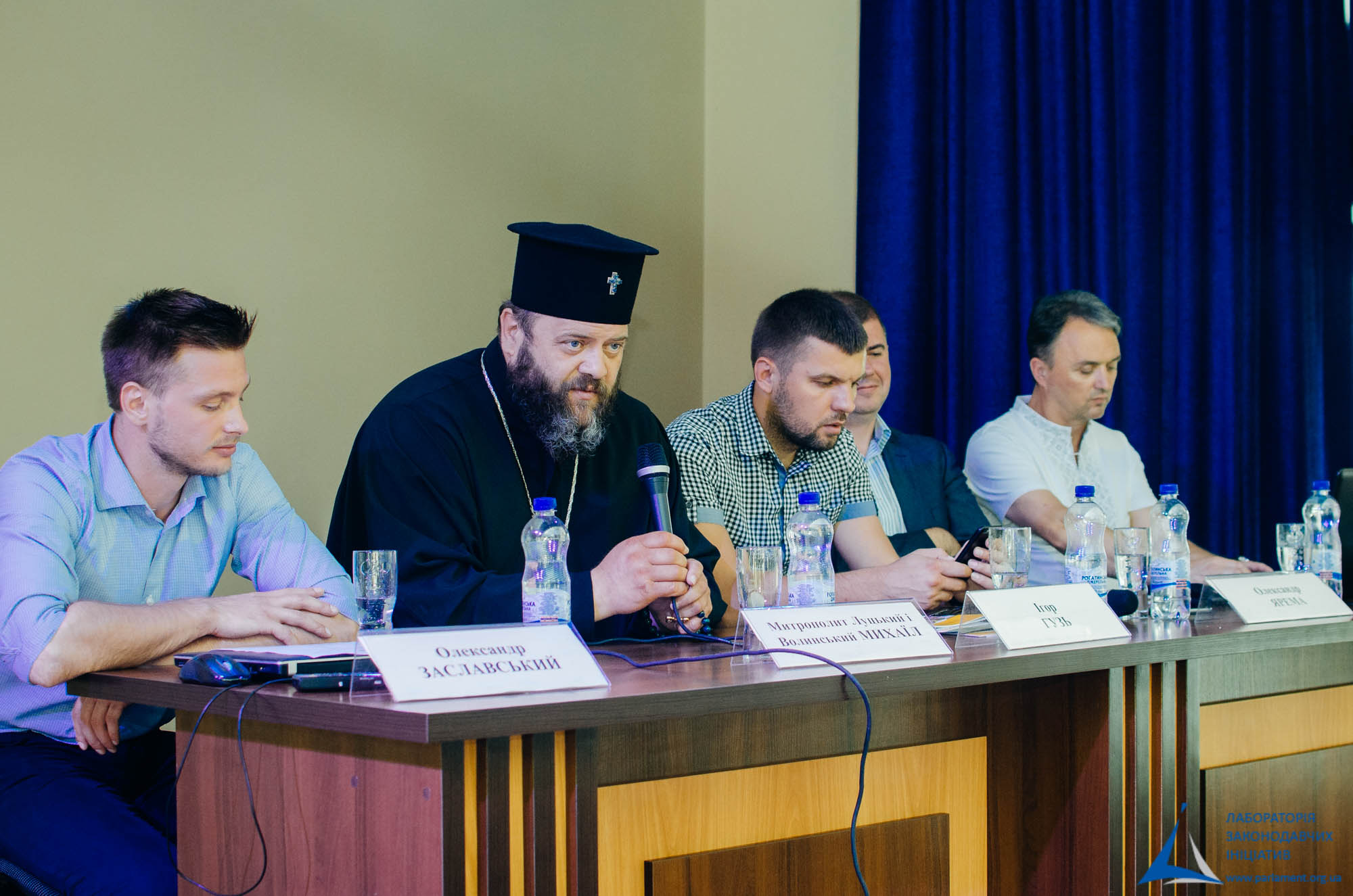 Metropolitan of Lutsk and Volyn Mikhail, Bishop of the Ukrainian Orthodox Church (Kyiv Patriarchate), Metropolitan of Lutsk and Volyn, welcoming the town hall meeting participants on the premises of Volyn Orthodox Theological Academy, observed how many young people attended the discussion of socially important issues. Recalling the words of the Gospel, Bishop stressed that it was better to be either cold or hot but it was very bad to be lukewarm, indifferent, uninterested. Metropolitan of Lutsk and Volyn Mikhail wished young people to be self-sufficient, ambitious, visionary and indomitable; he also expressed confidence that the attendees would surely find answers to their questions precisely because they persisted in looking for them. In addition, Bishop stressed that it was important not just to make a decision but to live according to the decisions that were taken that day. 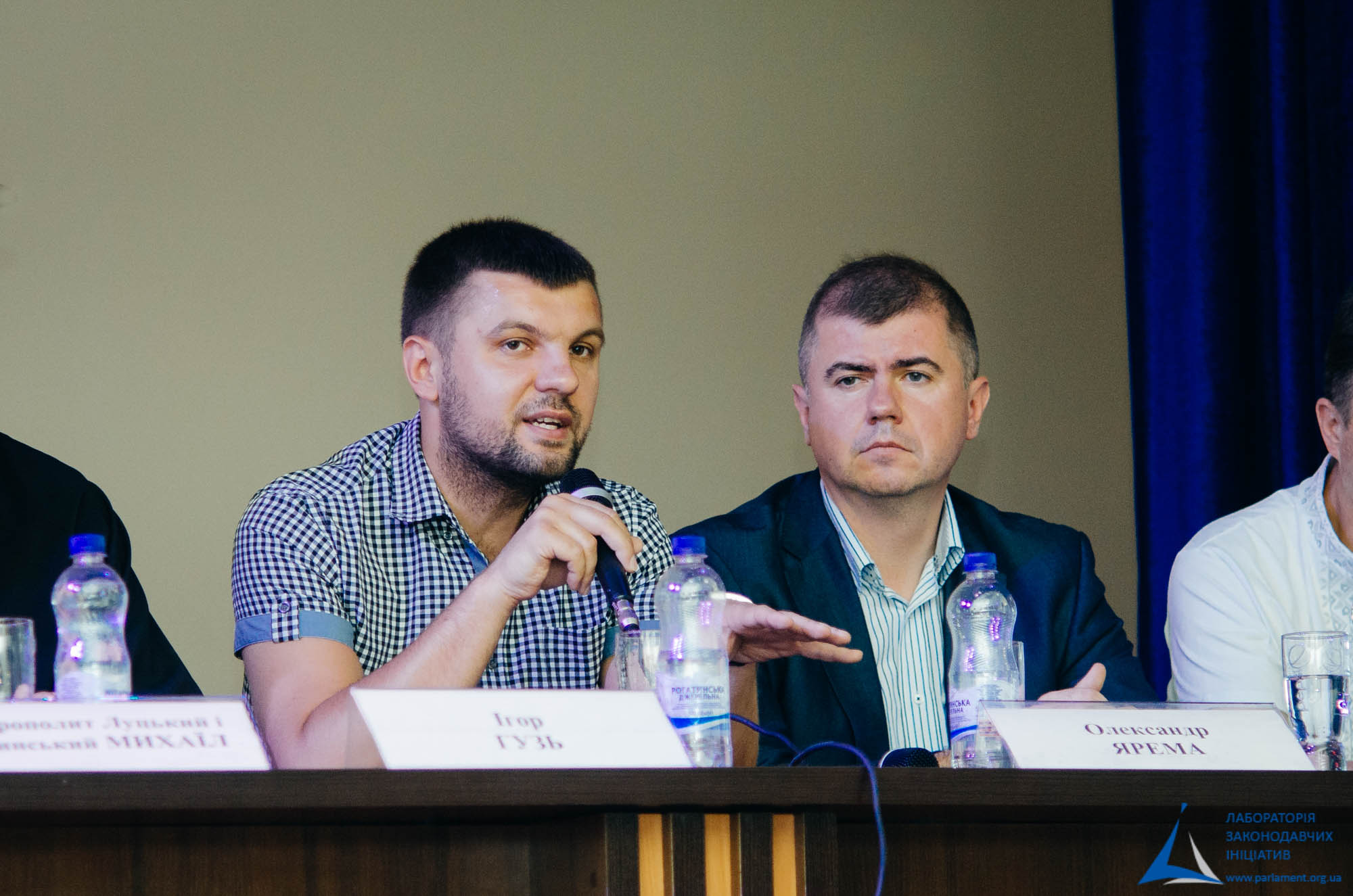 Ihor Huz, MP of Ukraine, Deputy Chairman of the VRU Committee on Foreign Affairs, stressed that the future of our country depended on each of those present in the audience rather than on the president or other officials. It was on the younger generation, their aspirations and beliefs, and their understanding of the role of men in the life of the country that the future of Ukraine depended. Ihor Huz advised young people to avoid complaining and grumbling, and to rely only on themselves. Everyone should contribute to building the future. Mr. Huz also expressed hope that despite the previous failure of voting in the Verkhovna Rada on the draft law on youth centers, it would still be approved and youth centers would be established both at the national and at oblast levels. Stressing the importance of town hall meetings devoted to youth policy, Oleksandr Yarema, Deputy Minister of Youth and Sports of Ukraine, raised the question of where young people could fulfill their potential outside educational institutions. Mr. Yarema pointed out that he had in mind a platform where young people could gather, receive information, consult, and create projects that would change the lives of others. This discussion is aimed at ensuring that Ukraine has a future. The Ministry of Youth and Sports has been creating an optimal model of youth work in united territorial communities, which prescribes who, where and based on what resources have to work with the youth. In the near future, the Ministry will hold public events to popularize the experience and practices of youth work in united territorial communities. Mr. Yarema also expressed his conviction that the results of that day’s work would be actively discussed and examined and would be integrated into legislative initiatives supported by his colleagues MPs who were present at the event. 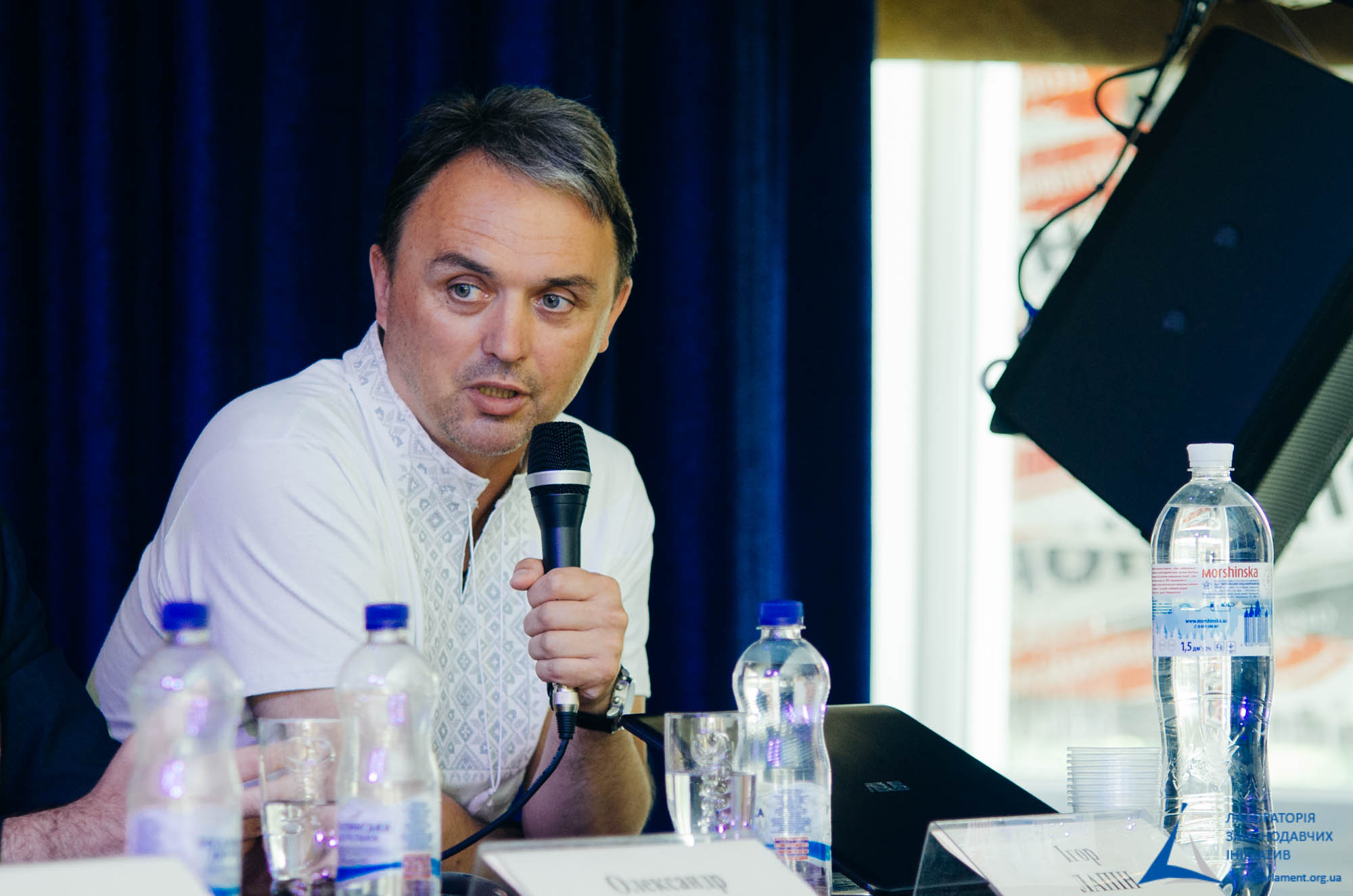 Ihor Lapin, MP of Ukraine, First Deputy Chairman of the Special Control Commission of the Verkhovna Rada of Ukraine for Privatization, stressed the need to talk about Ukraine as the land of our children rather than the land of our ancestors. For these are young people who form the future of the country by actively advocating their beliefs and values. Mr. Lapin pointed out that success can only be achieved by being open and supporting each other. Therefore, thanks to the support of all stakeholders, the law on youth will be adopted and this will open up new opportunities for the effective implementation of youth policy. Zakhar Tkachuk, Chairman of the Board of the NGO Youth Platform, director of the Volyn Youth Center, thanked all those involved in the work of the Volyn Youth Center. Explaining the importance of holding town hall meetings, Zakhar Tkachuk emphasized that it was necessary to work convincingly, i.e. by studying the problems the young are facing. This event, which involved a wide range of stakeholders, was conducted precisely in order to find out opinions of young men and women about the youth center and its future development. During the town hall meeting on the topic “Strategy for Development of the Youth Centers of Volyn oblast”, the participants discussed three issues that concerned communication between youth centers and work among youth with disabilities.

The votes were distributed as follows: the first scenario scored 20.3% of the votes, the second one scored 36.5%, the third one scored 4.1%, and the fourth one scored 39.2%. Thus, by a slim margin the participants chose the option of creating a youth center by developing and implementing a project based on a public initiative. Discussing the problem of communication between youth centers of Ukraine, the participants reviewed 4 scenarios, the first of which implied establishment of a coordination council under the Ministry of Youth and Sports of Ukraine; the second one suggested the creation of an all-Ukrainian public organization of employees and activists; the third one was about establishing a professional communication network based on an Internet platform (a volunteer initiative); the fourth one involved the creation of the National Youth Center functioning as an organizational and methodological center of the network. The participants favored the second scenario. It scored 89.2%, while the first one scored only 10.8% of the votes. It was agreed that the best option was the launch of youth centers programs for work with young people with special needs. The results of the town hall meeting are not legally valid. Ihor Huz will implement the decisions taken in the framework of this discussion within his powers and capabilities as an MP.