During the briefing MPs declared their intentions to work in the framework of the dialogue platform created to discuss ethical dilemmas and provide an inclusive environment to work on the Code of Conduct “owned” by MPs. 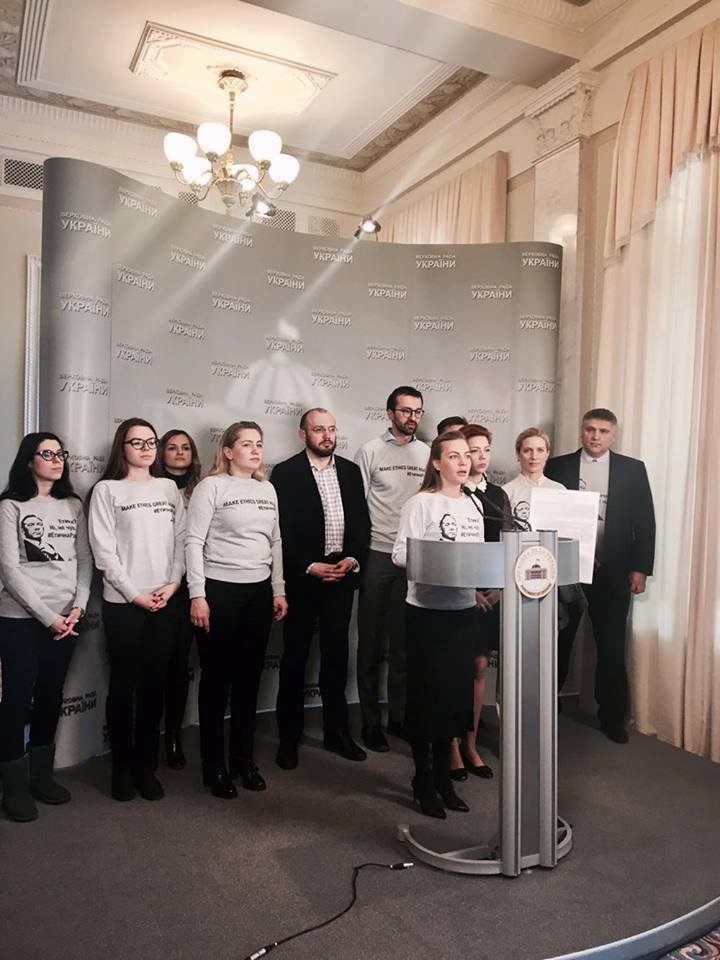 Holding this position, we as MPs have to realize the significance and responsibility of each of our action, word and decision. Ethical conduct is not only about being polite and respectful; it is also about legitimacy and importance of the parliament and parliamentarians for the society. 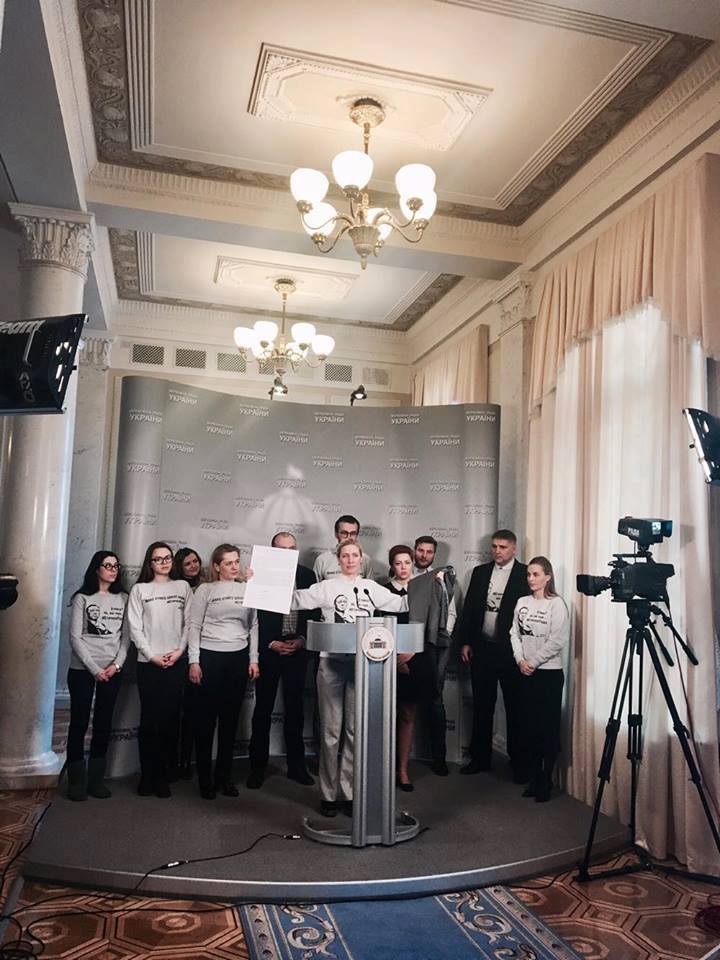 We believe that these ethical standards must be adopted in one way or another. Why? Firstly, because of the fact that our parliamentary committees are often headed by people who represent business (“Ukrzaliznytsia” – i.e. in the transport committee). This is unacceptable. The Ethical Code can solve it. Secondly, when MPs actually register their laws, in spite of the fact that the alternative one already exists for a year or two… This is such a selective legislation. Why? Because there is a solidarity. Then, some laws are given a green light, and some laws are shown a red flag. The Code of Conduct can solve it. And the last. I believe that the parliament simply has to show that ordinary people work here, the same people of whom the society consists, that has chosen us. Otherwise, I suspend that this parliament, just like the previous one, will simply be withdrawn. 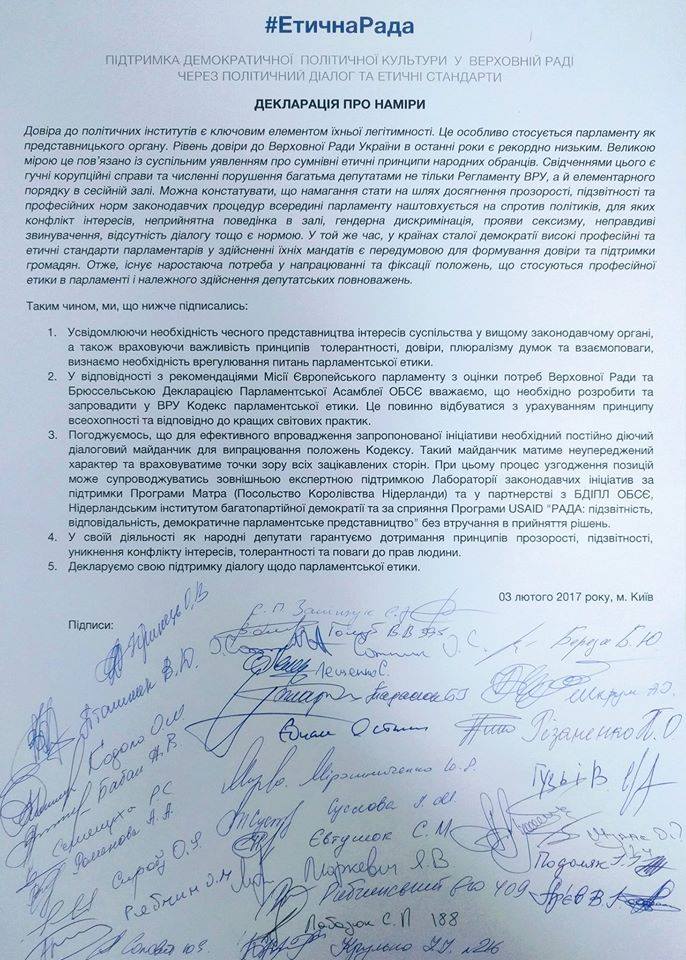 It’s for a reason that now we are not talking about the law-making process, which regulates the life of society, but we are talking about an equally important issue of ethics, those rules of behavior that people should accept voluntarily, as no laws, including the Law “On the Rules of Procedures”, can not restrain mutual hostility, mutual offenses, and sometimes even frantic fights

If we, the MPs, will not be able to behave with dignity, to eliminate the conflict of interest in our actions, to treat as a matter of principle the rules of procedures violations and other laws, we cannot rely on the help and support of the society and the world to the Parliament and to Ukraine. 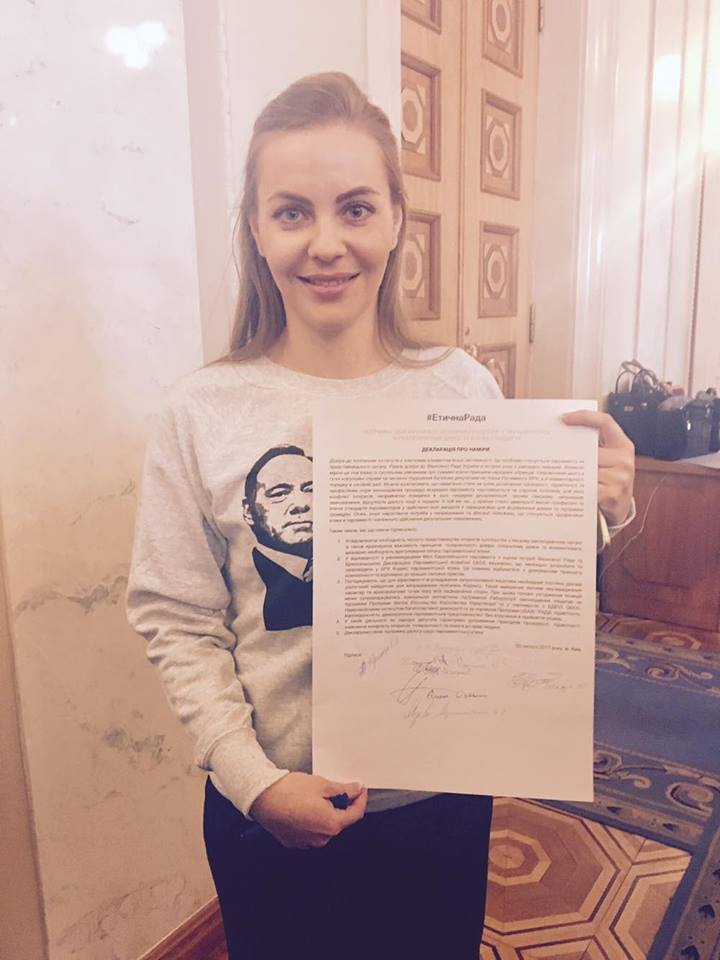 Declaration of Intent has fixated the necessity to regulate issues of parliamentary ethics and the initiative of MPs to actively participate in working out the ethical norms. MPs who participated in the briefing signed the Declaration and encouraged their colleagues to join.

The activity takes place in the framework of the Agency for Legislative Initiative Project “Promoting Democratic Political Culture in Verkhovna Rada through Political Dialog and Ethical Standards”, which is being implemented with support from the MATRA Program (Embassy of the Kingdom of the Netherlands) and in partnership with the ODIHR OSCE Project “Strengthening Dialogue among Civil Society and with Key Governmental Stakeholders in Ukraine in Human Dimension”, the Dutch Institute for Multiparty Democracy, and with the assistance of the USAID Program “RADA: Accountability, Responsibility, Democratic Parliamentary Representation”.