On November 15, the Agency for Legislative Initiatives jointly with the Netherlands Institute for Multiparty Democracy, the OSCE ODIHR, and the USAID RADA Program held a training on interparty dialogue skills for NGOs in PinchukArtCentre (Kyiv, Velyka Vasylkivska/Baseina str., 1/3-2). 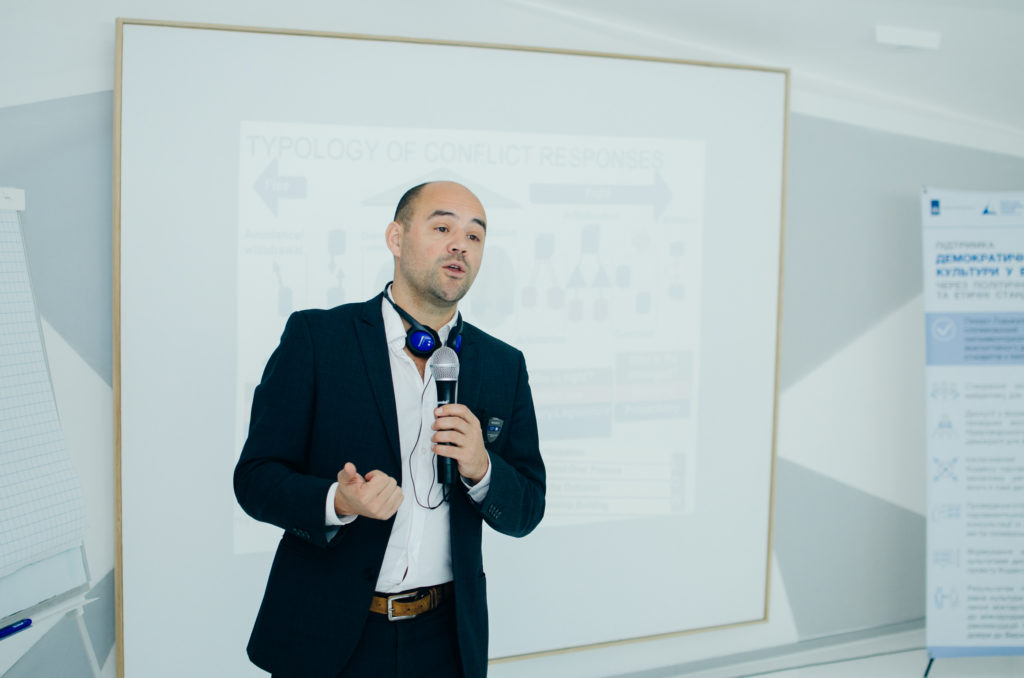 Jerome Scheltens, trainer, the Netherlands Institute for Multiparty Democracy, explained the intricacies of meaning and distinctions between “agreement” and “consensus”:

It is necessary to use “active listening” skills to correctly present your own interests and understand the interests of the other party at a deeper level before starting the dialogue. Otherwise, agreements will be reached too soon before turning into consensus. Uliana Poltavets, Program Director of the Agency for Legislative Initiatives and coordinator of the project “Support for the Democratic Political Culture in the Verkhovna Rada via Political Dialogue and Ethical Standards”, said the following:

Agreement on any professional and ethical standards that may be embodied in a Code of Parliamentary Conduct should “belong” to MPs themselves and representatives of political parties. If we want to achieve a steady improvement in the quality of the work of the Verkhovna Rada, its entities should be directly involved in the process. The project implies creating a dialogue platform for discussion of ethical dilemmas, which will provide for an inclusive process of the elaboration of a Code of Conduct for the Parliament or another mechanism to regulate parliamentary ethics, the approximation to international standards in accordance with the recommendations of the mission of the European Parliament, and the restoration of confidence in the Verkhovna Rada. During the training, Jerome Scheltens expanded on main principles of interparty dialogue, methods of determining positions, interests, needs, and other important issues.

The activity takes place in the framework of the project of the Agency for Legislative Initiatives “Support for Democratic Political Culture in Parliament through Political Dialogue and Ethical Standards” implemented with the support of MATRA Program (Netherlands Embassy) and in partnership with the OSCE ODIHR Project “Strengthening Dialogue Among Civil Society and With Key Government Stakeholders in Ukraine on Human Dimension Issues”, the Netherlands Institute for Multiparty Democracy and USAID RADA Program: Responsible Accountable Democratic Assembly.