On October 21, II Dialogues on Parliamentary Ethics took place in the Verkhovna Rada of Ukraine. Meeting participants analyzed practical cases and tried to solve ethical dilemmas. The purpose of the Dialogues is to improve the quality of the parliamentary process through the support of intra-party dialogue and promotion of ethical standards in the parliament. At the moment, there is a search for consensus on ethical standards at the regulatory level. The meeting, attended by MPs of Ukraine, was moderated by MEP Kaja Kallas. Kaja Kallas noted that the purpose of a code of conduct is to raise the professional standards of MPs, just like any other profession, i.e. lawyer or teacher. Without doubts, everyone acts within the framework of the law but some actions may be unethical. If one deputy does so, this affects the reputation of the entire parliament. Ms. Kallas emphasized,

“Parliament is not only elected by people but also represents people. The MP is a reflection of society and its values. Of course, you can rightly ask: if something is not accepted in society, why would an MP do this? However, I am convinced that deputies should be the first to set an example.” “We are convinced that dialogue format is best suited to understanding ethical standards. Now Parliament has different attitudes towards the reform of internal standards. The Code of Conduct is the last element in the Road Map of parliamentary reform, but I’m sure we will manage to make it real.” 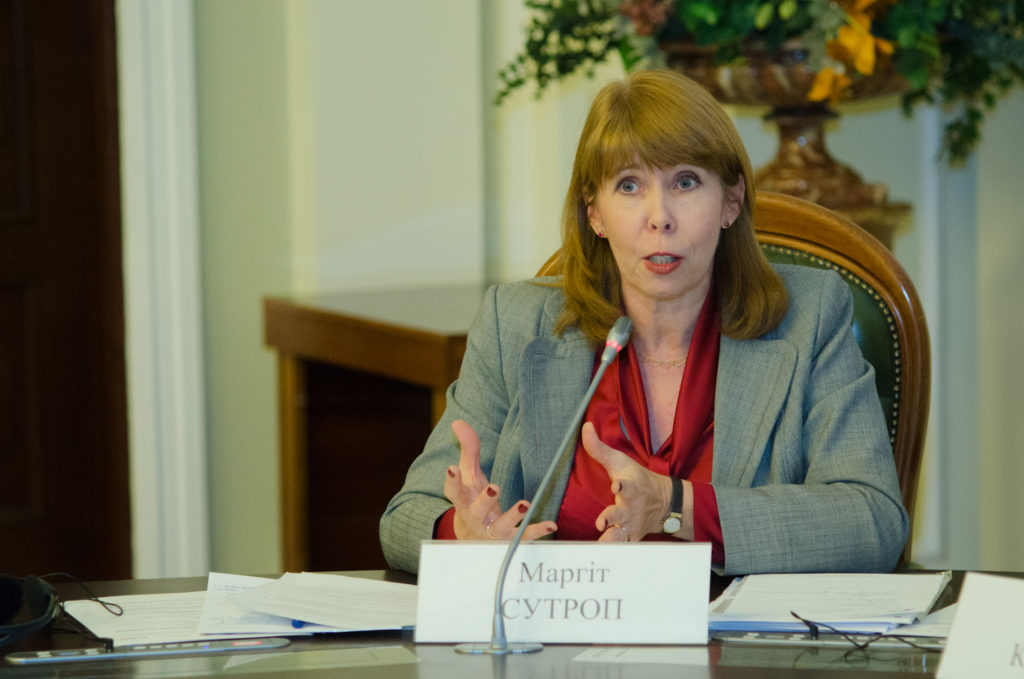 Margit Sutrop, Professor of Practical Philosophy, Head of the Center for Ethics, University of Tartu, told about the Estonian experience of adoption of the Code of Conduct.

“When we presented our research in Estonia, people told us: How can children be taught about ethical behavior if deputies behave unethically? Ukrainians must make up their minds as to the values they want to pass on to their children and grandchildren. We are in the situation of the post-Soviet society where people know that regulations and practices can be rather different. Ethics is an agreement, a consensus on common values when society moves towards greater openness. People need to understand why it is easier and safer to live in an ethical and transparent society. Deputies must show people that ethics is not only about what they say but also about the principles they live by. If there are a conflict and discrepancy between words and actions, it will be impossible to restore people’s trust.” Dirk Toornstra, Independent Parliamentary Governance Advisor, believes that the code of conduct should be shared by all members of Parliament, and one has to be careful speaking about sanctions for noncompliance.

“In any case, the code should not become an instrument of political lynching,” pointed out Mr. Toornstra. The meeting was held within the framework of the project of the Agency for Legislative Initiatives aimed at improving the quality of parliamentary process by supporting international dialogue and promoting ethical standards and implemented with the support of Embassy of the Netherlands in Ukraine and in partnership with OSCE Office for Democratic Institutions and Human Rights (ODIHR), RADA Program, and the Netherlands Institute for Multiparty Democracy.

During the events, an inclusive dialogue platform was created to discuss ethical dilemmas. It will serve as the basis for the elaboration of a Code of Conducts for the Verkhovna Rada of Ukraine.